The San Francisco initiative is an assault on Jewish religious liberty.

On the ballot in San Francisco this fall will be a proposal making it a crime to circumcise male children. If the measure passes, anyone convicted of circumcising a baby boy could be fined up to $1,000 and sentenced to a year in prison. Even for San Francisco, this is madness.

The circumcising of newborn boys is perhaps the most familiar type of surgery in the United States. According to the federal Agency for Healthcare Research and Quality, US hospitals perform the procedure more than 1.2 million times each year. While there are wide variations by ethnicity and region, and while circumcision rates have declined in recent years, the great majority of American men are circumcised. And in nearly every case, the decision was made for them in their infancy by their parents -- just like the decision to breastfeed or bottle-feed, or to use cloth or disposable diapers. Even in the most childless major city in America, it's hard to see voters approving what would be an egregious infringement on parental rights.

The health benefits of circumcision are clear, if modest. The Mayo Clinic website reflects the medical consensus, noting that circumcised men and boys generally have a lower risk of urinary tract infections, penile cancer, and sexually transmitted diseases; and that circumcision makes genital hygiene easier. At the same time, Mayo endorses the view of the American Academy of Pediatrics, which doesn't consider the advantages of circumcision compelling enough to recommend that infant boys be circumcised as a matter of routine. The academy's bottom line is commonsensical: "Because circumcision is not essential to a child's health, parents should choose what is best for their child by looking at the benefits and risks."

Reasonable people can and do disagree. But there is nothing reasonable about the fanatics trying to make it a crime.

In short, circumcision is something about which reasonable people can and do disagree. But there is nothing reasonable about the fanatics trying to make it a crime. 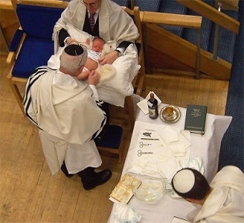 Circumcision, a fundamental rite in Judaism, has been
a part of Jewish life for nearly 4,000 years.

The ballot campaign in San Francisco is being spearheaded by a group of self-described "intactivists," political crusaders obsessed with the preservation of foreskins. Their mania might be laughable if not for two things: (1) they hijack terminology used to describe a dreadful type of violence against girls and women, and (2) they are attempting to criminalize a fundamental rite of Judaism.

The two are not remotely comparable. "Female genital mutilation has no known health benefits," the World Health Organization and nine other international organizations stressed in a 2008 report on the scourge, which persists in much of Africa and the Middle East. "On the contrary, it is known to be harmful to girls and women in many ways." It is painful and traumatic; it makes childbearing "significantly" more risky; and it leads to higher rates of post-partum hemorrhaging and infant death. Long-term consequences of female genital mutilation "include chronic pain, infections, decreased sexual enjoyment, and psychological consequences, such as post-traumatic stress disorder."

By contrast, the WHO report emphasizes, "male circumcision has significant health benefits that outweigh the very low risk of complications." Of particular importance in regions ravaged by AIDS, "circumcision has been shown to lower men's risk for HIV acquisition by about 60 percent." Precisely because circumcision is so benign, WHO and the other agencies are at pains to distinguish it from female mutilation, which is always dangerous.

Dangerous in quite a different way is the San Francisco initiative's assault on Jewish religious liberty. Circumcision is the oldest practice of the world's oldest religion. Irrespective of any medical value, it is the sign in the flesh that for nearly 4,000 years has marked Jewish males as heirs to the ancient pact between Abraham and God. Many Muslims also circumcise their sons for religious reasons.

But the law proposed by the "intactivists" radiates hostility to traditional religious belief: "No account shall be taken of the effect on the person on whom the operation is to be performed of any belief on the part of that or any other person that the operation is required as a matter of custom or ritual."

The campaign to enact a law banning the most enduring obligation in Jewish experience amounts to what the American Jewish Committee calls a "direct assault on Jewish religious practice in the United States. . . . unprecedented in American Jewish life."

Fortunately, even in California most ballot issues are rejected. When San Franciscans vote this fall, the disgraceful anti-circumcision initiative deserves a decisive defeat.