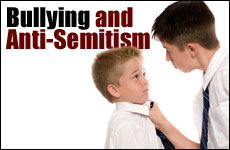 How the Jewish people are like the bullied kid in the schoolyard.

How do you stop bullying? Jodee Blanco, author of the best-selling book, Please Stop Laughing at us… One Survivor’s Quest to Prevent School Bullying, has a number of insights that should be of particular interest to Jewish readers.

In her campaign to combat bullying by better understanding it, Ms. Blanco has coined a number of phrases to illuminate the social dynamics that divide children – and sometimes adults – into predators and prey.

Elite Tormentors are those who exploit their popularity as a weapon for inflicting pain upon their victims. They often use aggressive exclusion, which is characterized by the calculated omission of attention through ignoring and isolating, tactics more subtle than physical or verbal violence but no less cruel. Once a bully chooses his target, onlookers will quickly distance themselves from the victim rather than risk becoming targeted themselves.

Even more subtle, and somewhat more mysterious, is arbitrary exclusion, whereby a friend or group of friends will suddenly turn upon one of its own, often for no identifiable reason. In an instant, without cause or explanation, the victim goes from insider to outcast.

The typical bullying victim is an "ancient child," an individual possessing a more developed sense of empathy than his peers.

Based upon countless interviews and observations, Ms. Blanco has arrived at an intriguing hypothesis explaining why social groups separate themselves into bullies and bullied. She describes the typical bullying victim as an ancient child, an individual possessing a more developed sense of empathy than his peers. By consciously or unconsciously flexing his “compassion muscle,” this little adult sets himself apart from his less sensitive peers who may come to feel inferior in the presence of greater emotional maturity and threatened by a response mechanism that they cannot understand. Once a tormentor targets his victim, others will readily fall into line behind him.

Conversely, the most likely candidate to become a bully is the individual afflicted by empathy deficit disorder, one who possesses such an underdeveloped level of sensitivity that he seems incapable of feeling any compassion whatsoever. The tragic irony is that the victim, unable to conceal his own hyper-developed sense of empathy, becomes despised for his atypical maturity by the individual who stands to benefit most by learning from his example. Nevertheless, human beings detest change by our very nature, and we cling at all costs to a psychological and emotional inertia as real and inviolable as the physical inertia that inclines all material objects toward a state of rest.

On a deeper level, Ms. Blanco’s thesis suggests an application far more universal than the school yard or occasional adult pathology. Consider the question of the sages, when they asked why the site of the revelation and the giving of the Torah is called Sinai? Because, answers the Talmud, it spawned sinah – hatred in Hebrew – among the nations of the earth. Ironically, the same Torah that enables us to become a “light to the nations” is itself the source of anti-Semitism.

The same Torah that enables us to become a “light to the nations” is itself the source of anti-Semitism.

What is the effect upon the Jewish people of having received the Torah? As a guide to spiritual refinement, the Torah teaches us how to control and channel our emotions and impulses, thereby accelerating our moral and empathic maturity. If all the nations of the earth are God’s children, the Torah has made the Jews His most “ancient” child.

And how has the world responded? Nations have ostracized us, have gone to war against us, have perpetrated genocide against us in a mad passion to destroy us, even if that meant destroying themselves in the process. The Babylonians and the Persians, the Greeks and the Romans, the Canaanites and the Amolekites, the Crusaders and the Inquisition, the Nazis and the Stalinists – every great nation and movement across the span of human history has become a tormentor of the Jewish people, despising us for the ancient child within us.

Not only have we suffered the “aggressive exclusion” of violent national ostracism among the community of nations, but also the more insidious “arbitrary exclusion.” We have lived for generations among peoples whose nations, after flourishing through our social, cultural, and economic contributions, turned against us with unfathomable caprice and stripped us of our human dignity without the slightest provocation.

In her advice to victims, Ms. Blanco asserts that the most effective response to bullying is to stare down the tormentor, without emotion or fear, and command him to stop. Although this may intensify his hostility in the short-run, if repeated again and again it ultimately fosters a grudging respect. So too, in the face of a world community eager to condemn Israel and the Jewish people for insisting upon our most basic rights of survival and self-determination, the only response available to us is to stand firm, assert the truth, and continue to demonstrate our loyalty to a Higher Authority and our commitment to the highest standard of moral conduct.

Ultimately, it is we who will determine whether or not the Torah continues to bring hatred between us and the peoples of the world. When the Jewish people follow the precepts of the Torah faithfully, when we speak out for moral truth without apologetics and without embarrassment for our commitment to Divine justice, when we stand up against both the overt anti-Semitism of violent ideologues and the insidious anti-Semitism of political correctness and moral equivalence, then we will succeed in fulfilling our mission as a light to the nations.

Bring Shabbat Home: Live Pre-Shabbat Event
Why Are The Prayers Of Yom Kipur So Repetetive?
Ha'azinu 5783: A Time for Unity!
Twisted Thinking
Comments