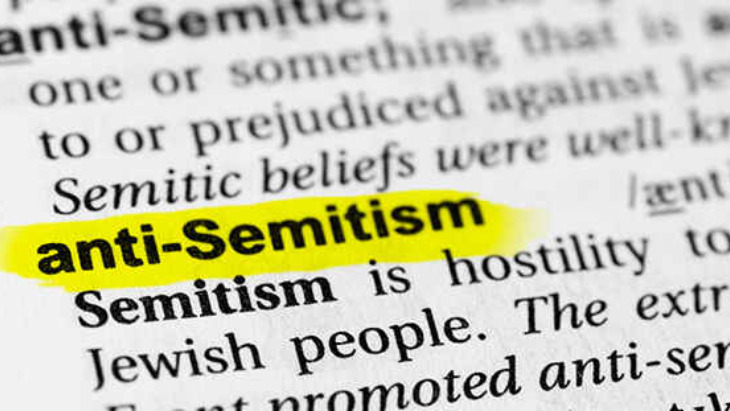 Why dropping the hyphen in 'anti-Semitism' is actually a big deal.

It isn't often that a hyphen, or the absence of one, draws attention. But when the Associated Press announced recently that it was changing the spelling of "anti-Semite" and "anti-Semitism" in its highly influential style guide to "antisemite" and "antisemitism," it made news – and drew cheers from historians and civil rights activists.

There is a good deal of history behind that detail of punctuation, and it begins with the fact that the father of "anti-Semitism" was an antisemite.

In 1879, a German nationalist and political agitator named Wilhelm Marr published a pamphlet in which he claimed that Jews were the mortal enemy of the German people and called for their forcible removal from German soil. His document, Der Weg zum Siege des Germanenthums über das Judenthum ("The Road to Victory for Germanness over Jewishness"), argued that Jews posed a particularly dangerous threat not simply because of their religion or behavior, but because they belonged to an alien racial group – the "Semites." Marr wanted a word that would imbue his loathing of Jews with the ring of sophistication, so rather than speak of primitive Jew-hatred (judenhass), he promoted the pseudoscientific term antisemitismus – enmity toward the Semitic race. But there was never any doubt about the meaning of his neologism. Antisemitismus – which became antisémitisme in French and antisemitismo in Spanish – meant only one thing: hatred of Jews. And when Marr founded a new political organization, the League of Antisemites (Antisemiten-Liga), it had only one purpose: to ignite anti-Jewish bigotry into a political movement.

When the term entered the English language in 1893, however, it became "anti-Semitism." That is how it has typically been spelled ever since.

But as scholars have long pointed out with consternation, that hyphen and upper-case "S" were a mistake. There is no such thing as Semitism or a Semitic race. "Semitic" is a term in linguistics; it denotes a family of North African and Middle Eastern languages, including Akkadian, Amharic, Hebrew, Arabic, Aramaic, and Ugaritic. But people who speak those languages are not "Semites" anymore than people who speak one of the Romance languages – Spanish, Portuguese, French, Italian, Romanian, and Catalan – are "Romantics."

Like countless Jew-haters through the ages, Marr made no secret of his animosity, but wanted to cloak it in respectability. So he gave it a name, "antisemitism," that didn't actually mention Jews – not unlike the way racists and nativists a century ago sanitized their bigotry by calling it "eugenics." It was unfortunate that Marr's euphemism came into common usage at all, but the orthography it acquired in English made matters worse. The hyphen, by explicitly turning "anti" into a prefix, encouraged the falsehood that the word adopted by Marr and his followers referred to hostility toward "Semitism" and "Semites."

That is why scholars and Jewish institutions have argued for decades that the word should be "antisemitism" – with no hyphen or upper-case "S," as in every other language. "Why do I spell antisemitism without a hyphen?" asked Emory University historian Deborah Lipstadt, whose highly regarded book Antisemitism Here and Now was published in 2019. "Because antisemitism is not hatred of Semitism or Semites – people who speak Semitic languages. Antisemitism is Jew hatred."

Without the hyphen, it becomes easier to recognize "antisemitism" for what it has always been: a generic, undivided word for the hatred of Jews. Obviously it doesn't change the etymology of the word or eliminate Marr's racist motive in using it, but it no longer legitimizes it, either.

A change in punctuation will not undo what has often been called the oldest hatred, or even slow its alarming global rise. But it will at least help to clarify, as the Anti-Defamation League observes, that "hatred toward Jews, both today and in the past, goes beyond any false perception of a Jewish race." Jews can be found across the racial spectrum, even as they can be found in every economic stratum and in every political party. Jews are not united by a single religious identity, a single national affiliation, a single DNA sequence, or even a single definition of what it means to be a Jew.

The only thing all Jews can be said to have in common is that they belong to a minuscule people with an ancient history, and that there have always been those prepared to revile them, for reasons as inconsistent as they are irrational. The AP Stylebook change is admittedly a tiny thing. But it will weaken, at the margins, the racial pretext that has animated far too many Jew-haters, both in Marr's era and in ours. There will always be antisemitism, alas. But "anti-Semitism" has at long last been cancelled, and that is a change to be welcomed.

My Experiences as a Black Orthodox Jew
Blessing on Chewing Gum
Was Rahab a Prostitute?
Extras In Our Own Epic
Comments
MOST POPULAR IN Current Issues
Our privacy policy