The Significance of the Spanish Elections 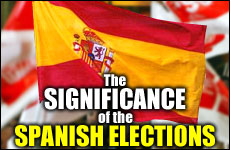 Another unfortunate example of classical appeasement.

The March 11 train bombings in Spain were not only an immense human tragedy, with more than 200 killed and over a thousand wounded, but a disaster for the Western world. They demonstrated that Al Qaeda retains the ability to mount highly coordinated and lethal operations in the heart of Europe, despite the killing or capture of most of its top leadership over the past two years.

But the prime importance of last week's events in Spain lies in what they reveal about the state of the Western mind. Finding themselves the target of terrorism, Spaniards' primary reaction was not to direct their fury at the terrorists but at their own government. Their first question was, "What have we done to make Al Qaeda angry?" And the answer they gave was to blame Prime Minister Jose Maria Aznar for allying with the United States to liberate Iraq and stationing Spanish troops there. In short, the reflexive response of classical appeasement.

The timing of the attacks leaves no doubt that Al Qaeda's immediate goal was to influence the outcome of the Spanish election. And in that they have been entirely successful. Prior to the bombings, all Spanish polls showed the Popular Party of Prime Minister Jose Maria Aznar well ahead. In the aftermath of the train bombings, however, the Socialist Party, which opposed Operation Iraqi Freedom and pledged to bring Spanish troops home from Iraq, swept to victory. (The government's clumsy attempts to blame the attack on the ETA Basque separatists did not help its cause either.)

What the Spanish electorate, and with it most of the West, still has not grasped is that it is engaged in a death struggle with radical Islam.

Terrorists have thus succeeded in determining the election results in a major Western democracy. That dramatic success -- almost as dramatic in its own way as 9/11 -- can only confirm the jihadists' contempt for the weakness and the cowardice of the West and whet their attempt for further attacks at the heart of Europe.

What the Spanish electorate, and with it most of the West, still has not grasped is that it is engaged in a death struggle with radical Islam. Whatever minute plausibility there was to the view of radical Islam as a movement with defined, rational objectives when Osama bin Laden was still ranting about the defiling presence of infidels in the Land of the Two Mosques (Saudi Arabia) disappeared along with the removal of American troops from Saudi Arabia.

In the war of Islam on the West, the jihadists are willing to overlook everything else. That is why Al Qaeda cooperated with secular Baathist elements in Iraq both prior to Saddam Hussein's overthrow and afterwards.

Hatred of the West is a natural outgrowth of the twisted worldview of the jihadists. They view the world in terms of an epic struggle between two religions, with the wrong one presently winning. This religious component adds the lethal element to the normal hatred of the weak and poor for the strong and rich.

In the war declared by the jihadists, nothing short of returning the Iberian Peninsula to its former Moslem rulers and accepting dhimmi status would remove Spain from their sights. The failure of Spaniards this week, and virtually the entire West in the run-up to Operation Iraqi Freedom, to recognize what is at stake is a truly ominous portent for the future.

Daniel Pipes wrote four years ago, apropos of the Palestinian-Israeli conflict, that history shows that victory usually belongs in the long run not to the side with greater military or economic power but to that with the greater will and belief in its cause. The will of the West is today being tested in place after place. And the preliminary signs are far from encouraging.

The evidence grows daily that Iran seeks to be the second possessor of an Islamic nuclear bomb, and yet the response of the West to this threat remains at best sporadic and faltering. Even as the examples multiply of Iranian deception concerning the advanced state of its plutonium enrichment efforts, the Europeans continue to opt for a policy of "constructive engagement" rather than one of tough sanctions against Iran for fear of losing lucrative contracts. That focus on short-term gain without regard to the long-term risk is characteristic of the appeasement mentality.

The one nation whose leader has consistently understood the need for a powerful response to the threat of radical Islam and the necessity of projecting strength and resolve is America. And even here, the picture is not unmixed.

Establishing any semblance of a stable, representative government in Iraq will neither be quick or easy, and it may not be achievable at all. Yet the maximum effort must be made. No other Arab state provides a comparable opportunity to reverse the pattern of endemic failure that characterizes the entire Arab world, and which makes it one large festering sore producing a pus of hatred directed at the West.

Nothing strikes more fear into the hearts of the jihadists than that a modern state with Western freedoms might emerge in Iraq. The recently discovered letter by top Al Qaeda honcho Abud Musab al-Zarqawi in which he laments the emerging gap between Islamic radicals and the people of Iraq, which would be sealed for good by the emergence of democracy, is a case in point.

Yet bringing such a state into being will take time and vast resources. As Bernard Lewis pointed out in a lecture at the Hebrew University last week, if America contents itself with quick elections and early withdrawal, without laying the basis for a civil society, the likeliest result will be something like the murderous decade long civil war in Algeria, which was triggered by the victory of Islamic parties in the nation's first elections.

On this score, there are worrisome signs concerning the Bush administration's determination in the midst of an election year. The eagerness to turn over supervision of elections to the U.N., never a body noted for its commitment to democracy, and the concern with establishing an expedited schedule of troop withdrawal are not propitious omens.

For their part, the Democrats are lost in a pre-9/11 time warp. John Kerry offers the painless nostrum of improved law enforcement and better intelligence as the proper response to terrorism. The Clinton administration treated the first World Trade Center bombing as a law enforcement problem of rounding up a few bad apples, and the destruction of the WTC was the result. Kerry offers more of the same. With the sole exception of Joe Lieberman, every Democratic primary candidate either ran against the Iraq war or the large commitment to the rebuilding of Iraq.

The beneficial results of the projection of American power in the Arab world have become plainer than ever. Besides the opportunities now afforded by Iraq, the single most salutary recent development is Libya's decision to abandon its advanced program for joining the nuclear club -- a program about which the chief international inspection agency, the International Atomic Energy Agency, was clueless until the Libyans themselves revealed it. The Libyan decision has one, and only one, proximate cause: fear of the American might seen on display in Iraq.

Yet the Democrats would turn America into a Gulliver willingly submitting to be tied down by the Lilliputians. How else to describe their obsession with multilateralism? To the multilateralists, represented by the Democratic Party, American power represents not the best hope for mankind but the greatest threat. They would subject America to the whims of European appeasers and the U.N.

The multilateralists mania for international treaties, which do nothing to restrain rogue states, and their endless whining about following proper procedures is based, as Charles Krauthamer points out, on a utopian dream of fashioning an international order on the model of domestic civil society in advanced democracies.

But that model is hopelessly flawed. Unlike domestic civil society, the international community lacks any central authority with the power to enforce its rules. Nor do the nations of the world -- take for instance Britain, Cuba, and Zimbabwe -- share the common values that make civil society possible.

The Spanish elections demonstrate that the Europeans have not yet comprehended the new reality revealed by 9/11. They are repeating, with far less justification, the mistake made by Chamberlain of treating those bent on their destruction as rational calculators, who can be bought off by tactical concessions. But the even greater fear is that the next American elections might show that Americans too have unlearned the painful lessons of 9/11.

London Calling
The Blue Beyond
Great Place to Live
Is Eating Supposed To Be Spiritual?
Comments
MOST POPULAR IN Current Issues
Our privacy policy