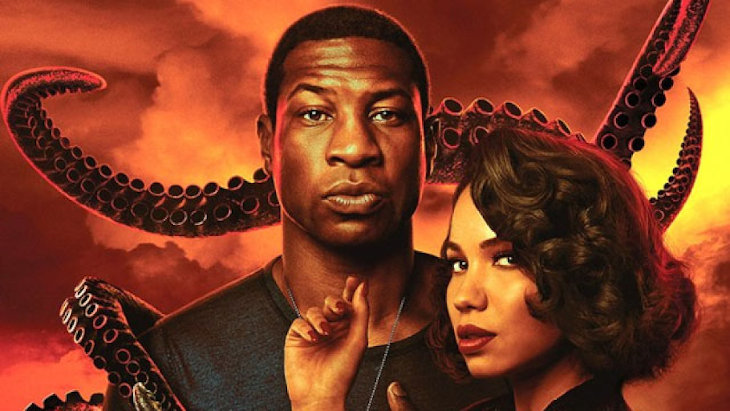 The Umbrella Academy depicts a family of superheroes who must come together to protect the world. Among the evil actors they battle is a "lizard person” who disguises himself as a human, and an organizer of evil forces who speaks Yiddish, among other languages. This seems to echo the bizarre anti-Jewish conspiracy theories of former soccer player and BBC sportscaster David Icke, who has written books claiming that many prominent Jews are actually secret “lizard people” seeking to world domination.

Despite the patent absurdity of this claim, Icke and his works have received a warm reception. Alice Walker, the famous author who is also a noted anti-Semite, told The New York Times in 2018 that she keeps a copy of one of Icke’s books by her bed to read at night. On August 29, 2020, Icke was cheered by thousands of anti-lockdown protestors when he addressed a rally in London criticizing public health precautions. “The world is controlled by a few tiny people (who) impose their agenda on billions of people,” he told the over 10,000 strong crowd in a seeming nod to anti-Jewish slurs that falsely claim Jews somehow control the world and force others to do their bidding.

The Board of Deputies of British Jews wrote a letter protesting this anti-Jewish slant in the program, saying “Whether intentional or not, this makes for very uncomfortable viewing. Netflix should take action to remove the racism from this scene.”

Lovecraft Country, HBO’s hit new series, has only aired a few episodes, but it’s already gained over a million viewers – and raised troubling questions about its recent use of anti-Jewish tropes.

The show is based on Matt Ruff’s bestselling 2016 novel about a group of Black Americans travelling through the US during the Jim Crow era. In addition to the monstrous racism the characters encounter from prejudiced White Americans, they also have to contend with actual monsters as the book and show veer into horror. It’s a clever conceit, stressing racism’s gruesomeness and horrifying nature. “With its atmospheric blend of supernatural and societal menaces, Lovecraft Country (uses) horror filmmaking as a form of social commentary on American race relations,” noted Salamishah Tillet in a recent New York times review of the show.

Lovecraft Country producers include J.J. Abrams, Misha Green and Jordan Peele. It’s a high-quality, well-acted, suspenseful show and that makes its recent veering into anti-Jewish stereotypes all the more startling.

(Spoiler Alert below: the next paragraph divulges details of Lovecraft Country’s third episode.)

On August 30, the series’ third episode aired. Titled “Holy Ghost,” it showed the character Leti buying a dilapidated old Victorian Mansion in a mostly White Chicago neighborhood. As she begins to fill the house with Black tenants, her White neighbors turn menacing – eventually turning on her and burning a cross on her front lawn. This horror outside is matched by horror inside, as restless spirits threaten the tenants. Eventually, Leti finds out the root cause of these angry ghosts: a scientist with the very Jewish sounding name Hiram Epstein apparently kidnapped eight Black people years before. He conducted gruesome experiments on them, murdered them, and buried their bodies underneath the house. It’s their souls that cause some of the mayhem in the hour-long episode.

In a show without any other Jewish characters, the introduction of such a Jewish-sounding name, particularly one who is so bloodthirsty and destructive, is startling.

Philissa Cramer, Editor-in-Chief of the Jewish Telegraphic Agency, is a fan of the show, and wrote about her reaction watching the episode: “I was surprised Sunday night to hear a typically Jewish name applied to a character whose only appearance was as a ghost – and whose story instantly evoked one of history’s most durable antisemitic stereotypes.”

That stereotype is the accusation that Jews somehow are driven to kill non-Jews: the “blood libel” that’s plagued Europe and the Middle East for centuries. The first blood libel occurred in England in the 1100, when a boy named William was found dead in the woods outside of the town of Norwich. A local monk accused the local Jewish community of torturing and murdering him. Despite widespread anti-Semitism at the time, local authorities could find no proof that any Jews had harmed the boy. Nevertheless, the baseless lie that Jews had murdered the child gained believers. William was even made a Saint and remains venerated as St. William of Norwich to this day.

Jews were accused of needing the blood of non-Jews in order to bake matzah, or to make the hamentaschen. Sometimes Jews were falsely accused of drinking blood.

Blood libel accusations spread throughout Europe and even into the Middle East. Between 1100s and 1500s, historians have documented about a hundred blood libel trials, most of which resulted in massacres of Jewish communities. In 1840 a major pogrom against Jews occurred in the Syrian city of Damascus after local Jews were charged with kidnapping and murdering a Christian priest. Thirteen Jewish leaders were tortured to extract confessions (four died), and 63 Jewish children were seized from their parents in an attempt to make their Jewish mothers and fathers confess.

In 1928 the blood libel even came to America. When a four-year-old girl disappeared from home in the upstate town of Massena, New York, local townspeople began claiming that local Jews had murdered her. The police chief ordered a local rabbi, Berel Brennglas, to come to central police headquarters and asked him whether it was true that Jews killed Christian children in order to use their blood in Jewish religious rituals. Outside, a threatening crowd gathered, convinced that local Jews were to blame. It was only later when the little girl was found safe and well that a potential pogrom prevented.

In 2016, Russian-backed RT television quoted Palestinian officials who falsely claimed and Israeli “rabbi” had said it was permissible for Jews to poison wells that Arab people use and kill them. The 2003 Syrian hit tv show Ash Shatat portrayed Jews engaging in murder so they could use blood in religious rituals. Similar allegations have been featured in other popular shows across the Muslim world, including the 2002 Egyptian blockbuster miniseries Horseman without a Horse, which aired across the Middle East, and portrayed Jews secretly plotting to rule the world and oppress non-Jews.

After an earthquake struck Haiti on January 12, 2010, Israel sent one of the largest delegations of aid, and established a fully functioning hospital on the island. With the anti-Jewish suspicions that centuries of baseless blood libel accusations have spawned, it seemed natural when a member of Britain’s House of Lords reacted to Israel’s aid not with admiration, but with suspicion and hatred instead. Baroness Jenny Tongue, the Liberal Democrats’ Health Spokesperson in the chamber, demanded that Israel set up a committee to answer accusations (that only she was making) that Israeli doctors were working in Haiti only so they could harvest the organs of local residents.

Repeating these horrible slurs only serves to heighten dislike, suspicion and hatred of Jews. It has no place on American television.

The ancient blood libel contributes to a pervasive feeling that Jews are somehow untrustworthy, dangerous and evil. So do untrue slurs that Jews somehow seek to control others. Those negative feelings towards Jews have real consequences. A 2019 poll found that large numbers of Europeans believe Jews exercise a malevolent power over non-Jews, much like the “lizard people” in The Umbrella Academy. In the recent ADL study 71% of Ukrainians, 71% of Hungarians, 56% of Poles and 50% of Russians agreed with the statement that Jews “have too much power” in the financial and business world.

It’s likely that the writers of Lovecraft Country and The Umbrella Academy never thought of their recent episodes as anti-Jewish. But giving a character who secretly lures, tortures and kills non-Jews an unmistakable Jewish-sounding name has a terrible history. Creating characters who echo extreme anti-Jewish conspiracy theories perpetuates the false belief that Jews are alien, different, strange, and somehow seek to control or dominate others.

Repeating these horrible slurs only serves to heighten dislike, suspicion and hatred of Jews. It has no place on American television, or any place else.

Sidney Poitier and the Jewish Waiter who Taught Him How to Read
What Does Kosher Mean Literally?
Live Abortion Panel
Morality and Abortion: Three Views
Comments
MOST POPULAR IN Art Smarts
Our privacy policy