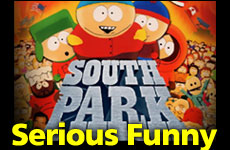 On April 14, Comedy Central’s “South Park” celebrated its 200th episode of “take no prisoners” animated comedy by dressing up the Prophet Mohammed in a bear suit. (It’s a long story…)

When the South Park creators say everyone is fair game for ridicule, they mean it.

Unlike most of their show business rivals, when South Park creators Trey Parker and Matt Stone say everyone is fair game for ridicule, they mean it. The religiously themed episode targeted Moses, Jesus, Mormon patriarch Joseph Smith and the Buddha.

Then, parodying the disputed Islamic dictum that forbids the depiction of its holiest prophet, Stone and Parker showed Muhammad dressed in a bear costume. (Perhaps this was a nod to the British teacher working abroad who was sentenced to death for naming the classroom teddy bear “Muhammad” — at the behest of her (Muslim) students.

The next day, a seemingly tiny group with the grandiose name “Revolution Muslim” (and led by a young convert from Judaism, no less) announced on its web site:

“We have to warn Matt and Trey that what they are doing is stupid, and they will probably wind up like Theo van Gogh for airing this show. This is not a threat, but a warning of the reality of what will likely happen to them.”

(Theo van Gogh is the iconoclastic Dutch filmmaker who was murdered on the streets of Amsterdam in broad daylight by an Islamic militant, after making a film depicting the abuse of women in Muslim countries.)

Stone and Parker then told the media that Comedy Central had censored the show. That episode was supposed to end with a speech challenging “intimidation and fear,” but the speech was cut, presumably on account of fear and intimidation.

I’m not inclined to defend South Park. On the whole, the show is tasteless, offensive and not something I would ever allow my children to watch.

However, I do defend Parker and Stone’s right to free speech, even if — especially if — I don’t like what they are saying. (Without that coda, as Voltaire recognized, the very principle has no meaning.)

In my latest book Shtick Shift, I devote an entire chapter to South Park’s treatment of stereotypes revolving around Jews and affluence. I may not like the program, but millions do and it is one of the most important satirical shows of our time.

The controversy generated by that 200th episode has taken on a life of its own. One cartoonist impetuously declared May 20 “Everybody Draw Mohammed” Day, then chickened out, appearing on her website wearing a peace sign t-shirt and begging fellow artists to “Draw Al Gore” instead.

Too late. “Everybody Draw Mohammed” Day is scheduled to take place without her. The event’s Facebook group has over 13,000 members.

Comedy Central superstar Jon Stewart of the Daily Show defended South Park and mocked his cowardly employers on the air — but continued to work for them, naturally. (That’s what’s known as “speaking Truth to Power” — while cashing Power’s check…)

Another Daily Show performer (and self-described “liberal Muslim”), Aasif Mandvi, said he would find any cartoon depiction of Mohammed personally upsetting. But, he added, “Here’s what’s more upsetting. Someone, in the name of a faith that I believe in, threatening another person for doing it.”

Oddly enough, this more pertinent, not to say more courageous, comment went largely unreported by the same media mavens who fell over each other to praise Stewart’s “bravery.”

Artists of all stripes have always been expected to be courageous, and even outrageous. As the rabbi of America’s most prestigious art school, Pratt Institute, I support and encourage students to express themselves through the arts.

Because let’s face it: there is something very Jewish about grappling with the discrepancies of power, which is exactly what satire is all about.

Jews have a history of wrestling with higher authorities. Ever since Jacob wrestled with the angel, battling with earthly (and even heavenly) power has been at the core of Jewish identity. Unlike many sacred books, the Talmud is more an anthology of arguments than a handbook of answers, in which sages fearlessly but reverently dissect every aspect of Jewish law, belief, philosophy and tradition.

Like Islam, Jewish tradition also prohibits the making of graven images. (That’s the Second Commandment, so it’s pretty important.) This explains why synagogues have no pictures of any kind on display.

However, Judaism does not and must not threaten and intimidate those who create images we might find disturbing. Given our contributions to, and reverence for, literature and the arts throughout the ages, and our own rich tradition of satire, that would be a very “un-Jewish” thing to do.

For all those reasons, Jewish artists in every discipline should feel a special obligation to defend creative people of every faith, and no faith, whose work challenges others. In a world where even poorly drawn cartoons can inspire murder and mayhem, we may need these artists to return the favor for us one day.

Won’t You Be My Neighbor? Mr. Rogers, 50 Years Later

When Bob Saget Wrote Me a Letter and Rocked My World
In the Shadow of David and Goliath
Where Do the Laws of Nature Come From?
Saadiah Gaon, Rashi and Maimonides: How Three Rabbis Revolutionized Judaism
Comments