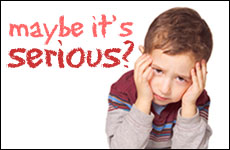 Dealing with childhood fears of illness and death.

All preschool children eventually discover the meaning of illness and death. And when they do, they often become alarmed, anxious and temporarily preoccupied with somatic concerns.

In most cases, these childhood anxieties pass quickly, as long as parents do not overreact.

In most cases, these childhood anxieties pass quickly, as long as parents do not overreact. If parents become unduly alarmed, however, and attempt to "cure" their child's illogical fear by shouting at or demeaning the child for his "foolishness," it will be most counterproductive, insuring that the child will become even more nervous and insecure than before.

What is called for is a gentle, calm approach that allows the child to grow out of his fear at his own pace. Comments, such as, "I understand you are frightened, but I know that such illnesses do not occur in children your age," are often all the reassurance that is needed.

Some children, however, are not so easily comforted. These are children who will return from a visit to the pediatrician and worry that the examination may not have been complete. "Maybe the doctor missed something?" Or, "Perhaps an illness developed only since my last checkup?" Or, "Just what does that funny tickle in my throat really mean?"

These are the same children who tend to brood about the future. "How will we manage if Daddy loses his job like Leah's father?" "What will we do if the car breaks down while we're on the highway?" And, "How do they know if someone is really dead before they put him in the ground at the cemetery?"

What causes children to be so fearful of illness? Why are some children more worried about their health than other kids their age? And what can parents do to allay their children's irrational fears?

(1) Family illness. A serious illness in the family can elevate a child's level of anxiety regarding his own state of health. But more than the illness itself, how the illness is dealt with in the family plays an even greater role. If the parents are secretive about the illness, for example, that will practically guarantee that at least one child at home will develop obsessive preoccupations with somatic concerns.

Take Ronny, for example. His mother suffers from multiple sclerosis. As a result of her progressive and debilitating illness, she has difficulty walking and is often weak and needs to go to bed early. In order not to frighten their children, Ronny's parents told them that Mom fell as a child and chronically injured her leg.

Ronny began worrying about his mother's condition and eventually graduated to nervous concerns about his own health. At first, he complained of frequent headaches during the day. A pediatric neurologist then ruled out any medical problems. While the frequency of the headaches diminished slightly, Ronny also became fearful of not being able to fall asleep at night. Only after he was told the truth about his mother's condition did his own anxieties settle down to more manageable levels.

3) Family conflicts. If, for any reason, there are tensions at home, a child may redirect his anxieties inward, toward himself. In much the same way that a child who is angry at his parents may punch a stuffed animal, a child who is frightened by family tensions may displace his fears onto his own bodily functioning.

Suppose, for example, that Father has an explosive temper; Mother is an alcoholic; or, the parents are teetering on the precipice of divorce. Any child in that home could suddenly develop somatic complaints and anxieties that they never had before.

Consider Raizy, a 6-year-old pre-1A student with long, golden-blonde pigtails. Her parents were well known and well liked in the community for their extensive volunteer work and outgoing, friendly personalities. At home, however, Raizy's parents argued and bickered uncontrollably.

Raizy was terrified that her parents would get divorced even though neither parent used the "D" word at home. As her parents unleashed their wrath at each other in Raizy's presence, she was exposed to the full fury of their mutual hostility.

Just when her parents' conflict became upgraded to a category 5 storm, Raizy "coincidentally" developed stomach aches that prevented her from falling asleep each night. The more often Raizy came out of bed announcing her stomach pains, the more frustrated her parents became. And the more they lost patience with her, the more intensely Raizy experienced her symptoms.

Raizy's condition was diagnosed by her pediatrician as constipation. Later that was revised to a milk allergy. When treatment for those disorders ruled out the diagnoses, the pediatrician herself became impatient and declared that Raizy was "just looking for attention."

Raizy's condition dragged on for months and only abated "coincidentally" following her parents entering marital counseling that led to a marked reduction in the level of hostility openly displayed at home.

WHAT PARENTS CAN DO

(1) Seek medical consultation. No somatic complaint should be automatically dismissed without first checking to see if there is a medical basis for the symptom. Only after your child has been thoroughly checked by a pediatrician and physical ailments have been ruled out, should you suspect psychological factors such as excessive anxiety.

(2) Identify and eliminate environmental stresses. Sit down with your child and try to figure out together what else may be bothering him besides his dizziness or dry mouth.

Do not expect your child to immediately point to the underlying concern or fear which may be generating his psychosomatic complaints. You may need to go fishing by taking some well-thought out, educated guesses.

"Your stomach cramps started around the time that Grampa died. Do you think you may have become more worried about illness because he just passed away?"

"I know that Mommy and I have been arguing quite a bit lately. How does it make you feel and what do you think about when you hear us shouting at each other?"

"You first mentioned that you sometimes have a hard time breathing the week after we got stuck in the elevator at the department store. I know it was a scary experience for all of us. Do you still think about that and does it still frighten you?"

(3) If all else fails and you emerge empty handed from your fishing expedition, be sure to adopt a firmly optimistic attitude of supportive encouragement. Through your tone of voice, body language and speech, communicate to your child that you are not alarmed by his anxieties.

At the same time, do not give him the impression that you are totally unconcerned or dismissive. Rather, try to find a proper balance of concern for his distress coupled with confidence that everything will work out just fine. And you can teach your child to cope more effectively with his fears by modeling for him the coping skills you take for granted.

When you soothe his anxieties with gentle words of support and encouragement, he will learn how to speak to himself in the same fashion, which will go a long way toward building up his own arsenal of techniques to manage his anxieties.

For example, you can say things like, "I remember you felt that pain before and it eventually cleared up by itself. I think that will happen again this time"; or, "Dr. Schwartz was able to tell when you had a strep throat so I'm sure he would have been able to tell if this was anything serious"; or, "I know it is scary when a classmate goes into the hospital to have an operation. But that doesn't mean any other child in the class is going to get sick."

You cannot expect to turn a fearful, anxiety-ridden child into a fearless daredevil, oozing confidence. But the way you respond to his fears can make the difference between a child who is crippled by his anxieties and one who is only occasionally disturbed by them.

The Gift of Failure

Six Ways to Be Patient with Our Children

Hit and Run
In the Shadow of David and Goliath
Where Do the Laws of Nature Come From?
Saadiah Gaon, Rashi and Maimonides: How Three Rabbis Revolutionized Judaism
Comments