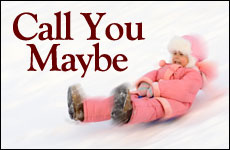 When someone else’s child is doing something dangerous, should you get involved?

I am not someone who usually will call another parent.

I mostly take a deep breath, say a prayer, and mind my own business when I see kids bouncing around unbuckled in a car, or crossing streets alone when they seem too little to be doing so, or climbing trees way too high, or riding a bike without a helmet, etc.

A few years ago my best friend from high school called me sobbing. The 6-year-old daughter of her college roommate had just been killed in a freak accident.

It was a silvery December morning in a quiet residential neighborhood. A blanket of light fresh snow had fallen silently overnight. The mother (my friend’s old roommate) and her two girls, ages six and three, happily put on their snow pants and gloves, pulled out the sleds from the garage and got an early start on the day. Instead of going to the big hill a short car ride away, the mother decided to stay at the house and let the girls sled down their sloped driveway.

It was a quiet street with hardly any traffic at all.

Other kids in the neighborhood did it all the time and there were lots of cars parked along the street to protect against a hasty slip too far out. Besides, the driveway flattened out at the bottom and you could usually stop on your own before going all the way into the street. And it's a quiet street with hardly any traffic at all. And it was early in the morning. And they were going to be careful.

Even so, because the driveway emptied onto the street, the mother made a rule that the girls could only sled down the driveway when Mommy was standing in the street at the end of the driveway. This was a two-fold safety measure: One, Mommy was there to help the girls stop if they could not stop on their own. And two, if a car was coming, Mommy could tell the girls to wait.

It was so much fun.

But then the 3-year-old had to use the bathroom. So Mommy told the 6-year-old not to sled, to just stay put for a few minutes until she came back outside. So she waited. Except that to her 6-year-old mind, Mommy was taking a long time. And besides, it seemed okay. She had seen the other kids doing it.

So she got on her sled.

The driver was a kind, careful, totally sober 61-year-old grandfather. He was just going out to get a newspaper. And he was only going 20 mph. And there were cars parked along the side of the street. And it was so early. And so quiet. Yet even if there had been lots of kids playing outside, would he have thought that one might slide out in front of him?

This week, when I drove past a house in my neighborhood with a sloping front lawn, and saw a bunch of bundled-up little snow-saucer riders sledding down the small hill toward the street – with no grownup in sight – I debated (not for the first time) whether to stick my nose in or not.

It’s not my job to weigh in with unsolicited parenting advice.

It is not my job to weigh in with unsolicited advice on another parent's safety standards, choices or decisions about fun and risk (obvious abuse notwithstanding). It is not my right to impose my own fears on others. And besides, what happened to that little girl was an accident amidst safety precautions. And besides, that confluence of freak factors would never happen again, right?

I was not feeling highhanded or judgmental. I was just remembering the rigors of grief and the shattering of lives. I was remembering the feeling of helplessness in the face of tragedy.

I also considered what a spoil sport I can sometimes be.

And on that calm, glorious, snow-covered morning, I said a prayer, and made the call.

Melissa Groman, LCSW, is a therapist specializing in individual and marital counseling, eating disorders, depression, addictions, and healing emotional pain. She is the author of "Six Simple Ways to Make Your Woman Happy and Create a Great Life."

4 Tips on Teaching Kids to Behave

The Gift of ADHD

A Self Fulfilling Prophecy - Part 2 - Building Positive Self Esteem In Children
Va’etchanan 5782: A for Effort
Can You Show Me This "God?"
How to Become Immortal
Comments
MOST POPULAR IN Family
Our privacy policy
Aish.com Is Looking for Great Writers