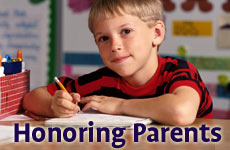 In Judaism, every day is Mother's Day and Father's Day.

It's one of the Ten Commandments1 – right up there with belief in God and "don't murder." The Talmud regards it as one of the most difficult mitzvot to perform properly.2 What's so special about the mitzvah to honor parents?

Many people think that honoring parents is some kind of payback for all those years of changing diapers and paying for college. Actually, this mitzvah was given to the generation who wandered 40 years in the desert, where God automatically provided everyone's needs. The parents didn't feed their children; they had the manna to eat. The parents didn't provide clothing; the clothes grew with them and never needed washing.3 Nevertheless, it was precisely this generation who stood at Mount Sinai and heard God utter, "Honor your father and mother."

We learn from here an amazing thing: The mitzvah of honoring parents does not depend on what your parents did for you, or even whether they were good parents. Rather, we honor parents simply because they gave us the gift of life.4

Imagine you were drowning and a stranger came along and saved your life. You would be forever indebted to that person. All the more so we should be grateful to our parents who gave us life.

The Talmud teaches that there are three partners in the formation of a person: father, mother, and the Almighty.5 If we have gratitude to our parents for the gift of life, how much more so we'll be grateful to God for creating and sustaining the entire world – for giving us air to breathe, flowers to smell, and soil to walk on.

By honoring those who brought us into existence, we learn not to take things for granted and develop an appreciation for the kindness of others.6

In addition, in the case of caring for our parents, we fulfill two other Torah obligations at the same time: (a) "Love your fellow as yourself,"7 and (b) Emulating G-d's ways, as G-d cares for the needs of all mankind.8

With that introduction, let's get to the practical "how to" of honoring parents.

There are actually two parts to this mitzvah

The basic way to honor parents is to care for their needs. Specifically, this includes:

An occasional exception to this is the case of a married daughter. Generally speaking, her obligations towards her husband take precedence over those towards her parents.12a In cases of conflict, an appropriate rabbinical authority should be consulted.

When possible, it is preferable for a child to live near the parents,13 to better care for their needs.14 There are really no limits to this; the Talmud tells how the great Rabbi Tarfon would bend down to serve as a step-stool for his mother to climb in and out of bed.15

Parents should be visited and phoned as frequently as possible, depending on the parent's needs and child's schedule.16 In general, be sensitive to the fact that parents naturally worry about their children. Try to send a quick email or phone message every day or two. Especially if you are traveling, call to let them know that you arrived safely.17

If the parent is old and infirm, the child is responsible to arrange for his care, and must pay for it if the parent cannot afford to do so.18

Of course, you should never let your parents feel that they are a burden, or that you are assisting only out of obligation.19

As a reward for honoring parents, the Torah promises long life.20 One possible explanation is that taking care of parents – especially when they are elderly – can be very time-consuming. So God "compensates," so to speak, by adding extra years to your own life.21

As an added bonus, when your children will see you honoring your parents, they will learn this importance of this mitzvah. That's the payback when it comes your turn to be on the receiving end.22

How to Honor Parents

Honoring parents goes beyond just "doing favors." An element of this mitzvah is to admire your parents and consider them to be eminent people.23 For example, if you hear someone speak negatively about your parents, you are required to speak up and defend their honor.24

Even more, you should make a specific effort to love your parents, to the point of developing hero worship!25 How is this achieved? The definition of love is "the pleasure of identifying people with their virtues." You should try to discover the qualities that make your parents extraordinary, among the greatest people alive.26 The more of your parents' virtues you're aware, the more you'll appreciate, love and honor them.27 (However, even if you don't develop this "love," the obligation remains to honor them.28)

The Talmud suggests other ways to increase admiration:

In general, a child should be eager to fulfill his parents' wishes. There are some limits, however:

There are three specific areas that, due to their intense personal nature, a person is not required to respect his parents' wishes:

Besides the mitzvah to honor parents, there is a second aspect of awe and reverence. The particulars of how to fulfill this may depend on the society in which you live. But the basic principle is that there must be clear lines: "I am the parent and you are the child. We are not equals."

This is typically achieved by observing the following guidelines: 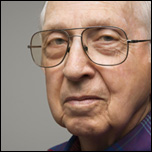 Sometimes, a parent might feel uncomfortable with the rules of honoring parents, especially when teaching (and enforcing!) them to younger children. But it's important to keep in mind that more than for the sake of the parents' honor, all this is to instill good character traits in the child, to give him a framework for future relationships – with friends and colleagues, with his own children, and with God.

The obligation to honor and respect parents applies even after they have passed away.50 When referring to a parent who has passed away, you should add an expression of honor, for example:

Once you are married and have children of your own, naming a child after your deceased relatives – parents, grandparents and other relatives – is considered an honor for your parents.53 The Sefardic custom is to also name after living relatives.54

Other ways to posthumously honor a parent include:

In general, raising your level of Jewish commitment (i.e. Torah study and mitzvot) is a great source of merit for your parents, even after they pass away.60

There are a number of "secondary" relatives who a child is also obligated to honor: 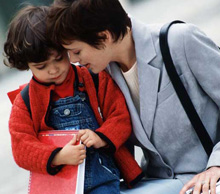 In a case of conflicting demands, honoring an actual parent takes precedence.66

Also, the obligation to honor these other relatives does not include the aspects of "awe and reverence" (e.g. calling by first name, sitting in their chair, etc.).67

Finally, every parent has a deep desire to see their family at peace with one another. Therefore children must be very sensitive to the pain it can cause parents if they are quarrelling with siblings and other relatives.68

The reality is, of course, that parents are not perfect. And some parents are objectively problematic. Yet no matter how difficult a parent's behavior, a child is still obligated to show honor and respect.69 This applies even if a biological parent has abandoned his child. And it applies even if the parent is rude, unpleasant, and an embarrassment.70 The Talmud71 tells the story of a mother who spit in her son's face – while the son kept his composure and continued to accord her honor.

At the same time, while honoring your parents is a tremendous mitzvah, you also need to be responsible for your own welfare. One is not required to endanger his emotional or physical health for a parent. Therefore, if a child cannot cope with the parent's behavior, he is permitted to keep his distance.72

The obligation of the mitzvah, however, still applies. For instance it would still be forbidden to use the parent's first name or to contradict him publicly. And it is always appropriate for a child to feel a deep appreciation to a parent for giving him the gift of life.

Of course, all this does not in any way absolve an abusive parent. On the contrary, a parent should not be overly strict with his own honor, and may choose to forgo that honor when appropriate.73

Children are precious gems that are deposited with parents for polishing and finishing. Parents who fail to build a warm and loving relationship with their children will pay a heavy price for this negligence.

As we mentioned earlier, honoring parents serves as a springboard for the gratitude we should feel toward God. But this issue goes much deeper. The commentators74 point out that the first five of the Ten Commandments (i.e. the first tablet) contains mitzvot between man and God: don't serve idols, don't take God's name in vain, etc., whereas the second tablet contains mitzvot between man and man: don't murder, don't steal, etc.

Where is the mitzvah to honor one's parents? In the first set of five. Because from the moment of infancy and beyond, the way a parent acts toward a child forms in the child's consciousness a paradigm for how God relates to us.75 The primary role of a parent, therefore, is to communicate to the child: You are loved and cherished. You are unique and special, creative and talented. You are cared for and protected. 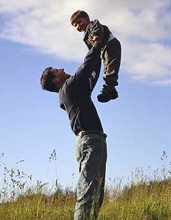 The most important message a parent can communicate is: "You are not alone in this world." This idea is the foundation of our relationship with God. A person may find themselves in a terrible situation – illness, poverty, war – but they can still know that God is with them.76

If a parent is untrustworthy and uncaring, unusually harsh or permissive, it subconsciously sets into the child's mind that God must somehow be the same. This is an emotional handicap that can be difficult to overcome later in life.

One final thought: As society progresses, there may be a tendency for children to feel "ahead" of their parents. Sure, kids today are more technologically savvy, and are up on the latest music and fashions. But in Jewish consciousness, parents are to be respected because they are the source of our tradition. In other words, parents not only gave us life in this world, but are the link that connects us to our eternal Jewish heritage.77

Click the play buttons on the right to listen to four short audio segments on "Honoring Your Parents" by Rabbi Yitzchak Berkovits:

(This entire audio class is available at aishaudio.com)

Jewish Approach to Finding a Spouse

What is a Mezuzah?
What Does Kosher Mean Literally?
Live Abortion Panel
Morality and Abortion: Three Views
Comments
MOST POPULAR IN Daily Living
Our privacy policy