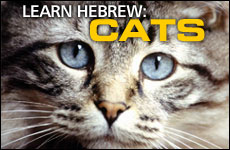 The most popular pet in the world.

The master of the house – and the alley – is the cat (

chatul). Cats are the most popular pet in the world (

chayat machmad). Traditionally, historians have thought that ancient Egypt was the site of cat domestication, due to the clear depictions of house cats in Egyptian paintings about 3,600 years old.

Unlike many animals, the cat's language seems to be universal and all cats have the same meow (

). In Israel you can see cats everywhere in every street, on fences, in garbage cans, or next to any possible food supply. Legend is that in the 1930s, the British brought cats to the Holy Land to control the rat population; that was solved and now Israel’s cities have a preponderance of wild cats. 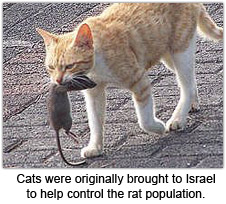 Many cultures have negative superstitions about cats. An example would be the belief that a black cat "crossing your path" leads to bad luck. Believing in this would be a violation of the Torah commandment not to ascribe power to omens (Leviticus 19:26).

Cats are mentioned fondly in the Talmud. Our Sages of Blessed Memory (

) refer to cats as an example of modesty, for the way they cover their droppings:

Translation: If the Torah wasn't given, we would have learned modesty from the cat. 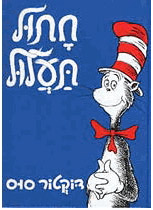 Hebrew has a special way of forming “diminutives”: the root letters are doubled. For example: 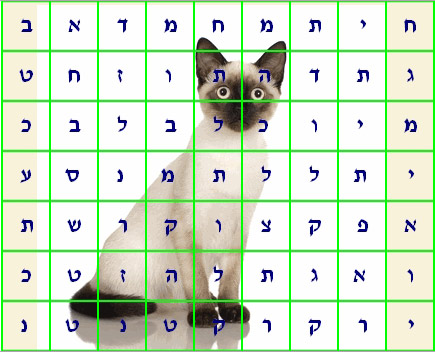