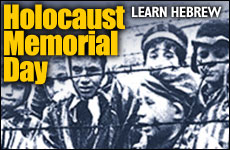 One morning each year, a siren sounds throughout the Land of Israel, and daily life stops. Cars halt in the middle of the highway, factories go silent, and students cease to study. People utter prayers or personal thoughts memorializing the 6 million (שִׁשָּׁה מִילְיוֹן) Jews murdered at the hands of the Nazis. It is a two-minute national commemoration called Holocaust and Heroism Remembrance Day (Yom HaZikaron laShoah velaGvura - יוֹם הַשּוֹאָה והגבורה).

On this day, places of entertainment are closed by law, TV stations air Holocaust documentaries, and low-key songs are played on the radio. Flags are flown at half-mast and a memorial ceremony is held at Yad VaShem (יד ושם), the Holocaust Memorial, in the presence of the Israeli Prime Minister, President, survivors and their families. 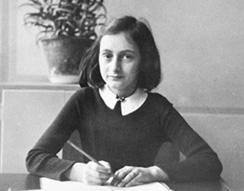 One girl symbolizes how the Nazi persecution of the Jews touched the life of everybody, large and small. Anne Frank was born in 1929 in Frankfurt, Germany. When the Nazis gained control over Germany, the family feared of the unknown events and fled to Amsterdam. Anne's father opened there a factory and Anne nurtured her aspiration to become an author.

In May 1940 Germany invaded the Netherlands and began to persecute Jews with discriminatory laws. Anne’s father had to sell his company to non-Jews.

For her 13th birthday, Anne received a book she had seen in a shop window. Although it was an autograph book, bound with red-and-white checkered cloth and with a small lock on the front, she decided to use it as a diary (יומן) and began writing in it almost immediately. While many of her early entries relate the mundane aspects of her life, she also discusses some of the changes that had taken place in the Netherlands since the German occupation (כיבוש).

In July 1942, Anne's sister, Margot, received a notice ordering her to report to a work camp. This was an alarm for the family and they decided to move into hiding rooms that the father had arranged in advance above and behind his factory's premises. The door to their secret annex was covered by a bookcase to ensure it remained undiscovered.

Four people who were previous employees of Otto Frank (and two of their family members) were the only ones who knew of the hiding place (מחבוא). They were contacts to the outside world, keeping them informed about the war and supplying them with basic needs – in spite of the fact that if they were caught, they could face the death penalty for sheltering Jews. 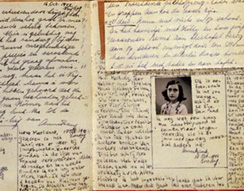 The Frank family hid along with the van Pels family (parents and 16-year-old son) and a Jewish dentist who was a friend of the family. Being forced to share her life so intensively with these people brought Anne to analyze their personalities and behaviors. In her diary, she described the dynamics in the hiding place and the way this unnatural living conditions affected her development. As confidence in her writing grew, and as she began to mature, she wrote of more abstract subjects such as belief in God, and how she defined human nature.

I want to be useful or bring enjoyment to all people, even those I've never met. I want to go on living even after my death! And that's why I'm so grateful to God for having given me this gift, which I can use to develop myself and to express all that's inside me!

When I write I can shake off all my cares. My sorrow disappears, my spirits are revived! But, and that's a big question, will I ever be able to write something great, will I ever become a journalist or a writer?

She continued writing regularly until her last entry of August 1, 1944.

On the morning of August 4, 1944, two years after entering the hiding place, the German SS stormed in following a tip-off from an informer (מלשין) who was never identified. They arrested all eight people.

Anne and her sister were eventually transferred to the Bergen-Belsen concentration camp (מחנה השמדה), where they both died of typhus in March 1945 when Anne was 15 years old. Their mother died of starvation in Auschwitz. The only survivor of the entire group was Otto Frank, Anne's father. After the war he returned to Amsterdam and discovered that one of his contacts had found Anne's diary after they were arrested. He published the diary in 1947 in the original Dutch; it was later translated into numerous languages and became an international best-seller.

Ironically, Anne Frank's wish to go on living even after her death, to become a great writer, was fulfilled under horrific circumstances. Simon Wiesenthal, responsible for tracking down numerous war criminals including the man who arrested Anne Frank, said that her diary “had a bigger impact than the Nuremberg trial. Why? Because people identified with this child. This was the impact of the Holocaust, this was a family like my family..." 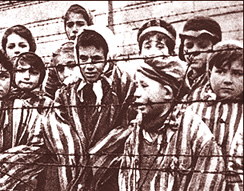 עַמִּיחַי
Amichai is a modern boy’s name, meaning “my people is alive” or “my nation survives.”

נֶחָמָה
Nechama is a girl’s name, meaning “condolence and comfort.”