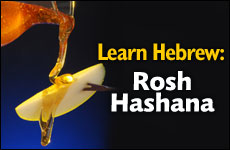 The feeling of renewal is in the air as the Jewish new year is about to begin. It is a time to make resolutions, and to formulate a realistic plan to keep them!

The name "Rosh Hashana" is not mentioned in the Torah, but the names "Day of Remembrance" (

) means the beginning or the head of the year.

Rosh Hashana falls on the first day of Tishrei (

), the first Hebrew month, and lasts for two days. As we wish to enter the New Year clean in our body and soul, we ask for forgiveness (

- slicha) from anyone whom we might have hurt (purposely or unintentionally). We also ask for the absolution of our vows (

- hatarat nedarim) which enables us to enter the new year with a clean slate.

Rosh Hashana is full of customs and prayers. Here are a few: 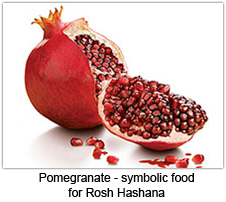 • Apple dipped in honey (- tapu'ach bid'vash) - We dip an apple in honey to symbolize our wish for a sweet year.

- chala agula) - The challah is not braided as usual, but instead baked in a circle -- a wish that the coming year will be complete, and will roll smoothly. We also dip the challah in honey (

. Also, fish is a symbol of abundant increase.

- rimon) - This fruit, which ripens at this season, is full of seeds -- as legend has it, 613 seeds, like the number of mitzvot in the Torah. We eat the pomegranate and ask that our merits increase like the seeds of the pomegranate. 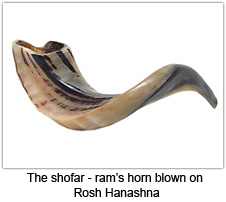 1) Shofar is a ram's horn blown on Rosh Hashana. It is an important mitzvah to hear the shofar in the synagogue each day of Rosh Hashana (except on Shabbat). The Torah calls this Yom Tru'ah (

- a day of Shofar blowing) and Maimonides suggests that it is a "wake-up call" to take stock of what we can do to become better people. The shofar is also mindful of the biblical story of Abraham binding his son Isaac, when a ram was caught in the thicket and sacrificed in Isaac's stead -- an event that occurred on the day of Rosh Hashana. Click here to listen to the different sounds of the Shofar blowing.

2) Tashlich - On Rosh Hashana day, it is a custom to walk to a body of flowing water, preferably one containing live fish, say a special prayer, and symbolically empty our pockets to cast off our sins.

3) Greeting #1 - On Rosh Hashana, we greet each other with "shana tova u'metuka" -- a Good and Sweet Year. Since everything that God does is by definition "good," why do we add the sweetness to the greeting? We add "sweetness" to mean that God's good should be clearly appreciated by us as well.

Translation: May you be inscribed and sealed for a good year!
Transliteration: Leshana tova tika’teivu vete’chatemu

Learn Hebrew: Passover
Don’t Believe in Other Gods Versus God is One
Seeing Without Eyes
Why Shouldn’t We Eat Whatever We Want?
Comments
MOST POPULAR IN Hebrew
Our privacy policy
Aish.com Is Looking for Great Writers