In Search of a Kidney

What are the odds of winning the jackpot… twice?

A few years ago, while studying in Israel, I started getting daily headaches which soon turned into frequent vomiting. I passed it off as food poisoning, allergies or just a bug, and tried not to worry too much about it. I didn’t do any blood tests because I thought it was due to sinus headaches, which I had experienced before. They got increasingly worse over the weeks, along with the vomiting, but it was on and off. I was hiking, bike riding and skateboarding all through the whole ordeal.

My mother came to Israel for a visit and arrived on my birthday, right before Chanukah. My brother, who was also studying in Israel at the time, went to meet her at the airport and explained that I couldn't come because I wasn't feeling well. My mother's concern was heightened a few hours later when she saw me: thin, pale, and 30 pounds lighter due to the constant vomiting.

A friend of my mother's, a doctor in Israel, recommended that we get some blood tests done. After getting the results, the doctors took another blood sample because they couldn't believe the numbers. My blood pressure was 175 over 115 and the blood work showed that my kidneys were functioning at only 10 percent capacity. I was also anemic and malnourished due to the vomiting. Additional blood tests showed that my creatianin (toxicity in the blood) was a shocking 13.6, when it should have been 1 or 1.5.

I was admitted to the hospital and put on dialysis right away. After a few months I was released and flew straight to a dialysis clinic in New York. There I met one of the leading specialists in the world who informed me that my only hope was a kidney transplant.

The average wait for a kidney is seven years, and thousands of people die waiting.

I immediately went to work researching the possibility of a transplant, checking out the various hospital and donors options. The average wait for a kidney is seven years, and thousands of people die each year just waiting. So I put myself on various lists, networked through the Internet… and waited.

And then some good news: A 25-year-old man, whose sole motivation was to save a life, answered an ad in the Jewish Press placed by someone who needed a kidney. After the necessary tests, it was determined that these two people weren't a good enough match, and lo and behold his number got passed along to me!

In the end, the story turned out differently than expected: After going through the standard series of tests, it was discovered that this young man had too much protein in his urine and was actually at risk for kidney problems himself. Though I was disappointed, for him it was fortuitous: He was now aware of the problem and would continue to be monitored closely for any kidney problems.

Blink of an Eye

I continued to seek new avenues of finding a donor, and registered with a website called MatchingDonors.com. This has profiles of those in need of transplants, and -- similar to an online dating service -- matches you up with people who are willing to donate.

From this website I was contacted by Patrick, a kind, religious Christian from Chicago who had adopted nine children. Patrick had originally wanted to donate his kidney to a friend who was in need of a transplant, but he wasn't a compatible donor. So Patrick decided to find a stranger to help. My prayers were answered. I had a donor!!

My next hurdle was to find a hospital to perform the transplant. This process is very frustrating, because most hospitals have an "ethics" policy that permits organ donation only from family members or close friends. (They are trying to ferret out the buying and selling of organs.) So before a donor is allowed to give his organ, besides all the physical tests to determine compatibility, there is also a series of psychological testing. All this added stress and waiting time to something that was so close to working out.

During this time, my mother had attended a class at our synagogue in New Jersey. After the class, many people waited around for the heavy rains to subside. My mother, being friendly and outgoing, started up a conversation with a few young women. My mother mentioned how she wanted to make a "Bracha Party," an event where people say blessings over food out loud, and all the others answer "Amen." Its origins are traced back to King David and is known to have a powerful spiritual impact. My mother thought this would be a good merit for my healing.

One of the young women cheerfully helped my mother organize a Bracha Party.

One of the young women, Judy, quickly pulled out her day planner and said, "That sounds great. What can I do to help?" Without further ado, she helped my mother organize a party that week at our home. Besides the "blessings" on yummy cakes and cookies and all the "amens," we raised money to help needy Israeli families. An added bonus was Rebbetzin Ruchama Shain (author of the classic, "All for the Boss") who attended the party and spoke words of encouragement for my speedy recovery.

That Shabbat during lunch, we heard the phone ring and the answering machine picked up. The message said, "This is the Montifiore Kidney Transplant Center, and you, Frederick Betesh, have just won the lottery. Congratulations! We have a one-out-of-10 million perfect matching kidney for you. Please call us back as soon as possible."

As you can imagine, our hearts dropped, and even though it was Shabbat, this was a matter of life and death, so we called back right away. The hospital told us that a 24-year-old man from Texas had died in a drowning accident and tests showed that he was a perfect match for me. They had me come in immediately for testing and the transplant was performed the next morning. It all happened so fast that I didn't have time to be afraid. As it says, "God sends salvation in the blink of an eye."

I was out of the hospital with a new functioning kidney eight days later.

As I recovered from the surgery, I had time to reflect on the many miracles at play here:

Over the months, my mother kept in touch with Judy, the young woman who had helped organize the special "Bracha Party." A few months after my surgery, my mother called Judy and suggested that she go on a blind date with a guy that my mother knew and admired. Judy agreed, but for some reason the guy never called. Judy called my mother back to ask what she should do. 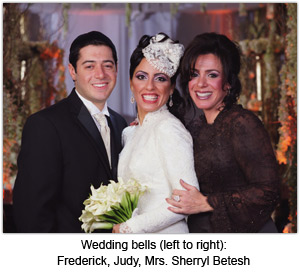 My mother thought for a minute and said, "Actually, I think I have a better idea. Why don’t you get together with my son?"

"If he's as wonderful as you, then I'd love to meet him!"

We met that spring, became engaged at the end of the summer, and were married in December 2007. God has blessed me with unfathomable odds. I won the lottery again!

We're now living in Brooklyn, where I study Torah in the morning and manage an office the rest of the day.

I want to publicly thank God for all the miracles He has done for me. I hope that my story will bring strength to those in need. God loves us all, and though things may sometimes look bleak, there's always a plan, and we are in good hands.

My Husband Dated Me When I Wasn’t Jewish