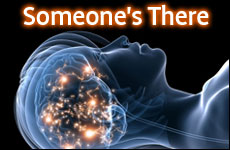 Patients thought to be in a vegetative state were demonstrated to be hearing and thinking.

The rubble doesn’t stir; things are very quiet.  But a faint tapping emerges from somewhere below.  You shout “Can you hear me?” and more tapping ensues.

The scene conjures the aftermath of a natural disaster like January’s earthquake in Haiti and what is happening now in Chile. But it could also stand as a compelling metaphor for the discovery of a human being struggling to be heard though the rubble of a body that is just too hard to move.

A group of European scientists has employed a high-tech means of, in effect, hearing the tapping of a mind trapped in an unresponsive body.  Four patients diagnosed as vegetative and assumed to be unconscious were demonstrated to in fact be aware, despite their inability to move or signal their awareness by moving in any way, even just blinking.

The discovery was the result of the creative use of something called functional magnetic resonance imaging (fMRI), which shows cellular activity across brain regions.   What it demonstrated was that the patients were hearing and thinking.  And that they could communicate.

The researchers’ discovery utilized the fact that when a person is thinking about active movement, cells in one area of the brain become active; when he visualizes navigating a familiar area, a different area shows cellular activity.  The researchers asked the physically unresponsive patients first to imagine swinging a tennis racket and then to imagine moving through the rooms of their houses.  The fMRI scan showed activity in the respective, separate areas of the brain with each thought.

That was impressive in its own right.  But then the researchers posed a series of factual yes-or-no questions to each patient, like whether he had a parent or sibling with a certain name, and instructed the patient to respond “yes” by imagining playing tennis and “no” by imagining walking through his home.   Each patient was instructed to concentrate on the “yes” or “no” thought-activities for a full 30 seconds, well beyond the range of any random brain activity artifact, and they were able to respond accurately.

The results were striking.  The answers provided by the four patients, who were part of a tested group of 54, were all correct, demonstrating that consciousness can reside in a body seemingly severed from the world.   Before fMRI, such an assertion could have been no more than a statement of faith.  Now it is fact.  Left for us to speculate is whether some even more sensitive future technology might one day reveal consciousness even in patients whose brains cannot generate signals detectable by current methods.

No one knows what degree of consciousness persists in a body unable to move.  But now we know that some degree can persist in some such bodies, belonging to people many would previously have thought of as something less than people.

Some still aren’t convinced they are, in fact, still people.  In an editorial in the New England Journal of Medicine, Dr. Allan H. Ropper, a neurologist, warned against, in the New York Times’ words, “equating neural activity [like that seen in the brain scans of the four patients] with [human] identity.”  He asserted that “Physicians and society are not ready for ‘I have brain activation, therefore I am.’  That would seriously put Descartes before the horse.”  Quite the punster, that Dr. Ropper; but the issue is most serious.

What would we think of someone who looks down at the immobile rubble, hears some faint tapping … and just walks away?

Writing in Great Britain’s The Guardian, University of Glasgow Professor of Law and Ethics Sheila McLean doesn’t treat “brain activation” as casually as Dr. Ropper.  On the contrary, she assumes that patients like those who communicated their answers to the European scientists are in fact thinking.  Nonetheless, she asks whether “if recovery truly is impossible, is it compassionate to keep people alive in this condition?”

“Frankly,” she asserts, “the only thing worse than being in a vegetative state must be being in one, but being aware.”

Perhaps.  But then again, perhaps not.  Professor McLean is too quick to discount the value of even such a physically imprisoned life.  Is only our movement meaningful?

Men and women in extremis often find themselves facing the question of life’s meaning.  Not all of us at the end of our life-journeys will experience epiphanies, but all of us have the potential to be so blessed.  And many of us, even if immobile, physically unresponsive and without reasonable hope of recovery, might still engage most important matters – things like forgiveness, repentance, acceptance, commitment, love, God – perhaps the most momentous matters we will ever have considered over the course of our lives.  Are such vital encounters worth less than running and jumping?  Is ending a life of pure contemplation less objectionable that ending one that includes physical activity?

And, as Professor McLean notes, “the consequence of a diagnosis of permanent vegetative state is that it can be lawful to withdraw assisted nutrition and hydration” – resulting, of course, in the patient’s death.

Back to the aftermath of the natural disaster.  What would we think of someone who looks down at the immobile rubble, hears some faint tapping … and just walks away?

Man of Science, Man of Faith

A Lesson of Love

The Song of the Cat
Why My Iranian Mother Didn’t Want Me to Become a Religious Fanatic
The Jewish History of Prague
Why the Sexual Revolution was Bad for Women
Comments
MOST POPULAR IN Current Issues
Our privacy policy
Aish.com Is Looking for Great Writers