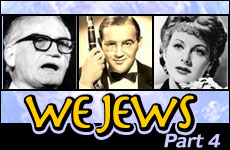 Tales of Jews who are both fascinating and unsung.

We came, we saw, we “mixed in.” Face it. In our wanderings, We Jews have been known to get involved – with other MOTs and the world. And sometimes our helpful interference has changed the course of history – or a day. And sometimes, we “mixed in” with hysterical results. Here are some of my faves.

This is what happens when Jews “mix in.”

The Shlep of the Unknown Jew

Until recent history, career choices for Jews were limited, generally to peddling, money lending, the rag trade and – junk. The biggest hauler, hands down, had to be a Jewish merchant from Emessa. According to chronicler Paulus Diaconis, after one of the seven wonders of the world, the Colossus of Rhodes fell, a Jewish merchant, in around 650 CE, shlepped it as junk on 900 camels! Is this the "emmes" [truth]? There are other legends, but many point to the man from Emessa somewhere in the “messa.”

Isaac and “The Gift”

The concept of the wandering Jew before the State of Israel, has marked Jewish history. However, being “everywhere” also meant Jews were present (often behind the scenes) at some world-class events. Charlemagne appointed a Jew (Isaac) as interpreter and guide for an embassy to be established in Baghdad. Isaac returned in 802, and caused quite a mishegoss when he brought back a gift from the Caliph to the Emperor, never before seen in the West — an elephant!

Eh mate? “Gefilte” across the pond? What’s England without its fish ’n chips? A country doomed to only toad in the hole? A fate they don’t have to suffer thanks to Jewish fishmonger Joseph Malin, who teamed fried fish, a Jewish staple, with “Irish” fried potatoes for “a perfect match!” And so the first fish and chips shop was born in 1860 on Cleveland Street in Cockney country. Despite claims to the contrary, in 1968 the National Federation of Fish Fryers presented a plaque to Malin's of Bow, in honor of his founding role in the chippie business. Today there are 8,600 fish and chips shops in Britain, thanks to a Jew with culinary flair.

The Jewish character, Fagin, in Oliver Twist left some Jews believing Charles Dickens was anti-Semitic. Then came Mrs. Eliza Davis, who, through letters to Dickens starting in 1863, taught him about Jews! The relationship flowered. Not only did Dickens donate to a Jewish cause, but heeded Mrs. Davis’s criticisms and included her suggestions in subsequent works. Mrs. Davis, gratified by his response, sent him Scriptures in Hebrew, reading: “Presented to Charles Dickens, Esq., in grateful recognition of having the noblest quality, that of atoning for an injury as soon as conscious of having inflicted it, by a Jewess.”

Sure, we all know that Joe Lieberman was the first observant Jew who was a candidate for U.S. V. P. But ...... Barry Morris Goldwater, Senator and Presidential candidate, had a Polish pop, zayde, and bubbe. The Goldwassers of Polish descent, were religious and influential Jews! Barry’s zayde, Michel, who married Sarah Nathan in the Great Synagogue of London, became a major macher in Jewish affairs on the western frontier. In California he was a VIP in three Jewish congregations. He also headed the committee that founded Hills of Eternity Cemetery at Colma, California (where lies Wyatt Earp and Jewish wife, Josephine Sarah Marcus), the first Hebrew Benevolent Society and first Zionist meeting in San Francisco in 1898. Barry’s papa, Baron, was Bar Mitzvahed. Barry, though raised as an Episcopalian, sometimes referred to himself as Jewish although according to Jewish law he wasn’t.

New York City’s most famous mayor (1934-45), called “Little Flower,” feisty Fiorello LaGuardia, was born in 1882 to a Jewish mother (Irene Luzzato Coen). He won the love of Jewish New Yorkers for his fierce protection of immigrant garment workers. Ironically, while a Congressman, flyers “flew” calling him a Jew-hater during his re-election bid in 1922. “Fio” challenged his opponent to a debate – in Yiddish! As Mayor, he was such an ardent foe of the Nazi regime, German ambassador protested LaGuardia’s remarks to Secretary of State Hull, who shared them with FDR. The Holocaust was deeply personal for La Guardia. Gemma La Guardia Gluck, his sister, spent eight months in Ravensbr?ck, as did her daughter and grandson. Her husband died in Mauthausen. Despite her brother’s fame, it took a year, before the Gluck family got to New York in 1947, shortly before Fiorello died of cancer. Until her own death in 1962, she lived in a Queens housing project-- constructed by the LaGuardia Administration.

Jewish screen siren Hedy Lamarr, (born Hedwig Kiesler in Vienna, 1913), was known as “The Most Beautiful Woman In Films” such as White Cargo (1942),Tortilla Flat (1942), and Samson and Delilah (1949). But she was also a brilliant inventor. With George Antheil, she invented spread spectrum radio technology, which had military and civilian applications. Hedy, who died in 2000, had beauty and brains, but mazel was another story. Her patent ran out before her system made millions in cellular phone technology.

Many know that Swing King, Benjamin David Goodman (1909-1986) who received music lessons at a local Chicago synagogue, was equally at home playing Mozart. Less known is that the Benny Goodman Quartet broke the color barrier with Gene Krupa on drums, Teddy Wilson on piano, and vibraphonist Lionel Hampton! When "The King of Swing" toured the U.S.S.R (1962), one reporter quipped, "Khrushev would trade three Sputniks for a Russian Benny Goodman!"

“"Mother, you do so much for all of us, is there anything I can do for you?"”

“"Yes,"" she responded, without hesitation. ""I need two parking permits.""

“I was able to arrange for the two permits she needed, to park in front of the AIDS hospice ... where she cared for 14 terminal patients. Even a saint has to park.”

--Mayor Edward I. Koch, reflecting on Mother Teresa’s visit with him, after his stroke in 1987.

State Colin Powell greeted Israel's Prime Minister Yitzhak Shamir in Jerusalem (1993). As a stunned Shamir pulled himself together, Powell continued chatting in Yiddish his “second” language, acquired while growing up in the South Bronx in the fifties, and working at Sickser’s baby equipment store from age 13 until his sophomore year at college. To this day, Colin Powell remembers the stability of Sicksers and the meaning of “oy vey ist mir!”

On July 10, 1997, basketball star Kareem Abdul Jabbar met with former Chief Rabbi Israel Meir Lau in Israel. The connection was deep, as Jabbar’s father was with the U.S. army unit that liberated Buchenwald when Lau was a child imprisoned there! Two African-American soldiers carried him to a nearby village, exclaiming, "Look at the child who you were fighting against! This is the enemy of the Nazis!" Lau gave Jabbar a watch with the Hebrew inscription, "One can earn the world at one time."

Prescription Water
Morality and Abortion: Three Views
There Are No Limits
Adam and Eve Were Vegan
Comments