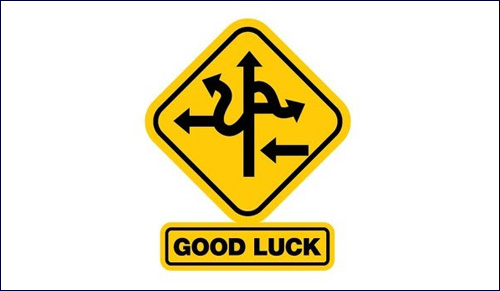 Let’s make traffic signs that we Jews can understand!

I recently took a road test. They gave me sign and shapes: rounds, squares, octagons, broken lines, mammals with x’s. To prepare, a lovely friend made me flash cards. Here’s one she tried to teach me: Even the highway department wished me mazel. 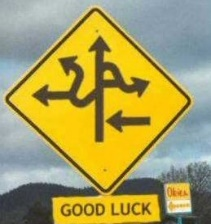 Face it. We Jews aren’t crazy about instructions – especially involving directions – written by governments. So, I feel like it’s high time to take a stand and create normal traffic signs that a Jew like me can understand. Is that so much to ask?! If you agree, by all means let’s start a JTB (Jewish Traffic Blog) and test them – in Miami.

What do you expect when your idiot neighbor tells you to visit Pretzelberg, Pa?! You thought they’d take you on a tour of their kugel factory in those farkakta wagons?

NOTE: THIS IS NOT THE SPEED LIMIT! It’s something else. There’s one every mile. Don’t look or some idiot in the car will suggest you sing a round of “99 miles to Bubbe’s we go, 99 miles to go. If one of those signs just happens to fall, gevalt, another babka could spoil! ONE MORE TIME.”

Oy, you missed the airport. See the arrow! See the space! In that space they put an airport. You can tell because there are planes there. If you get lost again? Look up.

… without cake or a marble rye? Stop at checkpoint “Marvin” for inspection and a tasting. Should you bring a regular rye you’ll be forced to detour.

TO FOOL A JEW

Should you see this sign DO NOT BE FOOLED. There is no “detour.” Anywhere. Should you take a right, you’ll wind up in the Bermuda Triangle and 30 goyim in the Traffic Department will faint from hysteria – especially the yutz who won the office pool. Instead take a left and when you feel it in your kishkes, TURN. If you see signs to Canada you’ve gone too far.

If you have a daughter, a niece, a neighbor who is female and hasn’t found her bashert on JMeet … jump off the road at the little sprouty thingy, speed up to 28 mph and follow till you see a man with a stethoscope running from middle-aged women holding knishes. HURRY. (This sign is only temporary.)

You’ve heard of “I spy with my little eye …?” This means it’s time to play “Halevai” where each Jewish person says one thing that should only happen to them. Listen: “I Sigh with My Halevai … that with your father’s driving we should get to Tante Rose in one piece.”

124 people disappeared without a trace from this very spot since 1953. Be Proactive! Count your passengers. Don’t forget to include you.

For two or more Jews, who when they’re cut off, tail gaited, or receive a rude gesture, have the class, the courtesy to use curses in mama-loshen! For example:

“Shmendrick! A meshugenem zol men oysshraybn un dikh araynshraybn!!” (Idiot! A maniac should be crossed off the register of madmen and you should be inscribed in his place!!)

“May deyn blut vendn tsu alkohol azoy ale di fleas aoyf eyer guf bakumen shiker aun tantsn di mazurka in deyn boykh knepl!!” (May your blood turn to alcohol so all the fleas on your body get drunk and dance the mazurka in your belly button!!)

You’ve been driving a whole half hour without even a sour ball. Force the designated fresser to pull out a few light snacks: an Empire chicken, the leftover brisket, matzo ball soup, knishes (potato and kasha), blintzes (assorted) … and a piece fruit.

Listen, you got directions from your mother-in-law. Left at the statue … right at the monument … go back … go front. What to do? We, at Tel Aviv Traffic Control had a meeting and after much deliberation, weighing of consequences, and consulting with our head Rabbi we decided: We shouldn’t be involved.

Should you, say, pass such a sign you know there’s a: a: hospital; b: clinic; c: rehab center; d: urgent care; e: ER nearby. Even if you haven’t found a new mole on you while driving, stop in! Trust me. You’ll know at least three people you haven’t seen since your Bar Mitzvah. Is this a fun reunion or what? You can even play “Guess the Disease” or “I Had It Worse.”

The Department of Jewish Highways spotted what could be a rain cloud over the Northeast Coast of Issaquena County, Mississippi. Stop at the first Winn Dixie, grab the nearest Gentile and ask him to check the engine on your Emergency Jewflatable Boat. Offer to buy him a family-sized Winn Dixie Lip Lickin Chicken if it takes more than two hours.

Some shmeggege threw a McDonald’s French fry on the highway. Slow DOWN or the above could be you!!

HAVE YOU QUESTIONED YOURSELF TODAY? A REMINDER

Isn’t it time to dig deep and ask yourself why you’re shlepping 130 miles to visit your cousin, who you never liked in the first place, never mind the fact that she didn’t even call when you had that shingles attack on your 16th Birthday? Ask yourself, for example, “Do I need this?” “I need to visit a person who tells everyone my brisket has skid marks meanwhile she can’t dial a telephone?” “Then again, maybe I should be the bigger person?” “On the other hand, would she even appreciate?” “Am I questioning too much?” “Then again, maybe I don’t question enough?” “Oy, did I forget where I’m going?”

JUST DON’T HIT THE THING IN THE MIDDLE

How to Make Chanukah Religious Again
Saadiah Gaon, Rashi and Maimonides: How Three Rabbis Revolutionized Judaism
King Sennacherib and the Siege of Lachish
Three Small and Easy Changes to Add Positivity in Your Home
Comments