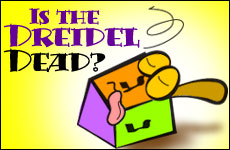 With all of our high tech toys, have we forgotten about the simple ones?

The rate of change on our spinning Earth these days is dizzying. Amazing advances render familiar things obsolete and replace them with new concepts so quickly that Mr. Webster can hardly keep up with mishugena slang suddenly made kosher by common coinage.

And we start indoctrinating our too precocious kindelach into our unnatural world prenatally, as they pose for their ultrasounds. Our kids are born cable and computer ready, having already inherited our high tech, hand me down genes.  Microchips off us old blocks, they soon surpass us in their understanding of our electronic age.

But, alas, a lack--our jaded children no longer value the simpler joys of our youth. I still recall being a baby, playing peekaboo for endless minutes, always amazed that my grandma was still there! Hopscotch, jump rope, dolls, playing pretend could keep me occupied for hours.  But today it takes more and more stimulation to occupy young folks' multi-tasking, macro-minds.

Oy! Even the dreidel has gone millennial!

But now, Sony Playstations, and the royal Wii dominates most playrooms. Guitar Hero keeps our children from their piano lessons, and the Beatles Rock Band game will prevent our bubalas from discovering those fabulous sounds as innocently as we did when we were young.  Traditions are toppling and mutating to the point where we can scarcely remember their original intent. Oy! Even the dreidel has gone millennial. Have moderns now put spin on our top that no one will stop?

The dreidel's gone viral, exploited and celebrated all over the internet. On the bright side, you can now purchase dreidel costumes, pajamas, T-shirts, plush dreidel pillows, figurines, a dreidel shaped menorah, dreidel ties, caps, bowls, charms, cufflinks, keychains, dreidel cradles, and dreidel ladles. But all sorts of complicated new dreidel games, like "Dreidel 6000" (played in an outer space motif with space rocks as gelt) take our attentions away from simpler joys.

There's "Fatal Dreidel" is played with a stainless steel Quark top, made of precision machined parts which can spin for more than 15 minutes, while you run to the kitchen and eat as many latkes as you can before it drops. You score by the letter and your cholesterol count.

This year, the Major League Dreidel Championship, spawned in the Cradle of Dreidelization, New York City's Lower East Side, by Eric Pavony, the official "Knishioner" of the games, will take place there on our second night of Hanukah, Dec. 12. Returning competitors such as Debbie Loves Dreidel, Tasmanian Dreidel, Spinderella, American Dre-idol, and the Gentile Giant (you don't have to be Jewish to love dreideling), will use our old fashioned dreidels in new ways.

Competitors pray, wax their finger tips, and meditate ardently before they begin. Spun on a "Spinagogue"--a new dreidel stadium of decreasing surface sizes as the number of opponents falls from the fray--players fight to the finish.  Winning in that competition is no longer based on the letter that surfaces as the top falls, but on accuracy and skill in accomplishing the longest spin. The record thus far is 17.4 seconds. This year, Jennie Rivlin Roberts, inventor of No Limit Texas Dreidel, the game that crosses traditional dreidel with Texas Hold'em poker, will also join the fray, promoting old fashioned dreideling with card game point systems in which people play for chocolate coins based on the letter that surfaces.

But, my old fashioned hamisha friends, rest assured. You can still buy your favorite shaina maidel a simple dreidel at our site below. You can teach her about nun, gimmel, hay and shin, which form an acronym in Hebrew, meaning "A great miracle happened there," and have her gamble for chocolate gelt. You can light a candle for each of our eight days of celebration and remind her how beautifully simple our traditions of Chanukah can be.

Everything I Need to Know About Parenting, I Learned at Jewish Summer Camp

Cherenk Mining Disaster
The Blue Beyond
Great Place to Live
Is Eating Supposed To Be Spiritual?
Comments
MOST POPULAR IN Jewlarious
Our privacy policy