Degrees of Separation: Ethics of Fathers 4:7 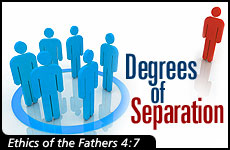 No matter what, commitment to the community must remain our highest priority.

Rabbi Tzaddok used to say: Do not separate yourself from the community; [when serving as a judge] do not act as an advocate; neither make the Torah into a crown for self-glorification nor a spade with which to dig. Similarly did Hillel used to say: He who exploits the crown [of Torah] will fade away. From this you may learn that anyone who derives personal benefit from words of Torah removes his life from the world. Ethics of Fathers 4:7

A policeman once approached two vagrants loitering in front of city hall. "What are you doing here?" the officer demanded from the first man.

"Nothing!" the vagrant replied.

"And what are you doing?" the policeman asked the other.

The second man drew himself up importantly, pointed a thumb at his companion, and declared: "I'm helping him."

We may often find ourselves in situations where it seems clear that no company is preferable to poor company. Elsewhere, the sages warn us against participating in a gathering of cynics who occupy themselves with the disparagement of everyone and everything. Similarly we find the famous Talmudic dictum, Woe to the wicked, woe to his neighbor, applied to the rebellion of Korach and the 250 conspirators who were drawn into his plot and forfeited their lives.

THE FALLACY OF SPIRITUAL SELF-PRESERVATION

In our pursuit of spiritual refinement, we may sometimes conclude that our environment has become a hindrance rather than an asset. Perhaps the members of our synagogue are not conscientious in their Torah observance or their decorum during prayer. Perhaps many of them view services as a social event rather than an opportunity to come together in devotion before the Almighty. Perhaps certain customs have become established that we find personally abrasive or distasteful.

In circumstances such as these, human logic might well dictate that we are better off on our own, where at least we will not suffer the downward pull of complacency and indifference, than to remain in a company of those who do not aspire to true Godliness. Alternatively, we might conclude that we should publicly and pointedly depart from established custom as an example to others, to provide them the opportunity to recognize the error of their ways.

Rabbi Tzaddok comes to warn us against such action. When a community of Jews comes together in the service of the Almighty, it generates unparalleled collective merit, no matter how imperfect its service may be. To withdraw into isolation is to forsake that merit and endanger one's soul; to set oneself apart in the midst of the congregation is to promote discord and dissension, which characterized the senseless hatred that brought about the destruction of the Second Temple.

Become a model of sincerity and commitment that may inspire others to follow.

Ideally, one should remain a part of his community, setting an example not by shouting from the rafters but by becoming a model of sincerity and commitment that may inspire others to follow.

Nonetheless, sometimes it becomes simply impossible to remain in an environment inimical to spiritual growth. In such cases, Rabbi Tzaddok does not preclude the option of uprooting oneself and relocating to a different community of Jews. It is isolation that threatens the individual, and internal divisiveness that threatens the collective. Indeed, even in cases of the most irreconcilable divisions, Jews should limit their differences to ideology and observance, while striving mightily to refrain from emotional diatribe and character assassination.

THE RISKS OF SERVICE

Serving as a model for the community carries its own dangers. The job of a judge is to judge, not to advocate for one side or the other. The judge who believes that the interests of a single party – or even the abstract ideal of Torah justice – are not being served, is warned against what today would be called judicial activism. When a judge allows himself to become biased, no matter how pure or noble his intentions, his manipulation of the court compromises the integrity of he entire judicial system.

Similarly, the one who attains prominence as a Torah scholar must guard himself carefully against the seductions of his own ego. The moment he ceases to serve the Torah and conscripts the Torah into the service of his own aggrandizement, he corrupts the totality of his acquired wisdom and risks eroding the essence of everything he has come to value.

A sage or scholar might easily rationalize his own self-promotion as a means of inspiring or inciting others to higher levels of observance. Rabbi Tzaddok therefore warns against exploiting the crown of Torah: once blurred, the line between serving the Almighty and serving oneself quickly disappears altogether. On the other hand, a scholar may justify using his Torah knowledge to support himself and his family, reasoning that only by receiving remuneration for his teaching and counsel can he continue to engage in Torah study. For such a person Rabbi Tzaddok cautions against using the Torah as a spade – a tool for the mundane purpose of making a living.

It is worth noting that throughout most of Jewish history Torah law prohibited scholars and sages from receiving any payment for positions in Torah education or rabbinics. Only in the 14th century, when the Crusades and the Black Death had wrought catastrophic turmoil upon the Jews of European, did Ashkenazi authorities permit rabbis to accept pay for their services. With so few rabbinic scholars having survived to confront the spiritual chaos that had overtaken the continent, only in this way could Torah communities survive. Eventually, the Sephardic authorities of Spain and North Africa were forced to make similar concessions to the realities of the modern world.

Nevertheless, it is instructive to observe that our translation of the Hebrew word kardum as "spade" is contextual but not quite literal. A more accurate translation would be "axe" or "hatchet." This provides a fascinating twist on Rabbi Tzaddok's teaching. One does not use an axe to dig, for it is the wrong tool for the job. Similarly, to use Torah as a means of earning a livelihood is not only degrading to the Torah but ineffective; it is simply not a wise strategy for achieving the desired goal.

Rabbi Tzaddok concludes his lesson by citing the great sage Hillel: Because the Almighty has bestowed His Torah upon us to earn eternal life in the World to Come, one who seeks to distort the essence of Torah for non-spiritual ends will indeed fade away, measure for measure. By compromising the sanctity of the Torah for personal gain, he will end up sacrificing the spiritual quality of his life in this world, and will tarnish the quality of his reward in the World to Come for all eternity.

The great Shraga Feivel Mendelovitz, who founded the system of Torah day schools in America, never received a formal rabbinic ordination. Nevertheless, he was counted by his peers among the preeminent Torah leaders of his generation and was often called up to speak or receive honors as "Rabbi Mendelovitz." Without exception, he refused to respond, insisting that he was Mister Mendelovitz, not Rabbi Mendelovitz. While eschewing all honor and acclimation, he built up an entire community of Torah scholars and laymen in the spiritual wilderness that was America after the first World War.

No doubt, Rabbi Tzaddok would have approved. 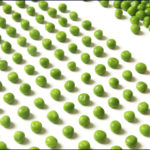 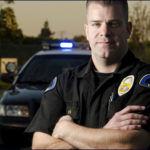 Everyone Else Is Doing It5 min read