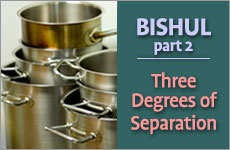 The proximity of the utensil to a heat source determines its status.

At the end of our last lesson, we were in Melissa's kitchen. As we watched her serve a Shabbat meal, we learned about different levels of cooking vessels in halacha. The proximity of the utensil to a heat source determines its status: the closer it is to the fire, the more stringently we consider its ability to cook. As we learn about these types of vessels in detail, we'll use the terms 'first vessel', 'second vessel', and 'third vessel' to emphasize the relationship between the utensil/vessel and the fire.

A first vessel (kli rishon) is something that was (or still is) directly over the fire. This will cook an item most easily, because it is (or was) connected to a heat source. As a result, we cannot place anything "un-cooked" into this kind of vessel. For example, if Melissa tastes her soup (while it's still in the pot) and realizes that it needs salt, she is not allowed to add salt.1

Pouring from a First Vessel 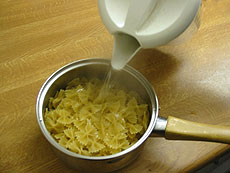 So far, pretty simple. Now let's consider another variation. Recall that Melissa had some Pyrex dishes on her stove. Let's say that one of them contained meat with gravy. She would like to pour some gravy onto her guests' plates (you might not do this normally, but for the sake of this discussion, we'll say she doesn't have a gravy boat). This is called 'pouring from a first vessel' (Hebrew, iruy kli rishon ).2

How should we think about pouring a hot liquid? Does the liquid have the capacity to cook something else it comes in contact with? The halacha says yes, albeit in a limited way.

If first-vessel liquid is poured onto a solid uncooked food, the outermost layer of the food will become cooked. This would be an act of Bishul, and so we don't pour hot liquids onto uncooked food. An example would be pouring hot water from a teakettle into a cup that has tea leaves or a lemon slice.3

By contrast, liquids cannot become 'cooked' in this way, as there is no "outer surface" to retain the heat from the hot liquid. Imagine pouring some drops of hot water into a bathtub filled with cold water. The hot water quickly dissipates in the cold water, and never has a chance to "cook" any of the cold water.4

As its name suggests, a second vessel is a utensil which is one degree removed from a heat source. In general, an act of Bishul (cooking) cannot take place in such a utensil.7 This may seem strange: Why should we view boiling hot soup in a bowl any differently than we view it in the pot? The idea is that, in the process of being transferred, the hot food or liquid loses some of its heat -- because it is no longer heated by the hot walls of the first vessel, and additionally it is cooled by the cold walls of the second vessel.8

Melissa's soup is still on the stove, in the pot it was cooked in. She cannot add anything to the pot, such as pepper, because the soup will "cook" it. Once she transfers the soup to a bowl, is it okay to add these items?

That depends. The halacha recognizes a category called 'easily cooked foods' (Hebrew, kalei ha-bishul). These are things that cook even in moderate heat, and therefore will get cooked even in a second vessel. Common examples are raw egg and finely ground spices.9 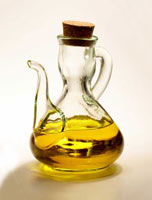 What items are not in the category of "easily cooked"? The Talmud says water, oil, and certain solid (i.e. unground) spices like ginger and cinnamon. Thus in practice, water and oil can be freely added to a second vessel. But beyond that, the custom is to be stringent and to consider all other foods as "easily cooked."10

When it comes to transferring food from a kli sheini, we are moving yet another level cooler. The food will lose more heat as it is poured into another vessel (which would be a third vessel, or kli shelishi). We'll examine this category now.

The innovative Jewish musician Moshe Yess put it best in one of his songs: "There ain't no bishul in a kli shelishi."11 There are actually two opinions about this: the more lenient approach is that, indeed, cooking cannot take place in a third vessel, since the heat has been reduced so much by this point.12

Following this opinion, we may take something that is not cooked and put it in a third vessel that contains something hot.13 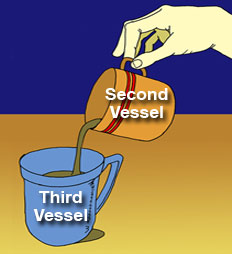 Some people use third vessels to make tea on Shabbat. It works like this: You pour hot water from your urn (first vessel) into a teacup (second vessel) and then pour it into another teacup (third vessel). Once the water is in the last cup, you put the teabag in.14 Although from a physical standpoint, the water is still pretty hot, halachically once it's in the third vessel, it is viewed as being incapable of cooking.15

Other authorities are not comfortable with this approach. They say that since you empirically see the tea cooking in a third vessel, that is regarded as halachic cooking as well.16

According to this opinion, how would one enjoy hot tea on Shabbat? These authorities recommend making what is known as 'tea essence' (sometimes shortened in common parlance to 'tea-sense'). Before Shabbat, you make a small amount of "tea- concentrate." You also prepare plain boiled water in a hot water urn. To make a cup of tea, put hot water from the urn into a cup (second vessel) and add some of the tea essence. Since the tea essence is already cooked, we are permitted to place it into a second vessel.17

A final note: Some authorities treat as an exception a liquid that is so hot that it would scald a person who touches it.18 In this case, even liquid in a second vessel would get the status of a first vessel, due to its intense heat. If this liquid is then placed in another (third) vessel, it would be regarded as a second vessel, with all its accompanying laws.19

In the next lesson, we'll talk about two additional issues related to vessels:

3. Plowing: Back to our Roots