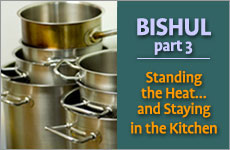 Ladles, re-cooking, roasting, and much more.

In the previous lesson, we learned the halachic categories of vessels. There are a couple of remaining issues that we need to discuss. 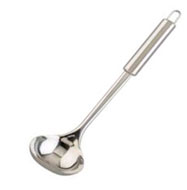 A ladle is used to take food – usually something liquid-y – out of a hot pot. The pot has usually just been removed from the fire, so it has the status of a 'first vessel.'

Recall how we explained that one reason a vessel gets the status of 'second vessel' is due to the fact that its walls are cold, and thus it cools down the food. Yet in the case of a ladle, since it goes directly into the pot, and the ladle itself gets heated up, some authorities treat it like a first vessel.1 Although this is not the only opinion, we act stringently and treat the ladle as we do the pot itself.2

What does this mean in practical terms? If the ladle is a first vessel, then pouring hot food (let's say, soup) from the ladle would be just like pouring from any first vessel. As we learned, anything poured from a first vessel has the capacity to cook uncooked items that it touches. Therefore, we cannot ladle hot soup into a bowl containing something uncooked, such as raw vegetables or dried spices. For that matter, we need to make sure that the bowl itself is dry, since any water droplets would become cooked once they touch the hot soup.3

In addition, we need to make sure that the ladle is clean and dry before placing it into the first vessel.4 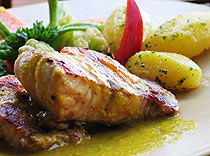 Here, we are not talking about an actual vessel, but food that behaves like a vessel. For example, you've made a roast with potatoes, and you take a potato piece from the pot and put it on your plate. As a solid food that has just been removed from a first vessel, the potato is treated like a first vessel itself.6

What's the logic of this halacha? It is because the solid surface of the potato is akin to "walls" that preserve the potato's "first-degree" heat. (Anyone who has opened a baked potato can attest to how hot it is inside.)

This means that you can't sprinkle (uncooked) pepper onto the potato, or allow it to come into direct contact with other uncooked items. 7 8

These two cases – ladle and Davar Gush – are exceptions, since something that is technically a second vessel is treated as a first vessel.9 We will return to this point at the end of our lesson.

With these issues completed, we can now get into the next big topic under Bishul: reheating.

In common language, we don't say that we are 're-cooking' something, because once a food is cooked it remains cooked. That is true in halacha as well, when it comes to solid food: It is permitted to reheat the food, since it can never become halachically cooked a second time. A well-known phrase in halacha describes this idea: "there is no cooking after cooking" ( ain bishul achar bishul). 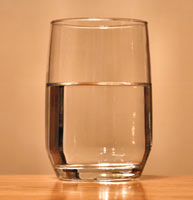 However, this is not the case for liquids. Once they cool off to room temperature10 after being heated, they have the halachic status of "uncooked."11 This is because it is generally no longer recognizable that it was once cooked. (Water is a classic example: Once it has cooled, it is indistinguishable from water that was never cooked.) Thus we are not allowed to reheat a liquid (i.e. "re-cook" it) after it cools.

Let's focus for a minute on a principle described in Lesson #20: We refrain from placing most raw foods into a second vessel, because of the concern that this food is in the category of "easily cooked" (kalei ha-bishul). In the case of a fully-cooked liquid that has cooled, however, we are lenient and allow it to be placed into a second vessel.

How do we determine what halachically is a "solid" and what is a "liquid"? 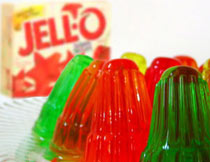 We can begin with the easy cases, like a cold piece of chicken (clearly a solid) and a kettle of water (clearly liquid). A good litmus test of distinguishing between a "liquid" and a "solid" is whether or not it is "pourable." Others use a slightly different test: Once the item is put on a plate, does it retain its shape, or does it run down? Jello is a good example of something that typically retains its shape.12

It's the solid-liquid combination cases that are difficult: For example, how do we view roast beef that has a thin glaze on it? Once the meat has cooled, the glaze congeals and does not run like a liquid; on the other hand, once it is hot, the glaze will melt and become liquid-like.13

The basic approach is that we look at the food's state when at room temperature. Therefore, the glazed beef can be reheated, assuming that when the glaze melts, most of it will be absorbed by the solid part of the food. In other words, if you will wind up with a puddle of liquid once you reheat the item, then you can't reheat it.14 (Of course, the only way to know what will happen is to make a good guess about the volume of liquid-y matter from the beginning.)

Here's a good rule to follow: If the food has a significant accumulation of liquid, then it should not be reheated. If it is merely moist, it may be reheated. Alternatively, a food with a lot of liquid could be wiped off and then reheated.

Now let's take the case of ice cream, You eat it as a solid, yet at room temperature it is a liquid. Therefore it has the halachic status of "liquid."15

Another case to consider: a piece of cooked chicken from the freezer. This will have ice on it, which will melt into water once the chicken is heated. Here too the basic rule is: the chicken may be reheated, but the ice should be removed first.

Knowing what type of food we're dealing with tells us if we can reheat it.16 Now we need to know how the food was prepared, which determines how to reheat it.

Whenever I read cookbooks, I find a dizzying array of terms for preparing food: braising, steaming, roasting, sautéing, and so on. Fortunately, in halacha, these boil down (sorry for the pun) to only two categories:

Why is this so? As we said earlier, regarding a solid food, once it has been cooked, it remains cooked. So putting it through the same type of cooking process again has no effect on it (except for making it warm). However, if you put the food through a different cooking process, you are improving it or changing it in some way. This is, in a sense, a "new" cooking, and that cannot be done on Shabbat. 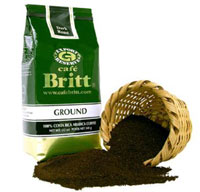 Now is a good time to mention an exception to the rules we've discussed: Cooked solids that get completely dissolved – e.g. salt or pepper – should only be put into a second vessel, but not a first vessel.25

Okay, now let's put on our thinking caps and take this discussion to the next level. Remember the two exceptions where something that is technically a second vessel is treated as a first vessel? That's right – a ladle, and Davar Gush.

Well, there are a few exceptions to these "exceptions." Let's take this one step at a time: 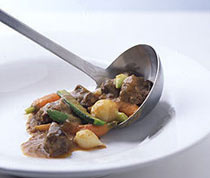 We also learned in this lesson that it is a problem to cook something after it has been baked. That in itself is a bit of a stringency. So the halacha says that when these two stringencies emerge in the very same case, we can be lenient.26 For example:

Jack ladles out some chicken soup into his bowl. He would like to dip bread chunks into his soup. Since this case combines the two issues of a ladle and "cooking something after it has been baked," he may do so on Shabbat.

Miriam scoops out a plateful of hot cholent. She eyes the steaming potato and wants to pour some ketchup onto it. What are the issues involved?

The potato is a Davar Gush and is treated as a first vessel. Also, the ketchup has the status of liquid (although thick, it is pourable) which is cooked but has cooled down. Although each factor taken independently would result in our being stringent, the halacha says that taken together, we can be lenient.27

We've now reach the halfway mark of our discussion of Bishul. It may be valuable at this point to review all of the Bishul lessons we've had so far.