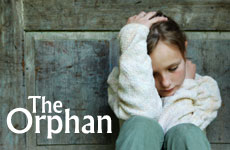 When I converted, I wasn't looking for a new community. But that's exactly what I found.

I am an orphan. But my parents are alive and well.

I haven't spoken to my mother in over ten years. And I might as well not be speaking to my father, who I call (he never calls me) every six months for an always disjointed, awkward five minute conversation.

My close friends are comfortable with me calling myself an orphan. Some of them have confessed that hearing about my childhood has scarred them. It's the acquaintances, the new people who pop into my life, who laugh nervously when they hear me call myself one. "Are your parents dead?" I shake my head. "Then how can you be an orphan?" And they look slightly tremulous as they wait for my answer.

For a moment, I think about not answering, just letting it go, letting them stay in their perfect, pristine plastic bubbles where parents are supportive, kind, there-for-you. Most of my observant Jewish friends have grown up in happy, healthy two-parent homes. How can I tell them about the kind of parents I've had?

I stopped loving my mother when I was eight. It was a defense mechanism.

I stopped loving my mother when I was eight. It was a defense mechanism. I knew if I continued loving her, it would kill me. Over the years, the older I got, the more violent my mother became. The mental illness warping her mind caused her to lash out in horrifying, unexpected rages. A hug turned into a slap. A calm conversation led her to throw knives at my head. Compliments became death threats.

On the last day I spoke to my mother, she held me down after her latest attack and covered my mouth to muffle my screams. I was 17. I ran away the next day and didn't look back until I was 21, when I came back to rescue my sisters. For the three years that followed, I fought my mother for custody of one sister before I finally won.

My father ran away when I was four. While I watched, my infant sister cradled my arms, my mother broke a ceramic platter over his head because he had been cheating on her. (I still have recurring nightmares.) At the hospital, the doctor told my father if it had been glass, he would have died.

My father moved out soon after. When I was 21, after 10 years of not speaking, I asked my father how he could have abandoned us with her. He told me, "I grew up without a father. I turned out fine."

When my little sister recently moved back to New York City with her new husband, she couldn't find an apartment. Though they had saved up money for the move, landlords were skeptical about renting a $1000-a-month apartment to young working-class folks who didn't make more than $20,000 a year.

My sister ended up moving into an apartment with a stranger looking for roommates. She answered the least shady, online ad that she could find and finally, she and her husband moved in. But a week later, U.S. Marshalls broke into the apartment and evicted everyone, including the roommate who hadn't paid $20,000 in back rent. My sister explained this to me in throaty sobs over the phone. It wasn't the first time she'd been homeless. But now, it was her, her husband and a cat with no place to go.

We talked about giving the cat up for adoption (I'm deathly allergic) so they could move into the one-bedroom apartment I share with my husband. But my sister couldn't. "The cat is family," she explained. I felt overwhelmed by my helplessness. I was the older sister. I had always been the pseudo-parent who fixed things. But I had no idea how to fix things this time.

Within minutes, I was inundated with offers from friends who were willing to open their homes.

I did what I have always done to cope with impossible situations, I wrote about it. I even posted something on Facebook. Within minutes, I was inundated with messages, emails and phone calls from friends who were willing to open their homes to my sister, her husband and maybe even the cat.

I converted to Judaism because I spent a childhood fervently praying to God but never feeling comfortable in my parents' Catholicism. At 14, I first read about Judaism and was shocked to discover all my thoughts about religion in one slim "Introduction to Judaism" book. When I finally converted at 26, I wasn't looking for a new community or even a new family.

But that is exactly what I found.

Within an hour of being evicted, my sister and her husband were moving into a new place. As soon as they were settled, my sister called again. She wanted to know if she could borrow some books. "What kind of books?" I asked. "You know, books on keeping kosher, books on keeping the Sabbath," she replied. She didn't want to offend the religious Jews who had taken her in.

I let go of my biological parents long before my conversion. I was more than happy to replace my birth parents with Abraham and Sarah, even if they were only my parents in spirit. That was already more of a connection, a deeper one, than I'd ever had.

But I never expected that when Abraham and Sarah adopted me, the Jewish community would become my safety net, there for me -- and my non-Jewish sister -- if I needed it.

Aliza Hausman is a Latina Orthodox Jewish convert, freelance writer, blogger and speaker. Currently working on a memoir, she lives in New York with her husband who is pursuing rabbinical ordination.

6 Ways Not to Let Isolation Get You Down

The $700 per Pound Mushroom
BBQ Bourbon Cheese Kugel Recipe
Korach 5782: Visit to Lift the Spirit
That Time The Ivy League Found A Way To Limit Jewish Enrollment
Comments
MOST POPULAR IN Israel
Our privacy policy