For one Hungarian family, being Jewish was a curse. Then basketball changed everything.

Susan Horvath was surrounded by hundreds of thousands of faces of murdered children who exposed her family's buried secret. She could have been one of them. Standing rooted to the floor in the Children's Memorial in Jerusalem's Yad Vashem, Susan could not control her sobbing. All her life, her mother had denied any connection to these children by denying her Judaism. Her mother had broken the curse that was the Jews' lot in Hungary.

Susan's son, Josef, was raised with no knowledge to the family's Jewish past. How could Susan have ever imagined that he would lead her here to confront her mother's suppressed history?

Josef Horvath, age 24 and 6-foot-6, was playing in the Hungarian basketball league when someone asked him whether he wanted to play in the 1993 Maccabiah games. "It would be two weeks of fun," they said.

A dormant connection to Jews rumbled at the back of his mind. He had heard that his maternal grandmother, Aranka Lowinger, had been born Jewish and that all her eight siblings married Jews. But he also learned that as World War II raged, the "lucky ones" among them were first crowded into the Budapest ghetto; the less lucky were sent directly to Baden Baden concentration camp. Aranka, the only one in her family married to a non-Jew -- and isolated from her family -- hid in a cellar throughout the war. In 1942 she gave birth to her daughter, Susan. By the time Aranka crawled out of the cellar, she was forever claustrophobic of small spaces and fearful of being a Jew. She discovered that all but one sister had been murdered.

When she crawled out of the cellar, she was forever fearful of being a Jew.

Enter the Communists, the allies who fought the Nazis, her family's persecutors. The Communists offered a vision of a fair and impartial world, one which she was grateful to embrace. In the coming years, Aranka raised Susan to share her belief in the Communist ideology and secularism. Years later, when Susan decided to marry a non-Jew, Aranka supported her choice that would further obliterate track-marks that might surface one day and bring disaster.

Until Josef was 18 years old, there had never been a discussion of anything Jewish in his household. A chance visit to the Jewish cemetery in Budapest made him wonder for the first time about the Jews of his city -- past and present -- and about his grandmother's deceased family. He was sickened by the notion of the dozens of cousins he could have had; Aranka's only sister to survive the war was no longer alive. A rumor that one sister, once believed dead, was now living in Israel could not be verified from behind the Iron Curtain that isolated Hungary under Communist rule.

As a student at the university at Budapest, Josef found himself drawn to fellow students who identified themselves as Jews and he began to read about Jewish history. Once, he ventured into a synagogue, but the strange, foreign language left him perplexed, only emphasizing the divide between himself and the Jews.

In 1992, when asked to play in the Maccabiah Games the following year, that stirring of interest mixed with his sense of Jewishness, and finally his sense of adventure and youthful curiosity propelled him to go.

Nothing had prepared him for the experience of marching into the Ramat Gan stadium in a sea of Jews. And here he was, a part of a historical turning point, as 1993 was the first time Hungary participated in the Maccabiah Games after the fall of Communism. Seventy athletes marched under the Hungarian flag -- all Jewish, all proud. Within days, competing against Jews of all nations, Josef was seized by a transformative sensation of coming home. While he dribbled the basketball, an important piece of himself clicked into place. His spirit soared higher than any scored basket. 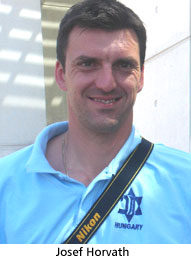 Back home after the Games, the basketball team decided to stay together in the Hungarian League. More significantly, as Josef played, socialized and toured with his Jewish teammates, he found himself soaking up knowledge. Bonded to his new friends by the Maccabiah experience, he no longer felt awkward returning to the synagogue for Shabbat services.

Soon, the then-chairman of the Maccabi Hungary, Andras Bleyer, recognized Josef's leadership skills and began assigning him official roles, including attending the yearly Maccabi World Union Plenum in Israel. In 1998, Josef was elected as the chairman of the 100-year-old Maccabi Hungary Fencing and Athletic Club. The organization, insular under Communism, "had neither fencing nor athletic programs," Josef quips, his brown eyes twinkling. But it was this assignment that made him feel he was finally reclaiming his "Jewish soul."

His powerful transformation had to be matched by the final act of accepting the covenant with his new-found people. In 2000, at age 32, Josef had a Brit Milah, circumcision. "In one week, I was all better," he comforts those who wince at the idea. "And I was so much more complete."

While building a career as a civil construction engineer and a consultant to Israeli investors in Budapest, Josef searched for a soul-mate. He found his match in Henriette, a lively woman whose inner strength and commitment to establishing a Jewish home equaled his own.

But the family's tale of lost-and-found Judaism did not end here.

Josef's sister, Judith, was 18 months older and a runner. She had no interest in her brother's process of reclaiming his Jewish heritage, when, in 2001 she was diagnosed with advanced thyroid cancer. The disfiguring surgery removed glands and tissues from chin to collar bone. Six months later, in remission from cancer, Judith accepted Josef's suggestion to begin training as a long-distance runner for the 2005 Maccabiah Games.

As she started practicing 5 to 15K tracks, she started asking questions, and soon joined Josef for Friday night services at the synagogue. Before long, Shabbat dinner at the Horvath family became a festive ritual that also included Josef's father, a non-Jew who watched with amusement and respect as his children sang and prayed over a feast of Jewish delicacies.

In 2003, for the first time in her life, Josef's mother, Susan, attended a Passover Seder at the Jewish Community Center in Budapest. Yet she could not shake her apprehensions. She was frightened of this new path her children followed, vulnerable to unimagined persecution and suffering that has too frequently been the lot of the Jews. The following year, when Josef's wife gave birth to their first son, Aron, she objected when Josef decided to mark Aron -- and possibly doom him -- with circumcision.

Little Aron did receive a Brit Milah on the traditional eighth day. "At the right age," Josef remarks.

In 2005, Susan's phone rang. The young woman from Israel identified herself as Julie, the daughter of Aranka's sister whose whereabouts had dissolved into the miasma of the family's tragic demise. Unable to resist meeting her only cousin, the following year Susan braced herself for emotions she had always kept under wraps and joined Josef and Henriette for the annual Maccabi Congress in Israel. She met Julie and her Argentina-born husband and three Israeli-born children. Neither spoke Hungarian, but the bond was instantaneous and clear. Susan and they belong to the same clan.

She watched one evening as her son Josef strutted with little Aron perching on his shoulders. The boy's wide, grayish-blue eyes were full of wonder at a world in which he would grow walking tall as his father did at that moment, a confident and secure Jew.

At Yad Vashem, she finally faced the horrors of her mother's life.

It was on the following day, during Susan's visit to Yad Vashem, that she journeyed into a dark tunnel of history and to a world lost to her in more ways than she could count. For the first time she faced the horrors of her mother's life -- and her mother's choices.

On the bus ride back to Tel Aviv, salty tears were still lodged in Susan's throat as she stared out the window at the strange land of rocks and low shrubs, of bluish mountains framed by pine groves. This was a land where her ancestors' presence forced itself back into her life. To ignore her family history had ceased to be an option: her daughter Judith wore a large Star of David necklace resting against her neck scar, representing the faith she believed had saved her life.

Today, as Josef prepares to bring the Hungarian team to Israel for the 18th Maccabiah in July 2009, Susan watches with trepidation as anti-Semitism is on the rise in Hungary, an alarming prelude to the annihilating force that she and her mother always feared. But having been to Israel, Susan's fear for the fate of her Jewish grandchildren has abated. For Jews around the world, the thriving Land of Israel is a bastion of promise and hope.

Talia Carner is a novelist living in New York. She has just completed her fourth novel, Jerusalem Maiden. Visit her online at TaliaCarner.com.

Talia Carner is a novelist living in New York. She has just completed her fourth novel, Jerusalem Maiden. Visit her online at TaliaCarner.com.

What Matters to You: A Journey of an Unsatisfied Soul

On the Death of a Grandchild

Faithful Soldier: Remembering My Beloved Father, Rabbi Melvin I. Burg
Deep Breaths
What Happened to the Truth?
The Japanese Everything Bagel Spice Recipe
Comments
MOST POPULAR IN Spirituality
Our privacy policy