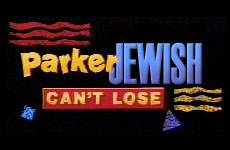 I may just have been destined to star as the "evil" principal Ms. Musso on Fox's hit sit-com "Parker Lewis Can't Lose."

I've been an actress a very long time. Apparently, according to my parents, I started performing prenatally. Mom claims she heard Shakespearean soliloquies broadcasting from her belly month six. I made my entrance, with an unusually large head (predicting the cartoon characters I grew up to play), the doctor slapped me on the back, I started singing and haven't stopped since.

I got onstage at an early age and the school plays in which I performed became subject to every possible sort of hype and geshrie. "Better than a New York performance," yelled an appreciative audience member after my first grammar school play.

"The Narrator, a newcomer named Melanie, showed special promise," kvelled another. "Don't You Miss It!" shilled the locals. Of course, these were my aunts and uncles screeching, but they had great credibility in my book.

These were my aunts and uncles screeching, but they had great credibility in my book.

Such compliments can really turn a little girl's huge head. Based on this scant encouragement of dubious origins, I decided to make a fool of myself professionally. I studied acting old school, from the inside out with the legendary Stella Adler, dance and singing with the best teachers in New York City. I parlayed a stage career into work as a TV series regular often, appearing in hundreds and hundreds of episodes. I've been lucky so far. I've made a living doing what I love, enough to buy myself a home and my mother half of one, and be pretty charitable, too. And I've continued to study and hone all aspects of my craft of creating illusion. Of course, this sort of on again off again career has not been without its drawbacks. Too young, too old, short, tall, cute, offbeat, expensive,. I'm seasoned and realistic about my life's calling, and tend not to take idle chat too seriously.

See, since I started, just about every super market opening in which I've appeared has been touted to go to Broadway. Even the Broadway shows! Every television recurring role or voiceover of mine has been slated for a starring role in a spin off series of its own. And every series has been slated for the bliss of syndication. I've held my breath so long, if I exhaled my carbon dioxide would blow the world away. Another Promised Land for a performer has been having one's TV series put out on DVD. It's the only place an actor can still hope for a few pennies in pocket change and some marketable immortality in this Digital Age, after the producers have their way with skimming their first fees off the top. But the SAG contracts and realities of reality programming have changed the face of entertainment. The Fine Art of Acting, to which many of us old school actors have devoted our lives to master, will soon be a hobby, if the producers' organizations and networks have their way. Actors will compete with non-actors for the privilege of working for low fees or free. Video games will star avatars with unknowns' voices. Special effects and pyrotechnics will continue to dehumanize and dwarf good stage and film actors. And dedicated young actors entering the business today won't be able to make a living or support a family if all TV episodes or films mutate from big screen to streaming webisodes and cellisodes with little compensation but initial filming fees, overexposure and parental joy. Hey, thanks, dahlinks, but we can't live on that.

So imagine my skepticism when the nice Jewish producers of a series in which I adored participating told me our series, a sanctioned release of "Parker Lewis Can't Lose" (to supplant the bootlegged knockoff sold online by crooks) was coming out on DVD according to our old deal struck in the 90's. The show, shot for FOX-TV in its early days was inspired by the "Ferris Bueller's Day Off" film with me playing the role of the apoplectic principal running the fantasy high school like a dictator governing a small South American country. Corin Nemec played my nemesis and our antics together were a blast--no literally a blast, with wild special effects smoking up every shot. I was filmed with vapor coming out of my ears, flaming spike heeled shoes; every furious gesture of mine was accompanied by windows blowing out, bottles exploding. Such a sense of power this gave a short girl with a big head.

We had flashbacks and forwards, we sent up 40's style noir films, complete with fog oil and sepia toning and moving trains. They made me look monstrous, with shots up my flaring nostrils, with my face falling into salad bowls, but vanity be darned, it made all my aunts and uncles plus people I never met, laugh, and I loved every minute of the experience with the kids on the show. It was a very hard style to shoot, and set the trend for pyrotechnical, animated looking fantasy infested shows on FOX, like "Malcolm in the Middle" and "Scrubs" where humans are like live action cartoon characters. But it was one of the most fun gigs we'd all ever had because the guys at the helm, Robert Lewis and Clyde Philips were such hamisha papas. They brought up Parker Lewis Jewish, too

Oy! The joy of knowing it's really really true has now set into motion fantasy spending sprees. Oh how I dream of the plug-in Prius, solar paneling the roof of my house and the top of my own landing strip of a head, flying the whole family see to me in L.A., and, buying those smokin' Jimmy Choo shoes. However, instead, I'm going to invest my electronically registered residual$ to further my study of acting in theater. I plan to invest my electronic, high tech bounties in the traditional, low tech art of creating illusion with only my imagination and craft onstage—to continue to fund my life's calling, now brought to me by the bounties of TV and DVD.

The New Jewish Calendar
It Takes A Lot Of Faith To Be An Atheist
How Instagram Brought Back This Nostalgic Soup
What Makes Eli Run?
Comments
MOST POPULAR IN Jewlarious
Our privacy policy