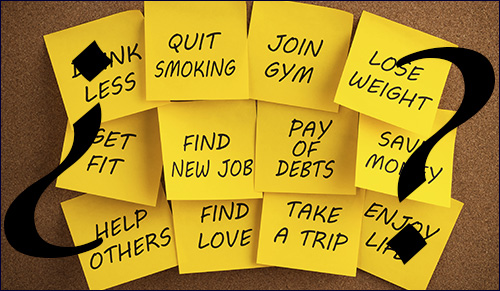 “Spend more time with family & friends.” Um… for 3500 Jews have been nailing this one.

It’s not our holiday or even our New Year’s. Of course the secular New Year’s is hard to ignore when 99 per cent of the world is staring at a ball, while screaming, blowing strange things and Auld Lang Syning it at midnight. The next day, after football and mega ham and cheese hoagies they face the dreaded task of making “resolutions.” Do they keep them? I have a Gentile friend who makes the same ones every year. She’ll lose 10 pounds, eat healthy, and get rid of her desk job. She’s a trooper, that is, until January 3rd where you’ll find her face-down in a chocolate layer cake under her cubicle. This, of course, is why she makes the same resolutions every year.

“Reduce my stress.” But to Jews, stress is a motivator!

We Jews are expected to practice our religion and beliefs daily, no excuses. Do we fall short at times? Of course, but much of our lives are spent trying to be good Jews, empathetic human beings, and to give back to the world and those we love.

So what are the differences between their resolutions and ours? Let’s look.

“Spend More Time with Family & Friends.” Over half of the U.S. population resolves to spend more time with loved ones.

We Jews have spent 3,500 years nailing this one. If we’re not bringing our 40-year-old children brisket, we’re “checking in” twice a day, doing their laundry, paying for them to “find” themselves, building a third floor so they and their children can move in, and maybe having them followed by a government agency with three initials. This is not an easy task, but We Jews are on the job when it comes to spending time with loved ones. In fact, if we spent any more time with them, they might decide to re-locate to Sri Lanka, or block us on Facebook. So, we might, however, resolve to think about ourselves for a change without sighing, and determine not to show up on their honeymoon.

“Get fit.” For non-Jews, regular exercise is a good thing. Studies have shown it helps them live longer, lowers blood pressure, is good for their arthritis, makes them look better, and perks up their mood.

We need to be perky? We’ve learned that only a yutz is perky and leaving himself wide open for (pooh pooh) a ceiling falling on his head. It starts early. Show me one Jewish kinder who chose the Jungle Gym instead of the swings? I, personally, exercised with jacks to increase my finger strength so I could hold a gezunta pastrami sandwich in half a hand. But more. According to research done at the Boca-Technion Institute, the JM or Jewish Metabolism works best when it’s not disturbed by running, jumping, twisting or climbing. Vertical makes us dizzy. We are a horizontal group that revs up lying down. For MOTS, a hammock is healthy and unless you move, chances are you won’t break anything vital. I would, however, recommend you purchase a cheap bike that goes nowhere, and enjoy the extra space upon which to hang your husband’s underwear.

“Lose those extra pounds.” According to them, 66 percent of adults are overweight or obese.

Who are “they”? Some meshugge actress or model who thinks a dandelion is a bissel chubby? According to them, an ideal height to weight ratio is 88 pounds at say, 5’10.” Who but a lunatic would keep a log of carrot calories? We Jews on the other hand are born with the ZG or a Zaftig Gene. Now this is not only sane, but historically encouraged. Look at Renoir and Rubens concept of feminine beauty, before Skinny-Skin shakes, Thighs-Be-Gone contraptions and bulimia wards. Each of their models were a size 22. So, should you be 5’2” and 189 pounds like your bubbe, tell yourself you’re not fat … you’re either suffering from an extended case of Jewish baby bloat or curvaceously Queenly.

ALTERNATIVE: “Eat healthy.” Trust me, there are more 90-year-old Jewish people in the Hebrew home, dancing a Hora after a century on a shtetl diet, including enough schmaltz to blanket Uzbekistan than Gentiles ODing on herbals made from adulterated seaweed.

“Quit stressing out. Take up a hobby.” How many Gentiles do you know suffer from chronic stress– and admit it? Quaking, they hold it inside and put on a happy face, until one day they burst and the men with the white coats come to collect them.

To us, stress is fuel, moving us to “get involved” by fixing our mates, kinder, and the vilda chaya next to us in the elevator at Bloomingdales. Stress is our Trigger of Love. According to the renowned Jewish Indian doctor, Duvid Deepakawitz, our tolerance for stress is biologically higher than any other creature found in nature. The more stress, the more we and our dearest feel we’re “on the job.” The Dr. also added that “even little stresses - say, your brisket is dry, your daughter is 15 minutes late, or your mechatunum want your grandchild to be named ‘Loki’ after their dead Uncle Lichai is seen as not only a wonderful opportunity to ‘mix in’ but makes an absorbing hobby.” What? A smart Jew needs to put a puzzle together showing Mt. Everest during a snow storm?

“Travel and enjoy life more.” Who doesn’t say, “Mildred, now that the children are 16, it’s time we took a trip. I was thinking we could rent an RV and drive to a Harmonica Museum in Tuscaloosa, or maybe something exotic like a vacation in Yemen?”

We Jews maintain a three point destination: Miami-New York-Jerusalem. In over three millennium we haven’t “traveled” enough? But instead of running “to” we’re usually running “from” – Czars, Dictators, and neighbors in sheets with matches. Our goal is to stay put. A split-level in the suburbs, with a lawn, a gate, where traveling consists of walking to Shul and strolling back home is a delight for Members of the Tribe who can then lie in our hammock, down a Cel-Ray and be contented that we’re not forced to shlep through a border – unless of course, we’re crossing into Miami or Mount Sinai (not the hospital).

Why I Love Telling Jokes at Orthodox Synagogues