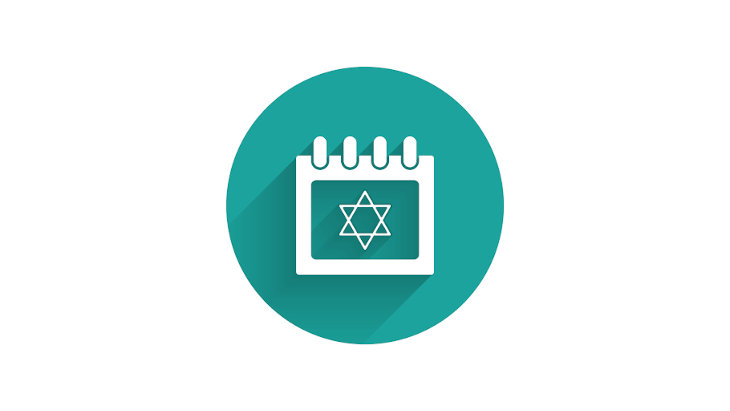 It’s hard to organize your day, let alone your year. That is why I am here to help with your Jewish calendar of what will be in 2020.

Make resolutions. I did. I don’t know why I included “no more eating chocolate.”

January 1st – I already ate chocolate. It was a Reese’s peanut butter cup.

Go to a Bar Mitzvah. More eating. You’ve already eaten too much brisket this year.

First free day of the year. Kids are out of school and on a day trip. You are happy you spent the $800 on the day long ski camp. It’s worth it.

Argument in the Knesset.

9th – Purim. You are happy the holiday is finally here and don’t need to buy more costumes for the kids. Why did they have to bring back the Ninja Turtles? You should’ve kept that costume from when you were a kid. You are hoping that you not receive mishloach manot containing a thimble sized Johnny Walker your friend stole from ELAL, or lemon wafers in a package that has somebody else’s name on it.

Something anti-Semitic happened so now you’re thinking about moving to Israel. Israelis hate you for thinking their country is only an option of last resort.

Vote in Israel. Nobody shows up to the polls this time. They all gave up.

8th – Passover Seder. See your cousin from Oregon who you only see on Pesach and whose hair gets longer and thoughts on genetically modified organisms gets more extreme with each passing year.

Why is there another election?

Your parents are still made you went to the in-laws for the holiday.

20th – Yom HaShoah. Show up to the community event. You are on the committee. At least the committee did something worthwhile.

27th – Yom HaZikaron. Remember Israel’s fallen soldiers. Moment of silence in Israel is meaningful. We still have to go to work.

Another birthday party. You don’t think you can have any more kids. They all have too many friends. You can’t go to the bowling alley again.

You go the Dollar Store and load up the closet with three hundred gifts. Your kids’ friends think you are cheap.

You had meat for lunch which means you can’t have the pizza at the birthday party. What are you supposed to eat?

26th – For the next two days you’re preparing for Shavuot. You’re trying to find every dairy recipe you can. Why are blintzes, lasagna, pasta, quiche and cheesecake not enough for these people?!

27th – You learn that is as good as blintzes. You took the crepe you made and rolled it up with cheese inside. After all of that work, the crepe is a blintze.

Child is born to your sibling. Big mistake. They only gave the kid one name, and now the other side of the family is really mad. The whole Bris they had to explain how Moshe is named after grandpa Moshe on the father’s side and Grandpa Justin on mom’s side too. Nobody is buying the explanation that Grandpa Justin had the soul of a Moshe.

Another shul meeting. You don’t know why you joined this committee too.

Kids go to camp. You are getting ready to do the happy dance.

Voting in Israel. They stopped giving days off of work; too many businesses are going bankrupt from all of the days off work for election days.

You just learn you have to send your kids care packages to camp. $10,000 for two months isn’t enough? This camp can’t give kids snack?!

Visiting Day. You thought you didn’t have to see the kids for the summer. Wondering what you paid for.

29th – Tisha B’Av. Temples were destroyed and this is a hard day for the Jewish people. Considering you are mourning all of the tragedies that befell the Jewish people you feel bad for complaining that you are dehydrated.

You have to attend a bunch of weddings. No, you cannot bring gifts you bought at the Dollar Store. But you really want to.

You go to the Catskills and see everyone you know from New York.

4th – Tu Bav. The holiday of love is celebrated by singles going to hear a speech. Nobody met anybody else, but it was a decent speech. And they had some nice chocolate wafers at the reception afterwards.

Another war is happening somewhere.

12th – Ashkenazim start saying Selichot prayers, adding an extra half hour to the morning service. We start to complain until we hear that Sephardim started doing it a month ago.

27th – Yom Kippur was good. A holiday where we are not allowed to eat. Let’s be honest, we all need that.

28th – After Yom Kippur you weigh yourself and are trying to figure out how you got heavier. Your prayers were not answered.

2nd – Sukkot. It’s just starting to get cold, so we spend this week eating outside. You are finally using the picnic table you bought. You look at your Sukkah and realize that your mother was right when she told you that you weren’t good with your hands.

Since you already went to the in-laws, now you can visit your parents this holiday. You aren’t sure if you are happy about this.

After all of those holidays you go on strike and decide no more cooking. Your pizza bills skyrocket.

26th – Thanksgiving. You make brisket and eat it, to celebrate.

You have some cousins who think they’re just as important as parents so you have to go and visit them.

There’s a birthday party of another kid. Word is getting out that your family is cheap. Your kid is starting to be ostracized thanks to the Dollar Store gifts.

10th – Chanukah. Dollar Store purchases finally paid off. Family is coming in. You aren’t sure if you have enough clean bedding for all of your guests. Oh well, it’s not that terrible to sleep on used bedding, is it?

24th – Eat Chinese food and see a movie. This is the one tradition all Jews keep. The Jewish day starts at night that’s why we do this on the evening of the 24th. Even though it’s not a holiday you end up eating brisket anyway.

Jews and Sushi
Blocked Goals and Anger
Why the Mezuzah is Placed on a Slant
Faith: the Axis Upon Which the Wheel of Science Turns
Comments
MOST POPULAR IN Jewlarious
Our privacy policy