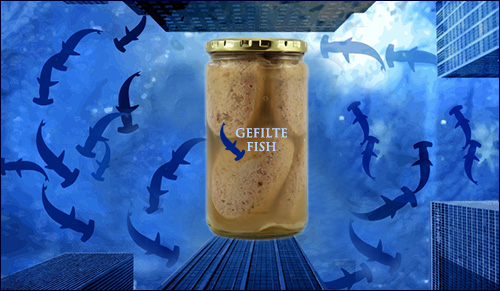 We Jews need our own “Shark Tank.” Meet “Gefilte Tank.”

Who hasn’t seen ABC’s “Shark Tank” where a panel of self-made billionaires hear pitches from geniuses to meshuggenehs for gelt to invest in their dream? They demonstrate their inventions, most of which are patent pending, which range from things like domestic nuclear launchers to going green by converting concrete to grass. The desperate pitcher asks for a specific amount to partner with a shark who gets a percentage.

Gefilte Tank is a place for Jewish entrepreneurs to solve Jewishy problems.

I’m addicted to the show. I’m not alone. It’s a huge hit. And why not? Who hasn’t had that million-dollar idea for say a 100 wires going nowhere in the basement that, when we find out how to put them together, will replace the energy source for the entire city of Baltimore.

Of course Jews and Gentiles share similar needs – sometimes. But face it. We Jews have always been different. For example: One budding entrepreneur wanted gelt for a “mixed martial arts clothing line.” Oy. Jackie Chan, we aren’t.

Then there was the “Rugged Maniac,” a race event over obstacles. What? Racing around Russia and Poland to avoid Czars, maniacs, and Nazis aren’t enough obstacles?

My personal favorite was “Rent A Goat." No more nasty lawnmowers. Just rent a goat and he’ll eat the shmutz on your lawn … and maybe take a taste of your aluminum siding. First, we Jews spent hundreds of years studying in shtetls in Bialystock to get away from goat droppings. Second, my UPS guy couldn’t find a “goat” box to send Billy back.

So it’s obvious We Jews need a Tank of our own. The Gefilte Tank! Here’s our list of Billionaire Gefilte Investors:

1. Suze Essenfeld: infomercial queen who made her first million with the ever popular steam Essenator. She now holds 1000 patents from the Miracle BagelSlicer to her newest, the Jewish Dating Site: “O-U.”

2. Alan T. Piker: The Highway Macher, made his fortune creating signs for turnpikes such as “55 mph,” “MERGE ,” “Fargessen Exit ONLY” which led to an exclusive with I-Hop, Hojo’s and Huddle House.

3. Charles Shmutzger: started out removing shmutz from imploded buildings in Las Vegas which he then sold to Donald Trump’s architect at a bargain, saving The Donald from yet a fifth bankruptcy.

5. Milton Zuckerfleigel: the man behind the Frum FLEIGFOWL turned it into what is now the third largest maker, seller and distributer of positively kosher chicken wings.

Pitch: “Picture it, Gefiltes. Little old Jewish people in Miami who not only can’t see over the dashboard, but have to find their 1997 Seville out of 400 at 4 am in the dark garage to make the first Early Bird. (The one that gives an extra blueberry pancake with a coupon.) Certainly a Gentile here and there has had the problem. Think: The Seinfeld episode where they spent 5 hours shlepping around a 15 tier multi-level garage to find Kramer’s beater. Elaine’s fish died from asphyxiation. Asphyxiation! All because they didn’t know if the car was on Orange 3B! A shanda! Well, no more! Meet THE VECHICLE OR V-SPOTTER! Our custom vertical hood ornament you can design online. Press a KliegKey, patent pending and lit tubes in the shape of, say, a Menorah, will rise from the hood, and Boom! You jauntily walk toward your vehicle, while the other condo members are yelling at their wives for “losing a whole car!” So Gefiltes, who will join with me in making THE V--for Victory?!”

Alan T. Piker thinks it’s genius and went in for 47 per cent.

THE GOYDAR GEVALTOSHPERE. Lenny Luftmensh is asking 2million for a 7% investment

Pitch: “Gefiltes, shalom. Say you’re walking in the park and you see a passing jogger with a hankie look at you with a sneer and say “Ah Jew!” Is the jogger a Jew-hater or sneezing? Your daughter, Ariel’s new “friend” is over to watch a Netflix film. She looks at Ariel’s fave list, glares and says: “Chewie!” Is she talking about Ariel or the legendary Wookiee from ‘Star Wars?’ We Jews know we live in a GoyGevalt world. What’s a Jew to do? Simple. My patent pending idea is a high tech “holographic” brooch equipped with a Goydar device that detects the auras of anti-Semites. Much like a lie detector, when a Jew-hater comes within 50 feet, the brooch with its unique patent pending sensors, measures their body responses – to you, a Jew. So a person smiles. Hoo Ha! The three-dimensional widgets on the brooch will tell you, 1-2-3, whether he’s a mensch or The Wiesenthal Center is still tracking his grandfather in Buenos Aries. So Gefiltes, who wants to join with me and change “Gevalt” to “Ai Ai Ai?”

Not one Gefilte bought in, but two called him a Politically Incorrect Paranoiac.

Pitch: “Hello Gefiltes!! Tell me Mr. Turnpike King, how many Jews do you know are fertummelt when they’re driving on your highways, even with your wonderful signs!? What? For 3,500 years we Jews had time to consult a map? We ran this way, that way and stopped on the way to ask another family, “Where’s the road to Pinsk?!” What did they say?! “Go through the forest, there’s a tree house – then run until you’re out of chickens!” Now those are directions!! Not this Goyish GPS, with the British lady robot who says: “You have missed your turn … recalculate …. Make a dramatic U-turn at the roundabout that says Closed Off for Temporary Repairs and follow 1.4 miles. If you see a large body of water with the sign ‘Shark Crossing’ you have gone too far.” From her alone, if you looked in the Bermuda Triangle, you’d find 2,000 Jewish men who missed Miami!! No more!!! Our JPS, using tried and true Jewish methods, gives directions a normal Jew can actually follow.

The voice you’ll hear is my tante Goldie’s: ‘OK darlings. First, you should get in the car. Don’t forget to lock the doors. Then, pull out and go straight past the pui Burger Barn. Go two, maybe three miles. Next take a left or right if the Sun is behind you. Continue 10-12 miles till you see that statue, the one of a President, go a few blocks, and ask the fish man at Bagel Haven. The original one, not the one that cheats you on the lox. Boom. You’ll be there in two minutes.’ So Gefiltes, who wants to travel with us down the turnpike of success?!

Charles Shmutzger and Ruth Shpelnick went in together for 33 1/3rd percent. As it turns out, Shmutzger wants to recycle the left over pieces of abandoned cars, while Kitenhaber wants to get out of Brooklyn.