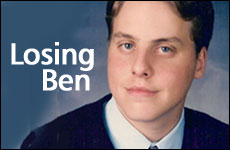 A grieving grandfather, an overwhelmed father and wrestling with God.

My father was not an atheist, no matter what he may have told you.

He was rather a grieving grandpa who witnessed the death of his first grandson, my son Ben, on an operating table at Cook County Hospital, a cataclysm which so profoundly shook the fragile architecture of his belief in God that I wondered if any of it would remain standing when the dust settled.

Earlier that morning, the phones had been ringing off the hooks. I picked up one of the lines to help out. I heard the voice of a stranger.

"Speaking," I reluctantly admitted for I knew, with a parent's intuition, he was not the bearer of good news.

"Are you the father of Benjamin Busch?"

"Yes, I am," girding myself for the worst.

"Your son has arrived by fire department ambulance, having sustained massive, critical injuries in a traffic accident."

At that instant, I felt like I'd been struck by the same truck I later learned had run Ben over.

I tried to speak but my words were stuck.

"Mr. Busch," his voice now emphatically urgent, "I suggest you come to the hospital right away!"

"Suggest!" I repeated. Digesting the ominous meaning of his "suggestion," I sped away to the hospital in a state of controlled desperation. I knew how this day would end. 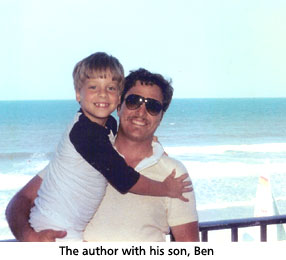 While a team of doctors and nurses worked feverishly to save my son's life, my dad --whom I had never before seen pray -- cried out to the Master of the Universe to spare the life of his grandson, who had been crushed under the rear wheels of a 26-foot long moving van. And though he (and I) pled desperately with the Almighty for His immediate intercession, it was not meant to be. The spark of life in Ben flickered out.

"I must admit to you, Alan, I don't understand how you've done it," my father told me on more than one occasion. "Your brother and I were talking about you the other day," he added, "and we both agree that neither of us could have done what you did."

He can either choose life accompanied by the permanent presence of grief or he becomes busy with dying.

My father was referring to my resolve, following Ben's death, to continue living my life as best I could, a decision I thought necessary for the sake of my other children, my daughter Kimberly and younger son Zac. My responsibility to them was not only to survive our sudden loss but to lead my extended family in the emotional reconstruction of our lives.

I thanked my father but protested that nothing I had done merited any praise.

A parent whose child predeceases him does not enjoy a wide range of choices. He can either choose life accompanied by the permanent presence of grief or he becomes busy with dying.

I don't know how it feels to lose a grandson. I regret the fact I never did ask my father about it. How had he coped with Ben's death? Frankly, the devastation from which my family was suffering at the time was unfathomable. Ben's mom and I had divorced several months prior to our loss, which made the initial mourning and subsequent grief even more difficult. I was so preoccupied with recovering my life and struggling daily to watch over my other two children that I did not spend much time with my father. He was emotionally devastated, and truthfully, I didn't know how to balance the loss of my son with that of my father's grandson.

Eight months after Ben's death, my father wrote in a letter to a friend, "For a while there I was depressed. My grandson Benji was killed in a car accident. He was just 22. I miss him. It left a large void in my heart." He said nothing more, although I suspect he was never quite the same again.

Eight years later, my father and I were chatting one afternoon in his apartment. He was home after spending two weeks in the hospital's oncology unit. My dad was dying of colon cancer and although he was enjoying a well-deserved respite from his suffering, we suspected it would be all too brief. We were together quite a lot, better late than never I suppose. He was telling me his story between hands of gin rummy. I dealt the cards and listened.

"Have you heard it said, son, that there are no atheists in foxholes?"

"Sure. I've heard that." We never discussed faith before.

"Well, I assure you. It's the absolute truth. During the war, there were a couple of guys from my barracks who claimed to be atheists. It was just prior to what later became known as the Battle of the Bulge. After my unit had engaged the enemy, I found myself in the same foxhole with these two guys, our heads in the mud, enemy fire, shells bursting all around. In my life, I had never heard so much praying. 'Dear Lord, please get me out of this. I'll be good. I'll never do that again.' You know, the sort of thing that comes out under deep stress."

Here's my chance, I thought excitedly. "What's your belief, Dad?"

"Me? I don't believe in God," he asserted without even so much as a pause.

My jaw dropped. I didn't expect such an answer. What about the story he had just told me? Wasn't it an endorsement of belief in God? There was something very wrong here. Where was the man who had pled before the Master of the Universe for his grandson's life? I wanted to speak to him.

"Were there a God -- a caring, loving, parent-like God, He would not allow the terrible things in life to happen," he asserted.

I had heard it before. I think everyone has. It is an argument that demonstrates the incompleteness of belief in God without the faith that sustains it in times of crisis.

"Dad, do you recall what you said to me after we lost Ben?"

"You mean when I told you I couldn't have gone on with life like you did?"

"What's the source of my strength? It's you Dad."

"Yes, Dad. Well, I have a secret to tell you." I crossed my arms on the kitchen table and leaned slightly forward. A moment like this had never happened before in our relationship. "I wanted to tell you then that you had never been so wrong! What's the source of my strength? It's you Dad, you're "avi mori", my father, my teacher."

I backed off a bit. His eyes had become misty. "That day when Ben died, I watched you as you pled for Ben, for all of us, and I remember thinking: 'This is my dad!' Your strength, the strength of your faith to be able to plead before God, that strength could only derive from God. So when Ben died, in your profound disappointment you set down the strength of your faith. But you know what?" My father answered me with his continuing silence. "I picked up that faith and made it my own."

That's when my father's silence turned into a smile.

He never realized what an important lesson he had taught me that day. Despite my father's earlier assertion that he would not have survived the death of a son, his own actions disproved his claim. He not only survived Ben's death but continued practicing dentistry successfully for an additional eight years before he entered the hospital for a urinary tract infection, high fever and incessant chemotherapy-induced diarrhea.

To my father, Ben was as much his son as were my brothers and I. He routinely called him "Benji son" -- his favorite term of endearment. In his heartfelt prayers – for "Benji son" and for his own life -- my father personified, perhaps unwittingly, a basic, unadorned, unarticulated trust in the words of the psalmist: "I will lift up mine eyes unto the mountains: from where shall my help come? My help comes from the Lord, who made heaven and earth."

Dad, you were right. There really aren't any atheists in foxholes.

Navigating the Stormy Seas of Faith

The Sounds of Silence

My Bacon Awakening
Don’t Believe in Other Gods Versus God is One
Seeing Without Eyes
Why Shouldn’t We Eat Whatever We Want?
Comments
MOST POPULAR IN Spirituality
Our privacy policy
Aish.com Is Looking for Great Writers