Gifts to the Poor 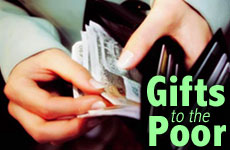 In-depth laws for how to do Matanot La'evyonim correctly!

1. How does one perform this mitzvah?

On the day of Purim, a person must give one gift each to at least two poor people.

2. What type of gift should be given?

The gift may be either money or food.

3. How much food or money must one give?

Each poor person should be given at least the amount of food that is usually eaten at a regular meal, or the amount of money required to buy this.

4. Is it recommended to give more than this?

It is better to spend more on this mitzvah than on Mishloach Manot (sending food packages) and the Purim feast. There is no greater joy than gladdening the hearts of orphans, widows, and needy people. One who does so is likened to God, as it says about Him "to revive the spirit of the humble and to revive the heart of the downtrodden" (Isaiah 57:15).

5. Is it better to give two large donations or many small ones?

Since the primary objective is to bring joy to the poor, it is preferable to give two large donations. This will bring more joy to the recipients than if one would give many insignificant donations.

A check may be given if it can easily be exchanged for cash, through a bank or another person.

Ma'aser money may be used for any donation except for the minimum two gifts.

8. Are women obligated to give?

Yes, since they were also included in the Purim miracle.

9. May a married woman rely on her husband to give on her behalf?

Although the custom is to rely on this, it is preferable for her to perform the mitzvah personally.

10. What if one does not know who is qualified to receive the gifts?

One should give the money to an authorized charity collector who will distribute the money on Purim for the purpose of fulfilling this mitzvah.

11. Should one give two separate sums to the charity collector for two different people?

If the charity collector will divide the money between at least two poor people, one may give a single sum to him to be divided among the recipients. If the money will be given to one poor person only, one must give a second amount to another collector.

12. When is the correct time to perform the mitzvah?

The mitzvah should be performed on Purim during the daytime. It is preferable to do it after the Megillah reading without delay, so that the blessing "She'hecheyanu" can apply to it.

13. Can one fulfill this mitzvah on the evening of Purim or earlier?

14. May one give the money to a charity collector before Purim?

This may be done if the charity collector will distribute the money to the poor people only on the day of Purim for the purpose of fulfilling this mitzvah. The collector should not acquire the money on behalf of the poor when he accepts it, but should act as a guardian of the money until it is delivered.

15. What if a charity collector is unable to deliver the money on Purim?

Every effort should be made to deliver it on Purim so that the poor people can have the joy of receiving the money on Purim. If this is not possible, the collector should acquire the money on behalf of the poor on Purim, and this is considered as if the poor have already received it. The mitzvah would be enhanced if the collector would at least notify the poor about the money, in order to give them some degree of joy on Purim.

16. What if a person cannot find a poor person or a charity collector on Purim?

If a person anticipates this happening, he should give money before Purim to a charity collector to be distributed on Purim. Alternatively, he may call a friend on Purim asking him to donate money on his behalf, and reimburse the friend after Purim. If both methods are impossible, he should set aside the money on Purim and deliver it to the poor after Purim.

17. Must one give money to anyone who asks for charity?

During the entire year a person is not obligated to give charity to all who ask. He is entitled to investigate the worthiness of each cause and decide which charities deserve priority. However, on Purim one may not refuse any person who may be in a state of poverty and at least a small donation should be given unquestioningly. Whoever gives charity on Purim with an open hand brings great light to the higher worlds and annuls evil decrees.

Excerpted from "Guidelines" - over 250 commonly asked questions about Purim (Targum/Feldheim).

Gifts to Friends and the Poor

Fast of Esther
Lessons from the Book of Jonah
Where Are We? The Body, Brain, Soul Problem
Dr. Sheila Nazarian’s Escape from Iran
Comments
MOST POPULAR IN Purim
Our privacy policy
Aish.com Is Looking for Great Writers