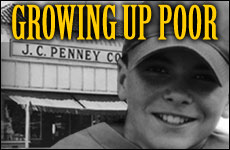 When Bar Mitzvahs are getting as extravagant as weddings, it's time for some serious reassessment.

I grew up poor. Not wretchedly poor. I mean no one, thank God, in my family had to wear one of those pickle barrels with straps like in the Three Stooges movies. Still, my family was far from rich and there were a lot of things beyond the essentials that we simply did without.

The only odd thing about that situation is that I didn't know that I grew up poor until I came to live in L.A. – as a grown man. Once I got here and settled down, my new surroundings just kept shouting at me, "Ross -- you grew up poor! Just admit it!" I was confused. Not surprising; Los Angeles can be a confusing place.

My hometown, Walnut Creek, is now a very affluent suburb filled with 64,000 very affluent people and more Starbuck's and Borders Bookstores than I can count. When my parents moved there in 1963, it was a quiet, small town of just about 15,000 people. Think Mayberry R.F.D without the R.F.D. (there was regular mail service). It was a place with cheap houses where young couples could afford to buy their first home. And that's what my parents did; they bought their first home -- 3 bedrooms and 2 baths -- for the outrageous sum of $26,950. Today in Los Angeles you're lucky if that's about half of your down payment.

My father was the sole supporter of my mom and us five kids. He never had a huge income, just an adequate one. We rarely went clothes shopping and if we did it was when J.C. Penney in downtown Walnut Creek was having a sale. And even at those sales, my father always went first to the "blow out" items or what we affectionately called, "Bargain Betty's Discount Table." Those clothes buying outings were so rare that once, in the 5th grade, I got a glance of my reflection in the glass door at school and noticed that my beautiful brown corduroy pants, the pants I loved most (style maven that I was at 11) were about four inches too short. Suddenly, it made sense to me why so many of the other kids were always saying, "Hey, when's the flood coming!" My first question to my mom when I got home from school was, "Is Penney's having a sale now?"

I had one "big" birthday party. That was in the fourth grade. Most of the other years, my mom just drew a Happy Birthday sign and hung it in the hallway of the house. Presents at birthdays or at Chanukah were neither plentiful nor anything close to the latest, "coolest" game or toy you saw on TV. Sometimes, when things were really tight, my mom would wrap up one of our sibling's current toys and give that to us as a present. To this day I still wonder if she really believed that we weren't on to her and the "used toy" gift syndrome.

I owned one bike my whole life until I left for college -- a used, black, no-speed Schwinn with a rusted book clamp in back. My folks never bought us new bikes, but who cared? We all had fun looking through the want ads together to find a cheap, used bike and then going out to "test drive" it.

I wasn't deprived. I was just a normal, average kid who grew up in Walnut Creek in the 1970's who wore "floods."

For my Bar Mitzvah, I thought I had really "cleaned up." I received a new Bar Mitzvah suit bought on sale for $29.99 (a good deal, even for 1976!), and a total of $35, of which $25 was in a savings bond that I lost. (I eventually found it some 13 years later when I was a starving student in law school. It was worth $48 and change by then. I cashed it and thought I was the richest man in the world.) The reception was simply the normal Saturday "oneg" the temple had with an additional cake my parents bought that said, "Mazel Tov, Ross!" That was it. Period. End of Bar Mitzvah.

I started working at age 11 as a paper boy selling Oakland Tribunes to exiting train passengers at the Pleasant Hill BART station. It was great -- like my first acting gig. I'd "hawk the headlines" as the passengers came through the exit gates. I did five shows a week, rain or shine, freezing cold (which it often was) or sweltering hot, Monday through Friday. I worked in high school, college, law school and every day since.

Now some of you may be saying, "Poor baby! Having to work since you were 11 and have rewrapped toys!" But I didn't see it that way. I see all of those "economic limitations" as a big, "So what?!" I wasn't deprived. I was just a normal, average kid who grew up in Walnut Creek in the 1970's who wore "floods." Never feeling deprived, never feeling "lesser than." Don't cry for me, Argentina.

Then came Los Angeles. Land of the affluent, home of indulgence. Suddenly, I found myself reexamining the economic realities of my childhood. I saw children having big birthday parties every year -- beginning at age one! Each family's party was more extravagant and fantastic than the next, as if there was some undeclared championship competition going on for the most incredible and overdone tot party. Between the hordes of balloons that rivaled those at a national political convention, to the Moon Bounces (an essential), to the clown or magician, to the huge sheet cake(s) decorated according to the toddler's specifications -- it was all too much.

This constant display of indulging children had me thinking that maybe Los Angeles was right. Maybe I did grow up poor!

Then I became religious, and I thought that I would finally be able to get some perspective on this matter. And I did. I learned that the Torah is all about learning humility before God. That Moses was honored with the title of being "the most humble of men." That the greatest rabbis in history, such as the Chafetz Chaim, were poor their whole lives -- and they are still considered great men to this day. That every year at Sukkot we celebrate the freeing of ourselves from the material to remind us that the source of everything we have is the Almighty.

But I also found that even the Jewish community had adopted secular notions of how to "celebrate" children. We, too, had been bit by the "material bug."

It's shocking to see Jewish boys -- from the most secular Jewish upbringings to the most religious upbringings -- having Bar Mitzvah extravaganzas that are bigger than my wedding -- and with better food. A religious friend confided in me that his son's Bar Mitzvah is going to cost him around $40,000; $25,000 if he does it "cheaply." "That's the expectation now," he said to me, sounding resigned to his fate. "It's out of control." How can this indulgence of our young children be a good thing?

The challenge we live with today is not trying to provide enough for our children, but convincing them that what they have is enough.

Things change, and not always for the better. Just as the Walnut Creek I knew is gone -- the J.C. Penney replaced by a Nordstrom, the Woolworth by a Sharper Image, the type of childhood birthday parties and Bar/Bat Mitzvah parties of my "era" have gone the way of the do-do as well. And that's a shame. There was a definite beauty, simplicity and wonderment to my childhood and its surroundings. It was more a childhood of dreams and imagination than of material expectations. Cable TV and video games did not yet exist, so the pretend worlds we visited and played in were the ones we created in our front and backyards. You seemed to value things more because there wasn't a whole lot that you had. But we did have enough. More than enough.

The challenge we live with today is not trying to provide enough for our children, but convincing them that what they have is enough. I am fortunate in that my parents lived through the Depression, my father fought in World War II and my in laws are concentration camp survivors. Because they had a mentality of gratitude for what little they had, they raised my wife and me with that same sense of gratitude. Sure we knew others had more, but for some reason that did not bother us so much. Nor did it compel our parents to live beyond their means merely to make sure I had a clown and a moon bounce at every birthday until age 18.

We have lost that sense of devaluing material things and instead elevate, even venerate conspicuous displays of wealth.

When a 12 or 13-year-old kid needs an entire banquet room at the Beverly Hills Hotel, a band and a catered affair to get in touch with the newfound responsibilities for God's mitzvot, it's time to reexamine our motives. Some leading rabbis have set guidelines limiting such extravagances. Are we following these guidelines? Or are we too afraid of "not keeping up with the Jonahs"?

Our Sages ask a profound question, "Who is a happy person?" Their answer isn't the one who throws the most lavish Bar Mitzvah party, but one who is happy with what he or she has (Ethics of the Fathers, 4:1). As a people, we need to revisit this fundamental yet ever-so wise idea, and more importantly, inculcate our children with it. It's up to us adults. We set the tone for our children's values. It's time we go back to basics. Otherwise, I'm afraid we'll be just a $40,000 party light unto the Nations.

The Crime I Didn’t Commit