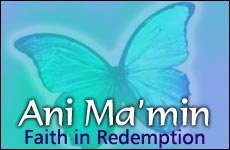 From Maimonides' 13 Principles: The mission of perfecting the world is entirely in our hands.

There was once a very wise rabbi who could answer all questions. One of his students, a precocious young boy, wanted to prove to the class that the esteemed rabbi was not so smart after all. He thought of a foolproof plan.

Excited with this plan the young boy approached his teacher, holding his hands behind his back. "Rabbi, being that you are so wise you surely know what I have behind my back!"

"Indeed I do," said the rabbi. "You have a butterfly."

The wise rabbi thought for a while and then answered, "It's all in your hands."

The mission of the Jewish people is Tikkun Olam -- working at bringing the world to perfection, a world worthy of the coming of the Messiah. Far from being a statement of passivity, it's up to us to make it happen. When and how is entirely in our hands.

Why Do We Say Shabbat Shalom?

Song: "Oseh Shalom" - A Prayer for Peace
How Did I Miss It?: Rosh Hashana
Where's Waldo and the Design Argument
Bagels, The Ghetto, and Yom Kippur: A Journey into the Bagel’s History
Comments