Jewish Unity and the Key to Redemption 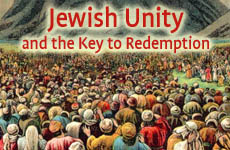 The Jewish People are handicapped if even one Jew has fallen away from our people.

Why was the First Temple destroyed? Because that generation transgressed the three cardinal sins: idol worship, sexual immorality, and murder.

Why was the Second Temple destroyed? Because of unwarranted hatred.

What does the existence of the Temple have to do with love and hatred between fellow Jews?

The Temple was the main conduit for the flow of Godliness into this world. When we had the Temple, there was respect for God, for His Torah -- and for each other. There were no atheists, no doubt about God's existence. Every Jew acknowledged one God and understood the genius of His laws. The world was filled with awe of God and love of God.

As we began to lose that clarity, the flow of Godliness became severed. The prophet Ezekiel (ch. 9) actually describes seeing God's presence withdraw from the Temple. With the loss of the Temple, God has become more concealed -- resulting in a world filled not with clarity but with spiritual confusion. It is no coincidence that immediately following the destruction of the First Temple (circa 421 BCE), Greek and Roman philosophy (as well as Buddhism and Tao) rose to their peak. Similarly, Christianity began concurrently with the destruction of the Second Temple (70 CE).

Back to the Garden

Today, the world is beset by jealousy, greed, theft, violence, lying, impatience, intolerance, deception and fraud. We are suspicious of our neighbors and cynical of our leaders. We are factionalized and worship different gods. Rather than cooperate, we compete. We are manipulative and seek advantage at the expense of others. It's dog-eat-dog and every man for himself. We withdraw into our homes behind a curtain of satellite dishes, internet, and take-out food. We shield ourselves from the harsh realities, and worst of all, we despair of the notion that things can be much better. We shrug our shoulders and lament, "That's just the way life is."

Judaism says: "No!" When Adam and Eve left the Garden of Eden, God assured us of a path back. Statesmen may speak of "peace in our time," but Isaiah said it best: "The lamb will lie down with the lion... and young children will play at the cobra's nest" (Isaiah 11:6).

"Shalom," the Hebrew word for "peace," comes from the root "shaleim," which means complete or whole. "Shalom," says the Talmud, is one of the Names of God, for His unity encompasses all. This "one-ness" is the primary theme of the Jewish Pledge of Allegiance: "Hear O Israel, the Lord our God, the Lord is ONE!"

Just as the ecosystem works to perfection -- with trees breathing carbon dioxide and clouds carrying rain, so too we seek a world where all humanity works together in harmony. This is not to suggest that we should all act the same and ignore our differences. As the saying goes: "Two Jews, three opinions." But because we have differences doesn't mean we can't love and be committed to one another, learn together, and work together for Jewish survival.

One Person, One Heart

Realize that all Jews must be united in order for the nation to be redeemed. The verse (Exodus 19:2) says that the Jewish people camped at Mount Sinai. Rashi points out that the word for "camped" is written in the singular, to indicate that they were "like one person with one heart." Say the commentators: Jewish unity is a prerequisite for acceptance of the Torah.

Further, the Midrash says: If the Jewish people were lacking just one person from the 600,000 Jews at Mount Sinai, they would not have received the Torah.

Why is this? The kabbalists point out that just as 600,000 Jewish souls stood at Mount Sinai, so too there are 600,000 letters in the Torah (including the white spaces between letters). Because just as a Torah scroll is invalid if even a single letter is missing, so too the Jewish people are handicapped if even one Jew has fallen away from our people.

Each and every Jew is completely integral -- regardless of their beliefs or level of observance. In fact, one of the spices used in the incense at the Holy Temple was "galbanum," which has a foul aroma. The Talmud (Kritot 6b) derives from here that even the worst sinners are inextricably bound into the community of Israel.

Rabbi Boruch Ber Leibowitz, one of the great rabbis of pre-war Europe, was quoted as saying: "When I will stand before the heavenly court, and they will ask me, 'What merit have you brought with you?' What shall I answer? Torah? Is my Torah knowledge worth enough to be mentioned? Fear of Heaven? Are my deeds worthy of that description? There is only one thing I could possibly claim -- that I loved every Jew with all my heart. Whenever I walk in the street and I see a Jew, one thought comes to me: A blessing on his head!'"

The Sages teach that the Temple and all that it represents can be rebuilt at any moment. The Midrash says that the Third Temple has already been constructed in heaven, and merely awaits our preparations here on earth. In every generation, an individual exists with the capacity to be Moshiach. The Jewish people have returned to the Land of Israel and made it bloom once again. God is ready when we are. For as King David writes in Psalms 95:7: "(Redemption will come) today -- if you hearken to His voice."

Atonement Today Through Prayer and Teshuva
Why My Iranian Mother Didn’t Want Me to Become a Religious Fanatic
The Jewish History of Prague
Why the Sexual Revolution was Bad for Women
Comments
MOST POPULAR IN Tisha BAv
Our privacy policy
Aish.com Is Looking for Great Writers