Sacrifice and Redemption in Auschwitz 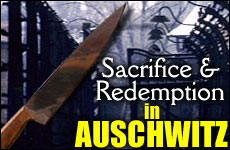 No one survived without a miracle.

There's a synagogue near my office where I often "shoe-horn" Mincha (the daily afternoon prayer service) into my usually over-programmed day. During the winter months, when Mincha is prayed in the late afternoon, corralling a quorum of 10 men for services can be quite difficult as most men – like me – are still at their places of work, far from the residential neighborhood in which this particular synagogue and my office are located.

Six weeks ago, New York experienced its umpteenth snow storm this year and on this particular day a thin coating of ice was added for good measure. At precisely 15 minutes before sunset I left my office as usual and made my treacherous two-minute foot journey to the synagogue already praying that somehow nine other men would be similarly inspired.

Braving the ice encrusted steps leading down to the shul, I nearly slid into the open door and stumbled into an almost empty room. The rabbi was there and like a telemarketer selling prime property to the unemployed was working the phone trying to coax one or two reticent Jews into braving the elements and joining us. Another gentleman was there, one of the reliable regulars with whom I would occasionally chat as on more than one occasion, we were waiting for the room to fill. He looked at me and commenting about the weather invited me to sit down and get comfortable for the duration.

"You know I never asked you where you're from," I started, "although I'd recognize a Hungarian accent anywhere."

"Budapest," he replied with a sweep of his hand.

"So you must have come over after '56," I said, judging him to be a man of about 60 who like so many Jewish people I knew growing up in New York had made his way to the United States as a child in the aftermath of the Hungarian revolution.

"No," he smiled, "I got one of these." With that he rolled up his sleeve and showed me a blue-green tattoo with European style numbers. As if to explain my confusion he added kindly, "I'm a little older than I look: already in the 70's."

His young face still gave me pause. "You must've been among the youngest survivors. How did you make it?"

"Only with miracles. Without miracles nobody survived." A man of uncommon good looks, he pointed to the upper bridge of his nose which had the slightest bump and two small scars on either side."I once made the mistake of being too starved and physically exhausted to stand up quickly enough for a vicious SS officer, so he gave me this present at the end of a particularly vicious beating. He stomped on my face with his perfectly shined, cleated boots.

"It was plain mazal that he only caused cosmetic damage. Had he blinded me I would have been shot dead on the spot, because there was no room in Auschwitz for anybody who couldn't work. No. Nobody survived without miracles."

I marveled at his easy demeanor in speaking about a topic that had silenced most of the Holocaust survivors I knew and I thought this a rare opportunity to learn more about the man and his experiences. "I hope I'm not causing you too much anxiety by dredging up the past, but what other miracles did you experience?"

When we entered the room next to the gas chamber and were asked to undress, it all sank bitterly in.

Smiling broadly he said in a mixture of English and Yiddish, "Too much to count. Even the first moment I set foot in the camp, Mengele – yimach shmo (may his name be erased!) – was making his infamous selection of those he deemed healthy enough to work, herding them off to one side. Those who were too young, too weak or too diseased to work were shoved to the other side, to die. Although I was just 14, God put an idea in my head that when that devil asked my age I straightened my shoulders as high as they would go and loudly shouted '16!'. Only later did I learn that this was the exact minimum age of survival."

It was quiet for about a minute as he seemed to lose himself in his thoughts and was all but oblivious to my eager stare.

Speaking more slowly and deliberately than before, he said in a voice barely more than a whisper, "In the end we were skeletons. They starved us and worked us so hard that we were just bones. We couldn't lift. We couldn't run. The most we could do was only shlep ourselves off the floor in the morning. And from working the gas chamber detail my bunkmates and I knew that it was only a matter of days before we would be 'sent to the showers' to be disposed of as well. On the day the Nazis decided to execute us we left the barracks without so much as a whimper. But when we entered the room next to the gas chamber and were asked to undress, it all sank bitterly in. We were a bunch of young men, children really, who were worked to death and when that didn't come soon enough for the Nazis, we had to be grotesquely killed by gas."

Tears welled up in my friend's eyes and began to build in mine as well. "My friends, who seemed lifeless moments before started to scream hysterically and to throw temper tantrums on the floor. Another went insane. But me, I had this feeling that I didn't want to die like that. I thought about my religious training and remembered my beloved Rebbe who had taught me the first letters of the Hebrew alphabet and remained my Rebbe until after my Bar Mitzvah. I wondered what he would have said to me at this moment."

Abraham's devotion to love of God is a source of heavenly mercy whenever Jewish lives are threatened.

His tears had overrun their banks and were now gracefully gliding down his chiseled cheekbones. "'You are not the worthless scum you are being made to be, but precious Jewish children who are being killed because of their special historic connection to God. This makes you as holy as any sacrifice brought on the altar of the Holy Temple.' I could hear my Rebbe's voice talking to me. 'You are as holy as any human can get. Although Jews do not believe in making human sacrifices, still, God has decided that today you are a human sacrifice.'

"So I thought, what would be a fitting prayer for a human sacrifice? I called out to anyone who would listen, 'Hey, has anybody got a Siddur (prayer book)?' Oddly enough a tattered book appeared. Sensing the end might be very near, I opened it quickly to the Akeidah, the part of the Torah many recite daily where God commands Abraham to take the life of his son Isaac as a human sacrifice. And with more feeling than ever, I began to recite the last prayer of my short life."

I don't remember at which point the rabbi gave up and got off the phone to become drawn into our conversation. But the rabbi's eyes were as wide as mine as my friend began to recite the words of the Akeidah by heart and with his beautiful voice and melodious Hungarian accent the words became a powerfully moving song.

"And they came to the place of which God had spoken to him, and Abraham built the altar there and arranged the wood, and he bound Isaac his son and placed him on the altar upon the wood. And Abraham stretched forth his hand and took the knife, to slaughter his son. And an angel of God called to him from heaven and said, "Abraham! Abraham!" And he said, "Here I am." And he said, "Do not stretch forth your hand to the lad, nor do the slightest thing to him, for now I know that you are a God fearing man, and you did not withhold your son, your only one, from Me."

Narrowing his eyes to no more than a sliver he said, "As soon as I said these words, a commotion broke out with SS officers rushing into the room yelling, 'Get dressed quickly' and we were ushered out of the room with great haste. They told us the Americans were coming and the Nazi cowards had enough trouble disposing of all the bodies that were already dead. They couldn't afford to create any more bodies and as such we were better off alive to them."

He sighed deeply, "No, my friend. Without a miracle, nobody survived."

My Greatest Victory as a Holocaust Survivor

The Forger: The Heroic, Life-Saving Work of Adolfo Kaminsky

The Oyneg Shabbes Archive Collections: The Wills of Israel Lichtenstein and Gele Sekstein