Destruction on the Tenth of Av 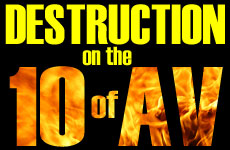 After Tisha B'Av, the burning of the Temple continued for another day. Its effects continue to be felt throughout Jewish history.

The fires that consumed the first Jerusalem Temple began on the ninth of Av, and continued to burn until middle of the following day. The Talmudic sage Rabbi Yochanan stated, "Had I been alive in that generation, I would have fixed [the day of mourning] for the tenth [of Av], because the greater part of the Temple was burnt on that day."

As Tisha B'Av has been a day of misfortune throughout Jewish history, so too has been the Tenth of Av:

On July 22, 1306, the tenth of Av, the Jews of France were arrested and ordered to leave the country. Approximately 100,000 were forced to wander in search of new homes, and many perished along the way.

The Jewish community was not aware of the planned expulsion, as France's king, Phillip the ‘Fair', did not want them to flee in advance with their assets. One of the monarch's motives for expelling the Jews was financial. Phillip saw plundering Jewish wealth as a way to shore up France's economic woes. No doubt, frustration at centuries of failed attempts to force the Jews into apostasy was also a contributing factor.

The expulsion had serious consequences beyond the immense human suffering. It ended the great era of Jewish scholarship of the Tosaphists of France, whose commentaries illuminated Talmudic texts.

Some local European provinces had previously expelled their Jews, but this decree -- which applied to most of France -- was by far the most significant expulsion to date in Medieval Europe. The expulsion also set a precedent for other mass expulsions, which plagued the Jews of Europe in the Middle Ages. The existence of Jewish communities within a European country became precarious. Jews never knew for sure if they might be compelled by law to pack their bags.

Ten years later, Louis the X invited the Jews back to France. Some accepted his offer. The return of the Jews of France would not last, however. They were expelled again in 1396 by Charles VI.

While Jews in some countries were being expelled, other countries simply denied Jews entry.

In the late 19th century, England was a haven for tens of thousands of Jews fleeing oppression in Russia. Many of the immigrants made their way to the East End of London. Their continuous flow had slowly aroused the opposition of many British lawmakers. Some as far back as the 1880's dubbed the immigration wave, "the alien invasion." Many viewed the these Jews as a pariah, or a "state within a state." With the increase of xenophobia, laws were proposed to limit this flow into Great Britain.

On August 11,1905, the tenth of Av, the Aliens Act was passed. This entitled an immigration officer to deny entry to an 'undesirable immigrant,' defined as one who had no means of earning a living, one who is judged to be a lunatic, or one who was convicted of a nonpolitical crime. The bill also allowed for the expulsion of those who had already immigrated and were deemed undesirable.

With the passage of the Alien Act, immigration restriction had become law. This British anti-immigration policy would become increasingly stricter over time. It also impacted American policy, and in 1924, the U.S. Congress passed the Johnson Reed Act which severely restricted the flow of immigrants from Eastern Europe. These restrictions remained in force throughout the Holocaust, having grave implications for European Jewry in desperate need of sanctuary.

On the tenth of Av in 1929, Arab hatred of Zionism once again boiled over into full-scale riots.

The Arabs of Jerusalem were well aware of the significance of the Western Wall to the Jews and used this holy site to incite against Zionism. A few months earlier, the British consented to Arab demands to limit prayers at the Western Wall. In the middle of Yom Kippur services, British soldiers entered the grounds of the Western Wall and removed the mechitza, the divider separating men from women when in prayer.

Meanwhile, the Mufti of Jerusalem, Haj Amin Al-Husseini, whipped Arab masses into a rage by charging that the Jews were attacking the Muslim holy places. On August 16, 1929, as a newly constructed door near the Wall was opened, Jewish worshippers were attacked, despite British assurances.

The next day, thousands of Arabs armed with clubs, swords and daggers converged upon the Mosque of Omar to hear impassioned hate speeches. The cry of "slaughter the Jews" spread throughout the Holy Land. Over the next ten days, Arab riots would take the lives of 133 Jews and leave 339 wounded. In Hebron and elsewhere, Jewish communities were ravaged by Arab mobs.

Throughout the Arab world, mass demonstrations were held in sympathy with the Palestinian Arabs. In Iraq, 10,000 assembled in anger over the victims of "British Zionist aggression." This pressured the British to yield to Arab terms: Passfield White Paper of 1929, and the MacDonald White Paper of 1939 imposed severe restrictions on Jewish immigration into the Land of Israel -- subject to Arab consent.

In 2005, on the tenth of Av, the government of Israel began the Gaza Disengagement, where 9,000 Jewish residents were evicted from their homes. Despite mass rallies against the disengagement, and an orange-ribbon campaign, Prime Minister Ariel Sharon implemented the plan with the hope of reducing security concerns and diffusing the demographic problem of Gaza's 1.5 million Arabs. Upon completion of the evacuation, all 21 Jewish communities in Gaza were bulldozed and destroyed. Only the synagogues were left standing; these were then torched by Arab mobs.

The destruction of the Temple, which continued into the tenth of Av, was an unfortunate harbinger of more tragedies to befall the Jewish people on that fateful day.

Larry Domnitch is the author of 'The Cantonists: The Jewish Children's Army of the Czar', recently released by Devora Publishing.

In the Narrow Places: An Introduction to The Three Weeks

The Roots of Destruction