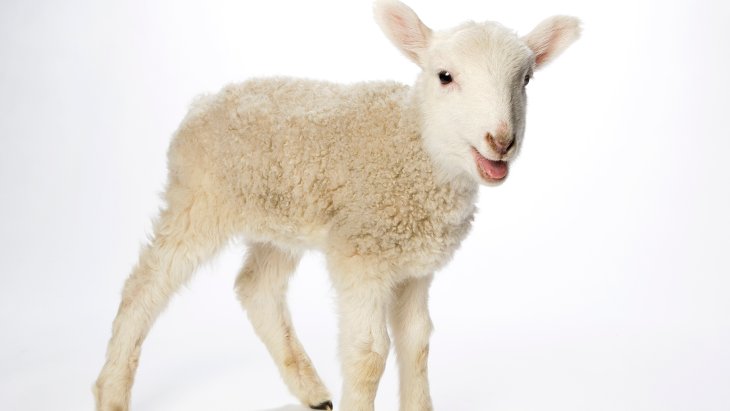 I’ve never liked the idea of animals dying for me… or God.

Imagine that you lived in the United States in the early 1600s, in one of the first settlements – Jamestown, Virginia or near Cape Cod – where the Pilgrims started out. Life was, to say the least, hard.

Less than half of the Pilgrim families that landed at Plymouth Rock survived that first winter. Fewer than 150 of the 700 original Jamestown colonists survived the first three years.

Now imagine someone from the year 2019 shows up. Someone who lives on that same east coast where you are barely surviving. They describe life as we live it today. They tell you that people live in multi-story buildings, that it's possible to travel from one area of the country to another, even one country to another, in only hours. They talk about places where you can buy all the food, clothing or anything else you need.

Long before that person began trying to explain telephones or the internet, you'd decide that they were either crazy or a liar. How else could you respond to such outlandish stories?

I have a similar problem when I try to imagine what life was like when we had the Holy Temple in Jerusalem. What happened there is so far outside of my current reality that I just can't wrap my mind around it. Especially the idea of bringing sacrifices.

It wasn't that I didn't want the Temple re-built. Believe me, I do. But I always hoped that it could be done without all those sacrifices.

I've always thought it was both uncivilized and unnecessary to slaughter all those innocent animals, not to mention unsanitary. Ick! I mean, what kind of a way is that to show my love, my joy, my appreciation to God?

I would think maybe it was just something that was necessary "back then," but we certainly don't need to do that sort of thing anymore.

My stomach always got queasy thinking about the sight and sounds of the animals being slaughtered, and the blood being slathered all over the alter.

I am also extremely sensitive to odors, so imagining the smells of blood and slaughtered animals and burning flesh only added to my nausea. It was beyond me to imagine all of that being "a pleasing smell to the Lord."

Because of these imaginings, I struggled with the part of the prayers where we ask for the rebuilding of the Temple and the re-institution of sacrifices. It wasn't that I didn't want Mashiach (the Messiah) to come, or that I didn't want the Temple re-built. Believe me, I do. But deep in my heart, I always hoped that it could be done without all those sacrifices.

But one morning, as I was saying that part of the prayers, I had an insight based on something I learned from Rabbi Stephen Baars.

What if I simply couldn't understand what it was like when the sacrifices were made in the Temple? What if, like the American colonists from the 1600s who wouldn't be able to understand life in America in the 2000s, what if it was so outside of what I have experienced that I am just not capable of even imagining what it was like when sacrifices were made when the Temple still stood?

After all, God's presence dwelled in the Temple. Has anything in my life come close to that experience? Maybe. I have had moments when I sensed the shadow of God in my life. But sensing the revelation of the Shechina, the Divine Presence that filled the Holy Temple? That had to have been so very much more.

Imagine you are there:

What if… what you saw wasn't intestines and blood but the living Presence of God hovering over the alter, a tangible vision of the Transcendent, inviting you to participate in an eternal dance with the Divine?

What if… what you heard wasn't the screams of dying animals but the singing of God's praise by His angels and you answering, harmonizing in joyous song about the wonder and love of God?

What if… what you smelled wasn't horrid and overpowering, but pure and fragrant: sweeter than incense and spices? Until every breath was filling you, opening you up, until every pore in your body was taking in the aroma of the world, breathing in time with the entire universe?

What if… after all your other senses were completely overwhelmed by these fantastic sensations what you ultimately felt was simply... God.

What if… after all your other senses were completely overwhelmed by these wonderful, fantastic sensations, what you ultimately felt was simply... God. You were more than filled with God. You were overflowing with God.

And it was the most wonderful, and, of course, completely indescribable, thing you'd ever felt.

And you were almost totally, completely, wholly, a part of it all. Almost.

All you would want would be to push past that almost all the way into the Presence that is God. And after having lived with the direct and immediate sensation of what it means to be connected to God, you would never – ever - want the experience to end.

But, of course, it would have to: when the sacrifices ended, or when the festivals ended, or even just when the day ended.

However much a person might want to stay in that state of closeness to the Eternal, we live in a physical world. We need to go home, back to our jobs, to tending our families; to eating, drinking, sleeping. The wonders of the sacrifices would fade.

But what if… all those overwhelming sensations and emotions didn’t fade completely away? What if they became a tiny little flame that managed to survive somehow, deep inside, under the hearts of those who were blessed to experience the sacrifices?

What if… that tiny little flame remained, even after the Temples were destroyed and the sacrifices were no more?

What if… it still burns, tucked safely away beneath the hearts of the Jewish people? So that even though we don't really remember, we can't really forget either?

Because there is still an echo, passed down from generation to generation, that we can just barely hear if we listen hard enough; just barely feel if we open our hearts enough?

What if …my issues with the sacrifices wasn't really a problem with what happened in the Temple? Instead, they were a problem with my inability to recognize that tiny little flame inside me and allowing it to open my mind to what my heart already knew?

Right now, I am preparing my mind and heart for Tisha B'Av. So I am spending a lot of time thinking about the destruction of the two Temples, and hoping that my thoughts about that tiny little flame turn out to be true.

Because that would mean that I’ll be able to focus, with no reservations, on the wondrous experiences and the closeness to God that the re-built Temple will bring us.

So that I will be able to say, with a joyous and undivided heart: may it be soon.

Building Your Own Temple
It Takes A Lot Of Faith To Be An Atheist
How Instagram Brought Back This Nostalgic Soup
What Makes Eli Run?
Comments
MOST POPULAR IN Spirituality
Our privacy policy