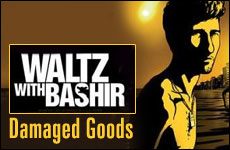 Although a magnificent piece of art, this film is damaging to Israel.

The other night, I watched on TV as various leaders in the Israeli film industry partied at an event held in honor of Ari Folman's documentary, "Waltz With Bashir".

"Wouldn't it be great if we got the Oscar?" asked a beaming Channel 2 presenter after the footage was shown.

My answer is that, no, it would not be great. It would be terrible. This film has done enough damage already, and after the Oscars it is going to do a lot, lot more.

The film is by any standards a magnificent piece of art. If Ari Folman had climbed into a time machine, gone back 20 years, and taken a professional cameraman with him into the Lebanon war, he could not have come back with more emotive and meaningful material than what he has recalled from memory and projected onto the screen. And his film is a work of great emotional depth and sensitivity. For the purposes of internal national debate, this is a film that every Israeli should see.

No reason, rhyme or context is given for the war. No enemy is depicted to speak of.

However, a glaring omission is immediately apparent at the film's beginning, which intensifies as it progresses: no reason, rhyme or context is given for the war. No enemy is depicted to speak of. Although the faces of Israeli friends, soldiers, therapists and politicians are lovingly illustrated in close-up all the way through the film, the enemy being engaged has no name and no face. Only once in the film is a teenage boy with an RPG on his back, brought into focus, and it is not clear who he belongs to, or what he is fighting for.

The eerie backdrop against which the film plays out is that the enemy hardly exists at all, or that he is a figment of the Israeli imagination. Soldiers are cut to pieces by sniper fire, but who are the snipers? Gunmen shoot down from balconies and roofs, but which army or political faction do they represent? Palestinian terrorists are sought in streets, orchards and refugee camps but why are they relevant to Israel, if they are operating in Lebanon? A viewer who knows nothing of the background to this conflict could be forgiven for believing that thousands of Israeli soldiers simply woke up one morning and decided to go to Lebanon to kill people.

For this reason quite a lot of Israelis have serious issues with his film and do not think it should be screened at all, let alone win an Academy Award. A friend of mine who watched the film at Cinemateque Jerusalem overheard viewers in the rows behind her say they were appalled by the film's lack of context. An Australian Christian told me even more bluntly, "The film confirms for Australians what they already know: Israelis are warmongering murderers."

Ari Folman must have known when he made "Waltz with Bashir" that films do not get screened in a vacuum. This film is up for an Academy Award at a time when virulent hatred of Israel, constant comparisons between the IDF and the Nazis, purposeful omission of the moral and military background to our wars, and a deliberate disregard for our civilians and their safety, have begun to flourish across Western Europe, Scandinavia and North America. The film plays into the hands of the worst of our detractors, depicting us as mindless invaders who care little for human life.

The success of the film can therefore not be wholly attributed to its brilliance as a piece of art. It is linked to the delighted glee with which those who hate us take it as evidence of our perfidy. Perhaps Mr. Folman did not understand this when he made the film. Israeli filmmakers are after all remarkably naive when it comes to how Israel is perceived abroad and the power of the new malice that has been unleashed upon Israelis and all Jews everywhere.

Many will argue that Folman's creativity should not be hampered by political and cultural considerations. I say this is nonsense. All of us who function in the adult world, have to weigh up the implications of everything we do before take a course of action. None of us are exempt from this arena of human ethics. Not even documentary film directors

And why is there an ethical question here? Because Israel is, in this decade, not just fighting a war with Hamas, a war with Hezbollah and by extension a war with Iran. It is fighting a war of ideas. A war in which it is being depicted as the sole cause of misery and suffering in the Middle East, a war in which the justification for its existence has been called into question. A war which is being felt by every European Jewish schoolgirl who is no longer safe coming home on the bus, and every American Jewish student coping with hostility and violence on campus. Even if Ari Folman cares nothing for these things, they will affect him in the end anyway. By the time the next generation of Israeli kids in Folman's family is considering their options for university, most of the campuses in Europe will be probably out of bounds to them. And it will only be a few years before Mr. Folman himself, as an ex-fighter of the IDF, will be prosecuted for war crimes if he so much as touches down in a British airport.

We will be debating over the next decade whether Ari Folman has, with his film, done his country a great service or caused it irreparable damage. My vote is for the latter. With all due to respect to him as the gifted filmmaker he is, it would have been better for him to deal with his Lebanon ghosts in the psychotherapist's office. I am not being sarcastic or disparaging here, God forbid. As I have both a son and a daughter now serving in the IDF, no one could be more respectful (and more fearful) of the emotional damage done to Mr. Folman than I.

But if I could meet him in person I would ask him if the artistic expression of his feelings on film are worth all the rage and hatred that will be stirred up against Israel as a result.

Katie Green is an independent film director in Israel.

James Bond: 5 Jewish Facts
Olivia Newton John’s Grandfather was a Nobel-Prize Winning Jewish Physicist
Don’t Believe in Other Gods Versus God is One
Seeing Without Eyes
Comments
MOST POPULAR IN Current Issues
Our privacy policy
Aish.com Is Looking for Great Writers