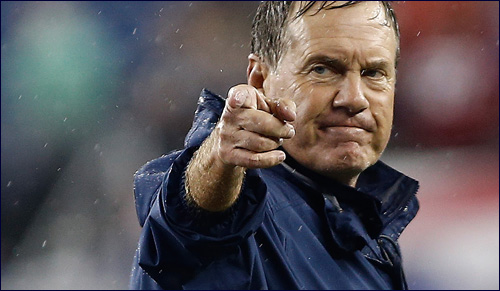 The New England Patriots and listening to God's messages.

It happened last Sunday. For those who follow football it was a tragic error of judgment which caused an unexpected loss for one of the best teams in the league and may well play a major part in determining who gets the coveted honor of being in the playoffs.

Those who watched couldn’t believe it. The New York Jets were playing the New England Patriots. The game was tied and went into overtime. The rules called for the toss of a coin. The road team, in this case the Patriots, had the option of making the call. They chose heads – and they proved right. They could choose possession of the ball. Their star quarterback, Tom Brady, would be able to pass and hopefully give them a touchdown.

Statistics make the next move a no-brainer. Everyone knows the object is to gain possession of the ball. To win the call of the coin is to be given what sportswriters call “the gift of the gods.” But inexplicably Bill Belichick, the New England coach, decided to go on the defensive and give the New York Jets possession of the ball. As The Sporting News put it, “The greatest football coach of this generation suffered an epic brain freeze Sunday with a decision that will go down in the annals of stupidity.” Although having won the coin toss, the Patriots were on the way to an ignominious defeat. The Jets won 26 to 20, after quarterback Ryan Fitzpatrick connected on a 6 yard touchdown pass that positioned the Jets for their first postseason berth since 2010. 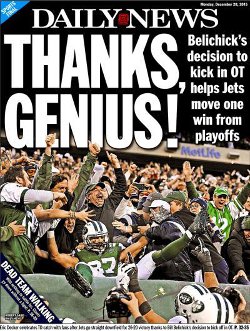 Surely coach Belichick should’ve taken his win of the coin toss as a positive omen. In retrospect, it seems clear he should’ve gone with the decision to take possession of the ball, a decision that is commonly regarded as the correct choice for a winning call on the fall of a coin. But Belichick thought he knew better. And that reminded me of a powerful lesson I learned many years ago when I also made a comparable kind of choice in connection with a wager.

A Day at the Races

It was over a decade ago. I had been invited to lecture in São Paulo Brazil. My host, the internationally renowned Safra family, wanted to make sure I had an opportunity to enjoy the special sites of this beautiful city. One evening a chauffeur picked me up and told me we would be going to the beautiful race track, an experience certainly out of the way for a rabbi but one he told me the family felt that should not be missed in order to understand more of the city’s culture and lifestyle.

The chauffeur told me that my host insisted that to appreciate the experience I make sure I place a bet on a race. If I lose I would be reimbursed. If I won, I could keep the winnings. For the first time in my life I bet on a horse race.

I remember the scene well. I had asked for instructions about how to place a bet. I decided, for no discernible reason other than that the number three reminds us of the patriarchs and how nice it would be if in the merit of my forefathers my number three horse would come in the winner, I put all of my money on three.

But the peril of a different language got in the way. The ticket I was handed said two. And in that instant I was faced with a theological dilemma. I was not given what I had asked for; the number two horse ticket came to me in error. But there are no mistakes in this world. Even a leaf that falls, says the Talmud, was the result of a Divine directive. So perhaps I ought simply to take what came to me by Divine intervention. But, in the classic words of Tevya the milkman, on the other hand – that’s not what I asked for. Aren’t I entitled to my own choice? And what if number three wins and as a result of my timidity in speaking up I find myself a loser?

If God decides to give you a gift don’t be foolish enough to discard it for the sake of your ego.

After much arguing they took back the number two ticket I claimed was given to me in error and gave me the number three I insisted I wanted.

The number three horse came in dead last. The winning horse, number 2, a 40 to 1 longshot, came in first!

So what did I learn from that experience? If God decides to give you a gift don’t be foolish enough to discard it for the sake of your ego. Don’t think you know better and overrule a Divine edict. That is something we could all put to good use in so many moments of our lives.

Too bad Coach Belichick didn’t realize it when God let him win the call of the coin – and then felt the need to override its message and lose the game.