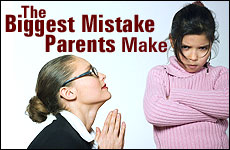 The Wall Street Journal recently had an article of a study about the Middle-Class American family by two Southern California anthropologists. Some of their points dovetailed with things that I’ve been teaching for years.

Among the findings: The families had a very a child-centered focus, which may help explain the "dependency dilemma" seen among American middle-class families, says Dr. Ochs. Parents intend to develop their children's independence, yet raise them to be relatively dependent, even when the kids have the skills to act on their own, she says.

(They) noticed that American children seemed relatively helpless compared with those in other cultures. In those cultures, young children were expected to contribute substantially to the community, says Dr. Ochs. Children in Samoa serve food to their elders, waiting patiently in front of them before they eat... By contrast, the U.S. videos showed Los Angeles parents focusing more on the children, using simplified talk with them, doing most of the housework and intervening quickly when the kids had trouble completing a task...Asking children to do a task led to much negotiation, and when parents asked, it sounded often like they were asking a favor, not making a demand, researchers said. Parents interviewed about their behavior said it was often too much trouble to ask.

Many years ago when our oldest child, Atara was about 4, I purchased a book about raising kids. It emphasized listening to your kids and purports "to help listeners understand children's emotions, gain cooperation, and learn new alternatives to discipline." We tried very hard to follow its prescriptions of expressing back to Atara our understanding of her feelings of frustration as she flayed about in her tantrums, but she was becoming more and more difficult to deal with.

Then I took a page out of the Irving Nightingale (my dad) book of raising children and put my foot down and promised a potch on the tuchus (a little slap on the behind) if she didn't go to bed on time. Magically, she became a much easier child to deal with. Somehow my parents, without any PhDs, seemed to have more effective tools at raising kids than these so-called experts.

The focus of families has dramatically shifted from being parent-centered to child-centered.

In the span of one generation, the focus of families has dramatically shifted from being parent-centered to child-centered. Today everything revolves around the child's schedule, whims, wants and needs. While of course the job of a parent is to ensure the good, welfare and security of a child, at the same time it is also their job to inculcate a proper sense of proportion, discipline and responsibility, and this latter part seems to be a dying art.

I find that the biggest mistake parents make is that they are afraid to be the heavy and expect, let alone demand, discipline, rules and chores. The biggest lacking in today's families is the parent's unwillingness to give their kids chores and responsibilities commensurate with their age and abilities. At the Nightingale home, even 5-year old Batsheva doesn't get a free pass and she fully understands when we tell her to clean up her toys, take her dishes to the sink and the like. She is more than happy to oblige when I ask her to run upstairs and get me my keys.

Our Shabbat guests often marvel how our kids get up to help without being asked. This is because this is how we raised them. There is no secret or magic to this. It just requires that parents from the outset establish this as the norm in the "benevolent dictatorship" atmosphere in the home.

Today the holy grail of raising children is self-esteem. Yet there is little understanding that self-esteem does not come from a parent (or teacher) heaping false praise on half-baked attempts by children in order not to hurt their feelings. Real self-esteem comes when parents make reasonable demands on a child and praise them when they truly get off their behinds, move from their iPods, iPads and iPhones and do something productive in the house or with their school-work.

This rescuing parent syndrome that begins at a very young age sets the stage and continues onward where parents today rush up to college with their darlings and spend the first few days with them "getting them settled in." I have never understood that; Atara and Moishe did very well without us when they went off to Yeshiva in Jerusalem or college in New York. Independence starts at a very young age, and the more self-sufficient a child is, the better off they’ll be for the remainder of their lives.

A home where the kids make the rules, define the order and are the primary focus will look like this:

In about 75% of the families, the mothers came home first and began to "gyrate" through the house, bouncing between the kids and their homework, groceries, dinner and laundry, according to the group's analysis... When the fathers came home, 86% of the time at least one child didn't pay attention to him." The kids are oblivious to their parents' perspectives," says Dr. Ochs.

Little wonder. But a home where the parents ensure that the children all have jobs, chores and responsibilities and where the kids realize that they are not the center of it all is one which will be more peaceful - both for parents and kids.

What's a Father For?

The Magic Pill for At Risk Behavior

How to Bully-Proof Your Child
The Blue Beyond
Great Place to Live
Is Eating Supposed To Be Spiritual?
Comments
MOST POPULAR IN Family
Our privacy policy