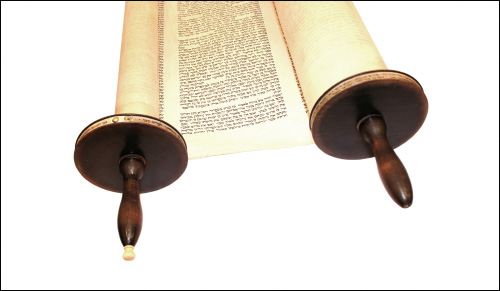 Way #14 is "b'mikreh," the written instructions. The Bible has three parts, totaling 24 books:

The Bible is the all-time bestseller and has made an enormous impact on Western civilization. Everyone should study the Bible at least once in a lifetime.

"All men have an inalienable right" – straight from the Bible. "Love your neighbor" – the Bible. Isaiah's vision of peace adorns the United Nations. The biblical sanction to "proclaim freedom throughout the land" is engraved on the Liberty Bell.

You don't need to accept the existence of God to learn these basic lessons. Whether interpersonal relationships, self-awareness, community relations, or environmental concerns – Torah is the ultimate "owner's manual."

On a deeper level, Jewish tradition says that Torah is the "blueprint for creation." Everything in life can be found in Torah... if you ask the right questions, and possess the right set of tools.

Imagine you received a message from outer space. You might not fully understand its meaning, but you are fascinated. You will study every word and try to decode it.

Torah is the word of God, communicated to the Jewish people at Mount Sinai. If a piece of Torah doesn't seem to make sense, don't pass it off as irrelevant. Keep asking, searching, delving.

Look deeper into what each piece of Torah is telling you. All the stories and commandments are really philosophical messages waiting to be revealed by the intellectually active mind. The Flood, the Tower of Babel, the splitting of the Red Sea – all contain the deepest wisdom for living. Even dates, names, numbers, events and lineage all teach us something. The message is often between the lines. And when the message seems obvious, there's more below the surface.

Let's take an example. In Genesis chapter 18, Abraham is in the middle of conversing with God. Then three strangers pass by and Abraham immediately runs to serve them. At this point the alert reader should question: Why would Abraham stop talking to God in order to help strangers? It doesn't make sense. Even an atheist would admit that talking to God is the ultimate experience!

From here we learn a profound spiritual lesson: Even more important than talking to God, is to be like God.

God created the world for our pleasure. Everything he placed here – fruit, hands, love – are manifestations of His kindness. This world is one big hospitality inn. So when you take the role of host, of serving your fellow man, you are like God. Abraham was wealthy and famous, yet it was not beneath him to serve strangers. He understood the lesson.

Read the Bible intelligently. It is the guiding force of Jewish achievement, as fresh today as it was 3,500 years ago. Don't discount its value without first making an effort to study it. Respect the Bible. It is a hidden treasure, a special message from God.

If you want to understand the Bible, you need to learn Hebrew. There's no way to get the full meaning in translation.

For example, the Torah uses 10 different names for God. Each "name" refers to a aspect of God's essence: all-knowing, all-powerful, prime mover, merciful, etc. But in English, these names are all translated the same, and much of the depth is lost.

Worse yet, biblical translation promotes misconceptions. For example, you'll read a translation and come across the word "sin." Uh-oh. Sin, evil, punishment. But the Hebrew word Chet does not mean sin at all. Chet appears in the Bible in reference to an arrow which missed the target. There is nothing inherently "bad" about the arrow (or the archer). Rather, a mistake was made – due to a lack of focus, concentration or skill.

From here we learn that human beings are essentially good. Nobody wants to sin. We may occasionally make a mistake, lose focus, and miss the target. But in essence we want to do good. This is a great lesson in self-esteem. Simply adjust your aim and try again!

In translation, the message is lost. In fact, entire religions have arose based on mistranslations. So get it straight. Learn Hebrew.

I once came across a magazine profiling a group of hippies who spent the day reading the biblical "Song of Songs." "Song of Songs" is written in the form of a poem, a love song between a man and a woman, symbolizing the relationship between the Almighty and humanity. The message is so deep and beautiful that the Jewish people call this book the "holy of holies."

Afterward, the women proclaimed that they finally found a portion of the Bible written by a woman, because no man could ever understand a woman's feelings so deeply and state them so powerfully. In other words, they concluded that only a hermaphrodite could have edited the Bible. But God? No, that's inconceivable.

Unfortunately, Bible critics usually come from a preconceived position, and when the Bible doesn't fit those parameters, they are forced to make far-fetched conclusions. They don't seriously consider the idea of Torah's divine authorship, of "national revelation."

Yet it is an unbroken Jewish tradition that 3 million men, women and children stood at Mount Sinai and heard the Torah directly from God. And in the 3,300 years since, no other religion has ever made such a claim – because it is impossible to fabricate.

Some critics have trouble accepting the idea of divine intervention. For them, all the biblical phenomenon need to be explained in terms of nature. A book called "World in Collision," for example, explains the splitting of the Red Sea like this:

A tremendous comet approached earth at the time the Egyptians were chasing the Jews. At that precise moment, the comet was in position to tear the Red Sea apart by the force of gravity, leaving dry land between two walls of the sea. The Jews entered the sea, and sure enough, the Egyptians followed. Luckily, the Jews came out the other side just as the comet passed, and the water returned, drowning the Egyptians.

How does this book explain the manna bread that the Jews collected every morning for 40 years in the desert? After the comet passed, particles of petroleum remained in the higher atmosphere. It eventually burned off and mixed with the dew. The falling dew combined with a particular micro-bacteria that digests petroleum products and converts it into protein.

Thus explains how every morning, for 40 years, a nation of Jews picked up manna bread – "dew containing predigested protein." On Fridays, there was a double portion, but he doesn't explain that...

These explanations are missing the point. Torah isn't a history book, a physics book or a storybook. Rather, it is Torat Chaim – literally "instructions for living." Every word, every phrase contains a message how to maximize pleasure in life. Look for the deeper message – the wisdom within – and you will reap immense rewards.

The Time Is Now

The first sentence a Jewish child is taught is "Torah tziva lanu Moshe, morasha kehilat Yaakov" – "Torah was commanded to us through Moses and is the inheritance of every Jew." Torah was meant for everybody. It is not the exclusive domain of some priestly class. Rather, it is a living, breathing document – the lifeblood of our Jewish nation. We are required at all times to involve ourselves in its study and practice. As it says, "You shall think about it day and night" (Joshua 1:8).

Your academic education may have ended, and there may come a point where you are as good a "professional" as you need to be. But learning Torah starts at a young age and continues for a lifetime. As you mature and your awareness of reality increases, so will your understanding of concepts you thought you once knew well.

Every Jew is supposed to review the weekly Torah portion three times, and then hear it again in the synagogue on Shabbat. We review, ask questions, discuss the topics. "What did you see, what was difficult, what didn't you understand?"

After learning a piece of Torah, organize it so it's at your fingertips. For example, the Five Books of Moses are organized into 54 weekly portions and 674 chapters. After learning one chapter, pause and assign a code word or phrase to the chapter. You'll have a handy device to recall the wisdom it contains.

Some people use the excuse, "I'm too old to begin learning." But the Talmudic scholar Rebbe Akiva didn't even learn the Aleph-Bet until he was age 40. This is the same Rebbe Akiva who became the greatest sage of his generation with 24,000 students!

Some people are hesitant to learn Torah because they can't imagine ever becoming a scholar, so therefore "why even get started?" This is faulty thinking. Every drop of Torah study is precious and eternal.

There are two ways to acquire wisdom: through life experience, or through learning Torah.

Judaism says it's better to get wisdom through Torah. Why? Because even though you can learn from experience, there's a negative residual effect. True, a woman who goes through a series of failed relationships will eventually learn what's important in a husband. But if she'd first studied wisdom, she'd have saved a lot of needless headache.

We don't have the patience to get to know ourselves and we want to learn from experience. Many people say: "After I make money, when my business is self-sustaining, then I'll take time out to learn Torah. But I need to experience life a little first."

Do not say: "When I have free time, I will study," for perhaps you will never have time. Realistically, once you're promoted to VP of the firm, do you expect to have more free time, or less free time?

The Torah is a "tree of life" for those who grasp it. When we study Torah, we are not studying an abstract and arcane text of the ancient world. We are in fact discovering the essence of ourselves.

Why is "Written Instructions" a Way to Wisdom?

Way #20: The Art of Conversation