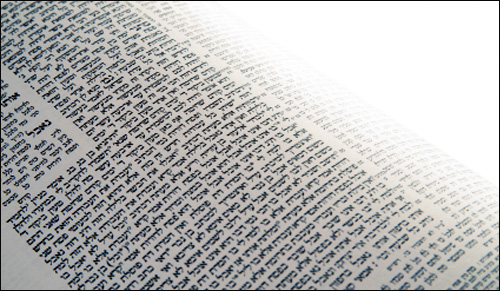 Judaism is not a reference work sitting on the shelf. It's to be lived and internalized.

Most people are familiar with the "Written Torah" – the Five Books of Moses. But many are unaware that 3,300 years ago, the Jewish people also received the Oral Torah – the Mishnah.

In fact, the Oral Torah preceded the Written Torah. At Mount Sinai, God told Moses the 613 mitzvot, along with a detailed explanation of how to fulfill them. At that time, the teachings were entirely oral. It wasn't until 40 years later, just prior to entering the Land of Israel, that written copies of the Five Books of Moses were distributed to the Jewish people.

Imagine you want to get married. There are a lot of mistakes you might make, and once the other person says "yes," you want it to be a one-way trip. So make a checklist before you propose. What character traits are vital for an enduring marriage? What is the difference between infatuation and love? What are you looking for in marriage? Somebody to cook you dinner, or the other half of your soul?

In a 747, the pilot spends a half-hour going through a checklist, before even pulling the plane onto the runway. (If he didn't, don't get on the plane!) So too, you need a checklist for living. Memorize it and keep it with you at all times. This is what Mishnah is all about.

Do you have an encyclopedia? When was the last time you used it? Occasionally you need to look up something specific, otherwise it just sits on the shelf.

Torah is not a reference work made to sit on a shelf. It is meant to be lived and internalized. In the Bible, the basics are laid out in writing, but the remainder must be learned orally. The give-and-take exchange, from teacher to student, encourages us to discuss and clarify, to know it backward and forward.

For millennia, the oral instructions were passed from teacher to student. The student would take notes, then repeat and review until he knew it perfectly by heart. Due to the nature of oral transmission, constant review is the best way to safeguard its integrity: Thousands of people learning the same information guarantees that mistakes do not enter the transmission.

Almost 2,000 years ago, the Romans captured Jerusalem and sent the Jews into exile. The president of the Jewish people, Rabbi Yehudah HaNasi, saw that the teacher-student framework was in danger of being disrupted, so he wrote down the Oral Torah – the Mishnah – to avoid it being forgotten.

As the generations passed, more information – the Talmud – was written down to explain the Mishnah. Today, the basic laws are published in the Code of Jewish Law (Shulchan Aruch) and its accompanying commentaries. But much of Torah is still preserved in oral form, passed from teacher to student.

God, in His infinite wisdom, devised the consummate system for transmitting Torah throughout the generations. It is not a written law, and it is not an oral law. It's both.

Why Do We Need The Oral Torah?

Totafot (better known as Tefillin) are mentioned in the Bible: "And you shall place Totafot between your eyes." But how do we know what they are? What color are they? What size? Shape? What about the straps? How many compartments? What parchments go inside? How should they be worn? Who should wear them? When?

None of this is written in the Bible. For these important details, we need the Oral Torah.

Has the message been successfully transmitted? One only needs to look at an older pair of Tefillin, worn by every adult male throughout Jewish history. If the message hadn't come through clearly, one guy would be wearing a shoe between his eyes, and another would have a blue ribbon, and another would...

Use the Mishnah just as you would an encyclopedia, dictionary or world almanac. When you buy a refrigerator, it comes with a small booklet of instructions. If you buy a 747, it comes with a maintenance library. The Almighty created this world a lot more powerful, and a lot more dangerous. The Torah is the All-World Almanac.

A single word in Torah yields multi-layered understandings – if you know how to apply the right tools. The Torah can be understood on four primary levels:

These four levels form the acronym "PaRDeS," which means "orchard." The Torah is filled with delicious spiritual fruits, just waiting to be plucked and savored.

In fact, that's why the Almighty created us with the need for food. It's a sign that we need wisdom in order to grow. You can't say, "I ate yesterday," or "I ate years ago and now I don't need to eat anymore." We pray three times a day to parallel the three daily meals. You have to grow everyday, to feed the soul.

It's a mistake of Western society that people grow in one aspect but don't grow in others. Someone can become hugely successful in business, but be an adolescent in his spiritual life. Realize that just as your professional ambitions are not the same as when you were age 18, so too your approach to God has to mature and develop over time.

When an engineer has a problem, he looks up logarithm tables. A lawyer refers to case studies. A doctor has medical journals. A Jew has the Mishnah.

If certain symptoms would contradict each other in your bodily functions, you'd go to the doctor and discuss it. So too, when you have a difficulty making sense of Torah, look up what the commentaries have to say. You're probably not the first one to ask this question, and can benefit from the generations of scholars who preceded you. And in recent years, much of this literature has been translated into English.

The best option is to ask a qualified rabbi. He can not only answer your question, but can teach you the tools for learning it on your own. Torah, because it is so comprehensive and comes from a Divine source, has immutable principles of study. If you ignore the rules, you're almost certain to arrive at a wrong understanding.

In researching and writing "Roots," Alex Haley sweated in a boat trip across the ocean, because he wanted to experience how his ancestors felt as they were transported into slavery.

If you want to feel what your Jewish ancestors felt, learn one chapter of Mishnah by heart. That is the Jewish culture at its roots. The beauty of it will get to you. You will appreciate Torah from Sinai. You will understand what the Jewish people are truly about.

How old are you? Over the years, have you learned things about living? Can you list 10 things you've learned?

Often our wisdom is there, but we can't articulate it. Realize that wisdom is your most precious commodity. It should be memorized, on your fingertips.

Right now, take a pen and paper and make a list of the 10 most important things you've learned in life. Make a commitment to review the list every single day, and memorize it for the rest of your life.

Imagine a man who sends flowers to his wife. She's thrilled! So he says to himself, "Gee, I should do this more often." The next time she gets the flowers is a year later. Silly! If he was living with wisdom, he'd know how much flowers can help his marriage, and he'd act on it.

Every night, go over your day. What did you learn that day? Write it in a notebook, or make little index cards. Then, on the first of the month, review your month. "What did I gain? What did I learn about living?"

Why is "Oral Instructions" a Way to Wisdom?

Way #4: Introduce Yourself to Yourself
Deep Breaths
What Happened to the Truth?
The Japanese Everything Bagel Spice Recipe
Comments
MOST POPULAR IN Spirituality
Our privacy policy