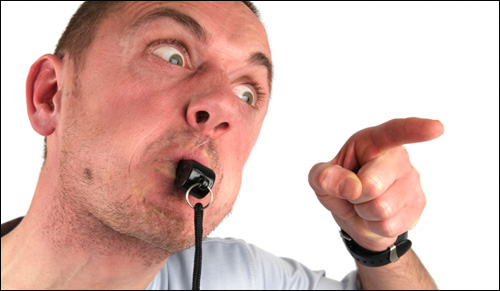 Criticism is not a personal attack, but a way to reach your Olympic-level potential.

Do you love criticism? Probably not. Most people see criticism as a personal attack which triggers all kinds of defense mechanisms.

Way #35 is Ohev et ha'toch'achot – literally "love criticism." Sounds ridiculous? Actually, a business will pay big money to hire consultants to tell them everything they're doing wrong! They'll hang a suggestion box – and if there's a chance to improve business even the words of the janitor are considered by the CEO.

So why does that same CEO get angry when he comes home and hears suggestions from his wife?! The answer is that he's focused on making more money, but may not be focused on becoming a better person.

Realize that every mistake carries with it a negative consequence. By helping to clarify the personality flaw that caused the mistake, criticism can save you from future loss. Your friend will tell you when you've got spinach stuck in your teeth, while your enemy will smirk and say you look great! As the Sages say: "Better the criticism of a friend, than the kiss of an enemy."

You Need It to Succeed

Do you think you're perfect? Of course not. So if you want to reach your potential, look for constructive criticism. When someone is committed to reaching a goal, they'll accept incredible doses of nagging, harassments and insults. Think of what an Olympic athlete willingly endures from coaches!

When we see the benefits, we actually like criticism. Imagine you left your wallet in the post office, and someone calls after you: "Hey! Your forgot your wallet!" Rather than get defensive at the criticism, you'd say, "Thank you very much. Next time I'll be more careful."

One of the reasons we have difficulty accepting criticism is because it comes at times when we're not emotionally prepared. It catches us off guard. On the other hand, when you invite criticism, you're in a position to deal with it calmly – to accept or discard the information. Plus the fact that you're asking for it means you'll select a more reliable source, you're more likely to take it seriously, and... it's good practice for when you get it unexpectedly!

The best method is to get feedback from those who are objective – those who know us best. Once a month, ask a few friends to tell you five ways you could improve. (Ask for five points, because they'll typically start easy – and only the last one will cut to the heart of the matter!)

React in a Good Way

Mention the word "criticism" and we all imagine something negative and painful. The pain that criticism causes stems from wounded pride. No matter what, there is the lurking sense that "I'm no good."

Criticism doesn't mean you're no good. It means, "You're good, but I believe you can be even better."

Squash your defensive instinct. Don't react until you take it home and ponder. You may be embarrassed from the comment, but ask the person to elaborate: "Tell me exactly what's disturbing you. I want to see if there's truth to the criticism."

One method for handling criticism is to depersonalize it. Take yourself out of the picture, and consider: "How would I advise a friend who received this criticism?"

It's painful to discover our mistakes, but it's even more painful to go through life repeating those same mistakes. Criticism is like a needle. It may sting, but the pain passes – and the results will benefit you for a lifetime.

When you recognize that the purpose of criticism is to wake you up and get you on track, then you'll be grateful to your critic. Get in the habit of saying, "Thank you, I really appreciate your pointing that out." Even if you have to mutter it through clenched teeth...

(Don't worry about your pride. If your critic has only said it to put you down, this makes you bigger than him. And it really takes the wind out of his sails.)

When you get criticized:

Appreciate the value of giving others criticism, too. Someone who is suffering spiritually and emotionally needs help just as much as the one suffering physically.

So why do we resist giving criticism? Because we want to be loved, and we think people will resent us for criticizing.

Imagine someone was about to walk into an empty elevator shaft. Wouldn't you run to point out his error? If your child refused to take his medicine, would you walk away and say: "I want him to love me, so I won't insist he take this unpleasant medicine." (Of course, learn to give it with lots of sugar.)

When we clearly see the consequences of mistakes, we feel obligated to help. The Torah says that any love that does not include correction, is false. If you really care, you'll find a way to help – even if he doesn't realize he needs it. Don't be nonchalant. If another person is feeling miserable or acting self-destructively, don't just stand by. Their mistakes will catch up to them and cost them. Be concerned. Help.

When you're indifferent, it's easy to be tolerant of other people's faults. But the more you love someone, the more it hurts to see them living a misguided life. That's why parents – the least indifferent of people, those who love you the most – often give the most criticism. It's precisely because of their love that they can't simply turn their backs and say, "He's wasting his life but I don't care."

Now we understand why the Torah (Leviticus 19:16-18) juxtaposes the instruction to give criticism, next to the command to "love your neighbor as yourself," and next to the prohibition against standing idly by while another is in need. The best criticism comes from a sense of love and obligation to help.

Give it the Way You'd Want It

To help someone change, there needn't be any criticizing, throwing stones, or shouting louder than the next guy. The goal is not just to get it off your chest.

Appreciate how difficult it is to take criticism, and use that sensitivity to shape the way you criticize others. Before criticizing anyone, ask yourself: "How would I feel if I was on the receiving end? How would I want to be told this?"

Because criticism is so valuable, and yet has such potential for damage, it is crucial to "criticize wisely." If your criticism will create animosity or resentment, then it's better not to say anything at all.

The first step in correcting others is to love them. If a person feels you truly have their self-interest at heart, they'll listen to what you're saying.

Give 10 portions of love for every one of criticism. Give love before, during, and after criticism. Reassure the person that you are on his side. Many parents make the mistake of thinking they can criticize their children without emphasizing how much they love them.

The goal of criticism is to get the person to accept the point, and to grow from it. Your challenge is to avoid triggering any defense mechanism. Try something like this:

"I did an inconsiderate thing last night."

"Yeah? What?" your roommate asks unknowingly.

"After I finished eating, I didn't clean up my dishes. I'm sorry."

"Now that you mention it, I also leave my dirty dishes overnight. I'm going to be more careful about cleaning up, too."

Mission accomplished, and no hurt feelings. Of course, not all scenarios are the same, nor is it always so easy to soften the blow. But if you're clever enough, you'll find a way to speak your piece – and keep the peace as well.

Finally, the most effective rebuke is demonstrating through action and deed. If children don't appreciate the beauty and value of being honest, it is probably because their parents are not being careful enough with their own honesty. Otherwise the truth would be obvious to anyone. No arguments, no conflicts. The Talmud says that Moses was able to instruct the people only because he fully exemplified what he preached.

The Hebrew word for criticism, toch'acha, is from the same word as hoch'acha, meaning "proof."

The best way to get someone to change is not through harsh rebuke, argumentation, or intellectual persuasion. The only way to convince anyone of anything is by clear and obvious proof. The person must see for himself what he is doing wrong.

The Midrash tells the story of Elijah the Prophet meeting up with a fisherman:

"Do you study Torah?" Elijah asked.

"No," replied the fisherman, "I'm just a simple man. I am not endowed with any special talent or intelligence."

"Tell me," said Elijah, "how do you prepare your fishing net?"

"Well," said the man, "It's actually quite complicated. First I have to select the proper gauge rope, and then I have to weave the net in a particular pattern to ensure the proper balance of strength and flexibility."

"How do you go about actually catching the fish?" inquired Elijah.

"Oh," said the man, "that, too, involves many complex factors – season of the year, time of day, type of fish, water depth, temperature, and speed of the current."

"When you get to heaven," said Elijah, "you said you plan to testify that you didn't study Torah study because you're just a simple man, not endowed with any talent or intelligence? But your expertise as a fisherman refutes your very own claim!"

Toch'acha is not harsh. Rather, toch'acha is the beauty of reality staring us squarely in the face.

Why is "Loving Criticism" a Way to Wisdom?

Way #28: Protect What Is Precious

Way #18: The Use of Physical Pleasure

Way #7: The True Charisma
Don’t Believe in Other Gods Versus God is One
Seeing Without Eyes
Why Shouldn’t We Eat Whatever We Want?
Comments
MOST POPULAR IN Spirituality
Our privacy policy
Aish.com Is Looking for Great Writers