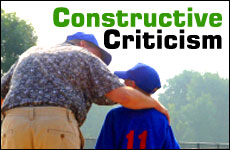 How to give it, and how to take it.

After 40 long, hot years of the Jewish people wandering in the desert, the era draws to a close with the Book of Deuteronomy. This is Moses' swan song, his final appeal to the Jewish people, in which he rebukes them for a variety of mistakes – the Golden Calf, Korach's rebellion, their complaints about meat and water, and more.

Why did Moses choose now -- the final days before his death -- to deliver 40 years worth of pent-up rebuke?

The Torah tells us:

“You shall rebuke your neighbor, but not do a sin in the process.” (Leviticus 19:17)

Rebuke is fine, but not if the effect will be negative. If the other person will get defensive, angry, or not accept the criticism, then it is better left unsaid. In general, rebuke should be done privately and with gentle words.

Moses evaluated that because he was in his final days, his criticism would be accepted by the people, because:

Rebuke must clearly be for the benefit of the other person. They have to know that you care about them, are on their side, and want what's best for them. If they feel you have your own self-interest at heart -- and not theirs -- they won't listen to what you're saying.

That is why Moses specifically delivered the rebuke after defeating Sichon and Og in battle (see Deut. 1:4). He had just reaffirmed his dedication to the people. So they knew that if Moses had criticism, it was only coming from a place of love.

The Proof is in the Pudding

A look at the original Hebrew clarifies this concept. The Torah says: “You should give toch’acha to your neighbor.” Toch’acha is from the same word as hoch’acha, meaning “proof.”

The Torah is telling us that the way to get another person to change is not through harsh rebuke, argumentation, or clever persuasion. The only way to convince anyone of anything is by way of a clear and obvious proof. As the Talmud (Brachot 7a) says: “It is better for a person to realize the truth for themselves, than to have it beaten into them with 100 lashes.”

Remember the story of Joseph and his brothers? After being sold into slavery, and then rising to the position of prime minister, Joseph again meets up with his brothers when they come to Egypt searching for food. (The brothers don’t recognize Joseph because he’s aged and grown a beard.) Joseph gives them a hard time and threatens to take Benjamin hostage. Judah protests vehemently, saying that their father Jacob will be unable to survive the loss of a son.

The key to effective rebuke is to produce a self-realization.

At this point, Joseph reveals himself to his brothers by saying, “I am Joseph; is my father still alive?” (Genesis 45:3) This was Joseph’s toch'acha: “You say that our father won’t survive the loss of a son -- but did you consider that when you tore me away from our father 22 years ago?!”

Nobody like to be told what to do. Therefore it is the act of self-realization which eliminates the defensive reaction... and produces effective toch'acha. Joseph got the brothers to realize the internal contradiction of their own argument. Moses, too, only hinted at the people's sins indirectly -- e.g. alluding to the incident of the Golden Calf by referring to the city Di Zahav ("enough gold").

Toch’acha is not harsh. Rather, toch’acha is the beauty of reality staring us squarely in the face.

The Midrash (Tanna d’Bei Eliyahu, Eliyahu Zuta 14, Pa'am) tells the story of Elijah the Prophet meeting up with a fisherman.

“Do you study Torah?” Elijah asked.

“No,” replied the fisherman, “I’m just a simple man, not endowed with any measure of talent or intelligence.”

“Tell me,” said Elijah, “how do you prepare your fishing net?”

“Well,” said the man, “It’s actually quite complicated. First I have to select the proper gauge rope, and then I weave the net in a particular pattern to ensure the proper balance of strength and flexibility.”

“How do you go about actually catching the fish?” inquired Elijah.

“Oh,” said the man, “that involves many complex factors like water depth, temperature, speed of the current, season of the year, time of day, type of fish and location. I've spent years mastering these techniques, and I’m able to earn a good living from fishing.”

“When you get to heaven,” said Elijah, “you said you plan to testify that you didn’t study Torah study because you’re just a simple man, not endowed with any talent or intelligence. But your expertise as a fisherman refutes your very own claim!”

Did you ever hear someone say he doesn’t have time to study wisdom, visit his mother, or do volunteer work? Yet what about all the hours of TV he watched?

This is toch’acha -- incontrovertible proof.

Of course, nobody likes to be on the receiving end of rebuke.

But if you really want to reach your potential, go look for constructive criticism. Ask for help to get rid of your mistakes. When a person is committed to reaching a goal, they’ll accept incredible doses of nagging, harassments and insults. Think of what an Olympic athlete willingly endures from his coaches!

I didn’t want to miss such an opportunity!

My cousin tells a story about his great-great-grandfather, the revered Rabbi Yitzhak Meir, known as the “Chiddushe HaRim” (19th century Poland). When the rabbi’s grandson (known as the Sfas Emes) was about 12 years old, he stayed awake all night learning Torah with a friend. When dawn broke, they prayed the morning service at the earliest time, and went to bed. A few hours later, the boys awoke and returned to the yeshiva, where they encountered Rabbi Yitzhak Meir. He did not know that his grandson had stayed awake all night studying, and proceeded to rebuke him for not having attended the regular morning service. The rebuke lasted a few minutes, throughout which the Sfas Emes stood and listened attentively, not uttering a word.

When the grandfather had left, the boy’s friend expressed disbelief: “Why didn't you defend yourself against this unwarranted rebuke?!” “Because,” replied the Sfas Emes, “it’s not every day that I get such personalized feedback from my revered grandfather. And I wasn’t about to miss such an opportunity!”

No doubt this is what King Solomon meant when he said, “Give toch’acha to a wise person – and he’ll love you!” (Proverbs 9:8)

One final point: Giving toch’acha is everyone's obligation. We mustn't ignore another person in need. That is why this mitzvah is juxtaposed with the verse: “Don’t stand idly by your brother’s blood” (Leviticus 19:16).

If you really love someone, you can’t stand to see them living a misguided life. Who gives you the most criticism? Those who love you the most -- your parents. It’s because they love you that they can't simply ignore you by saying, "He's wasting time but I don't care."

In truth, we are all interconnected, sharing one destiny. The Talmud says that One who has the ability to influence others and does not do so, shares the responsibility for the others' misdeeds. Similarly, one who positively influence others, shares the merit of their mitzvot. (Sanhedrin 27b; Avot 5:18)

The Talmud (Shabbat 119) says that Jerusalem was destroyed because people didn't correct each other. Today, the Jewish people are hemorrhaging from apathy and assimilation. We must make a pro-active effort to bring Jews closer to their heritage. How?

By being better role models.

Giving toch’acha does not mean criticizing, throwing stones, or shouting louder than the next guy. Real toch’acha is demonstrating through action and deed. If secular Israelis do not appreciate the warmth and sanctity of Shabbat, it is because observant Jews are not keeping Shabbat in the right way. If Jews were truly projecting the beauty of Torah, then the truth would be obvious to all. No arguments, no conflicts. Indeed, the Talmud says that Moses was able to instruct the people only because he exemplified what he preached.

The Sages ask: When the Messiah arrives, how will we know it’s really him? The answer: It will be obvious. Of course, there are technical qualifications, but his basic identity as the Messiah will be self-evident. He will speak words of Torah so sweet and clear, that no one will need to question his identity. It will be a pure outpouring of positive energy that overwhelms everything in its path. That is the beauty of true toch'acha.

The Power of Speech

Don't be a Gossip

Judging Others - And Yourself

Gossip: The Triple Murder Threat
Deep Breaths
What Happened to the Truth?
The Japanese Everything Bagel Spice Recipe
Comments
MOST POPULAR IN Interpersonal
Our privacy policy