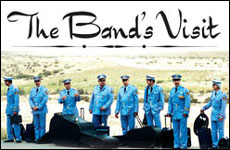 A movie about Israelis and Arabs finding peace with one another.

How many times have we said to ourselves, "If only someone would make a charming comedy/drama in Hebrew, Arabic and English about an Egyptian police band stranded in Israel"? At long last, your prayers have been answered. "The Band's Visit" has arrived and it's a gem. And I'm not just saying that simply because it has already won over 35 international film awards including Best Picture at the Israeli Film Academy Awards, a Jury Prize at Cannes, European Discovery of the Year at the European Film Awards, and Tokyo Grand Prix at the Tokyo International Film Festival.

The ness of its story is a large part of the film's appeal. It opens with Egypt's Alexandria Ceremonial Police Orchestra arriving in Israel to play at the opening of an Arab Cultural Center. Dressed in full regalia and observing all military police protocol, the members of the orchestra are at a pivotal time in their careers. It's not just the political nature of an Arab military police band playing traditional Arab music in Israel that makes this event so important; budget cuts and many reorganizations have threatened the continued existence of the Orchestra. Faced with the heavy burden of this assignment, the stoic conductor Tewfiq (Sasson Gabai) is determined not to foul their excursion.

Despite all Tewfiqs efforts, it's not long before problems arise. The band arrives at the airport with no one there to greet them. Stranded and unable able to contact their Israeli hosts or the Egyptian consulate for help, Tewfiq decides that the Orchestra will persevere with its assignment and orders, and designates Khaled, a sauve young ladies man (Saleh Bakri), to ask for directions. Khaled and the station agent struggle in English, Arabic and Hebrew to communicate, but despite their best efforts, the Orchestra is sent to the outskirts of Bet Hatikvah, a small forgotten Israeli town in the desert.

Faced with an unknown landscape, and disgruntled and hungry men, Tewfiq brings his band members to a small café in the nearby town and humbly asks the proprietor, Dina (Ronit Elkabetz), for lunch. Not wanting the turn the Orchestra away, Dina invites the men to stay with a few of her friends. To punish Khaled for his earlier subordination, Tewfiq orders Khaled to stay with him, while the other men break up and follow their hosts for the night.

With the older Dina and Tewfiq gone from the apartment, Khaled decides to tag along with people closer to his age and convinces the shy and insecure Papi (Shlomi Avraham) to let him join as the fourth wheel on a double date night at a roller disco. When Papi fails to court the girl his cousin set up as his blind date, Papi turns to the suave Khaled for advice. With a little prodding and a lot of direction, Khaled helps Papi break the ice with his date. Director Kolirin excels at milking laughs from silence. Meanwhile, the other band members, headed by second-in-command Simon (Khalifa Natour), stay with Itzik (Rubi Moscovich), which ultimately lead to tensions with his family and to revelations about fulfillment that cross cultural boundaries.

When the band leaves in the morning for their intended destination, it is clear that their unplanned detour was worth the trip. The band finds it must rely on the kindness of strangers – strangers whose nation is a political rival to its own. "The Band's Visit," however is much less about political or even cultural differences than about the idiosyncrasies of human relationships. During the course of the day, each gradually drops his or her emotional shield, revealing his or herself to someone who started out to be a stranger in a strange land.

This gentle, unpretentious comedy breaks down cultural and human barriers through misunderstanding, sympathy, and heartfelt humor

This gentle, unpretentious comedy breaks down cultural and human barriers through misunderstanding, sympathy, and heartfelt humor. It explores the humanity that is common to us all. Director Eran Kolirin writes: "A lot of movies have been made touching the question of why there is no peace, but it seems fewer have been made about the question of why we need peace in the first place. The obvious is lost on us in the midst of the conversations centering on economic advantages and interests. At the end of the day, my son and my neighbor's son will meet, I'm sure of that, in some neon-blinking mall under a giant McDonald's sign. Maybe that is some kind of comfort, I don't know. What is certain though is that we lost something on the way. We traded art for commerce, and human contact, the magic of conversation, for the question of how big a slice of the pie we can get our hands on."

Despite its humor, or perhaps enhanced by it, "The Band's Visit" is, at its heart, a deeply spiritual drama about the bridge-making capacities of hospitality and the way music serves as universal language that draws people together.

Comedy is Calling
It Takes A Lot Of Faith To Be An Atheist
How Instagram Brought Back This Nostalgic Soup
What Makes Eli Run?
Comments