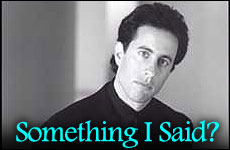 Jerry Seinfeld meets a heckler with an eye for talent.

This story happened in 1979 while I was onstage at "Catch a Rising Star" in New York City. With bare floors, hard walls, and poor air conditioning, almost any sound became a distraction at "Catch."

Five minutes into my set, I heard a guy in the audience talking loudly, trying to be funny or to entertain the other people at his table. I never quite understood why people go to comedy clubs and try to be funnier than the comedian. In my 50 plus years, I don't think I ever heard a loud talker say anything helpful or informative.

When someone in the audience talked during my act, my solution was to stop talking, a technique I learned from my school teachers. So I just stopped talking and the rest of the room followed my lead and looked at the disturbance. A normal person usually became very uncomfortable at suddenly becoming the center of attention and stopped talking. It didn't work for me that night at "Catch."

I continued on when a drink glass, one of those thick, 16-ounce tumblers, whizzed past my head and shattered against the brick wall behind me. It was like one of those western movies where the guy throws a bottle at the mirror behind the bar and shatters all the glass. Everybody froze and watched just the two of us. Actually more people had their eyes on him since he was a proven lunatic.

When someone throws a glass at your head, they can't even lie about it. What can they say? "These glasses sure are slippery." At least at Jewish weddings, the groom steps on the glass, rather than throwing it 50 miles an hour at the rabbi's head.

At least at Jewish weddings, the groom steps on the glass, rather than throwing it 50 miles an hour at the rabbi's head.

I froze on stage, not out of fear, but from anger. Regardless of my mood, from strictly a survival aspect, lots of motion was a better strategy to cope with my transition from comedian to target. Everyone in the audience was looking around -- probably for a fire exit -- or for this night, a "flying drink glass exit." I held the stage, looking forward to seeing this guy tossed out of the club.

About a minute later, the emcee came up on the stage and said, " Jerry, come on, let's go! You gotta get off!"

The dispute went back and forth, but finally the emcee became very animated and adamant. He said, "Come on, Jerry! Let's just go! Get off the stage!" This was quite a change from the usual, "How about a hand for Jerry Seinfeld, folks?"

Maybe it was the absolute fear in the emcee's eyes and the panicked cracking of his voice that convinced me to get off the stage. Anyway, there was no way I'd get the act back on track so I left the stage.

The audience was still applauding for me while the club's bouncer and bartender hustled me out of the club and around the block. "What's going on here?" I said. "This guy throws a glass and I get thrown out! If he throws a table, does he get to manage the club?"

"What's going on here? This guy throws a glass and I get thrown out! If he throws a table, does he get to manage the club?"

It was then explained to me that the glass thrower was a gangster, a hit man for the mob.

This thug gave me a little insight into human behavior that night at "Catch" -- living with the thought that any day your best friend, father, or grandmother might "whack" you can create a volatile personality.

A few months later, Joe Piscopo dealt with the same guy from the "Catch" stage. The thug grabbed Joe and broke his nose. A few hours later Joe returned from the hospital with his face all bandaged up only to find this mobster still sitting in his seat enjoying the show. I guess once you pay the cover price no matter what you do you never have to leave.

I went on to have a TV show. Joe starred on Saturday Night Live. Obviously, this guy had an eye for talent.

Jerry Seinfeld's story is featured in the recently published book "I Killed: True Stories from the Road by America's Top Comics." Click here to order the book.