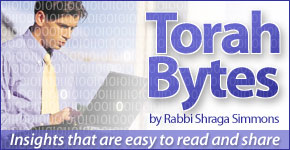 Parshat Acharei Mot discusses the Yom Kippur service in the Holy Temple in Jerusalem. One of the most dramatic moments was when two goats were brought into the Temple, and a lottery was held to determine which goat would be offered on the holy altar, and which goat would be pushed off the rocky cliff at Azazel - as the original "scapegoat."

The Talmud explains that these two goats must be exactly identical in appearance, size, and value. There's nothing apparent to distinguish between them. And it's all decided by lottery - a 50/50 chance to become a holy offering, or to meet a gruesome death.

The Kabbalists explain that this symbolizes the idea of our own free will. At every given moment, doing the right thing is always a 50/50 choice. Most likely, none of us have a real desire to commit murder. And at the other end, it's unlikely that we're prepared to drop everything to go save starving children in Africa. Our real choices are confined to a specific point where, realistically, the choice could go either way, 50/50.

The implication of this is that no one is intrinsically righteous or evil. Rather, at each moment we choose to be - for that moment - righteous or evil, to grow or to stagnate. And then, the aggregate of all those "moments" is what defines our spiritual and moral standing.

Rabbi Hirsch explains that understanding the idea of the two goats in itself brings us to a higher level. For although free will grants us enormous power, if we don't realize that we have this power, we'll let decisions "just happen," without using our free will actively.

The Talmud says: Greater than the gift of free will, is that God told us we have free will. Indeed, as we learn from the two goats, that choice-point can spell the very difference between growth and stagnation ... between life and death.