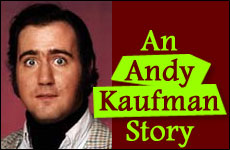 What really happened on that infamous episode of "Fridays"? An insider finally reveals the truth.

"What a nice Jewish boy," I said to myself, when the nice Jewish Elayne Boosler introduced Andy Kaufman to me in 1973. So sweet, so innocently wide-eyed, introverted, shy. Ordinary. Not much personality there. Zero presence or appeal frankly. Seems weak and scared. Brings out the mother in me.

I can't believe he actually has the guts to go onstage at the Improv on such a stellar night. David Brenner just slayed ‘em in the aisles. Richie Lewis is spewing a potently neurotic fifteen minute set. I'm hanging in the bullpen at the bar, withstanding the onslaught of the guys all trying out their incessant one liners on me ("Was that funny? C'mon, that was funny!!") hoping to get my own silly songs on before the audience runs out of laughs and I run out of steam. I follow the Kaufman kid in and stand in the back of the house as Budd Freedman introduces him, angling to watch the imminent disaster, offer sympathy and bat cleanup.

"What an incredibly audacious boy," I thought to myself ten minutes later, as I watched him take captive an audience who weren't sure whether to laugh or spit. He had just played the Mighty Mouse anthem and with a few sung lines and some strange, artfully controlled behaviors, become indelible in all our minds.

It wasn't the last time our paths would cross and recross at the Improv Clubs East and West, on theater stages and television sets. It wasn't the last time I'd be amazed at his daring, moxie, nervy performance art addiction to negative attention and the element of surprise. How could such a politely pleasant, rather dull guy who would years later in Los Angeles take me out for macrobiotic food, keep an eye out while I ran the Fairfax High School track after dark, take breaks from jobs to meditate devoutly twice a day, trying to convince me to do the same, become such a taunting, compelling, confident, charismatic monster when he was "on?"

His characters always seemed to have so much more personality that he did. And why he was never satisfied to be beloved in his character actor roles, like the adorable Latke later on "Taxi," was bewildering to me. But he was an artist on a mission with a vision.

His parents seemed quite loving, normal, as all Long Island Jewish parents seem, his brother an upwardly mobile sort from the more beautiful burbs. Oh how I wanted the tales of psychological suffering and victimization, the damage that wrought his odd impulses, but they weren't forthcoming. I was never able to assess the source of his strange genius, or death defying drive to express it. But I bore the brunt of it one historic night on live TV, back in the day when there were only three networks on our television consoles and minor incidents loomed large.

Larry David, Michael Richards and I, not the best of the stand ups at the time, were cast on ABC's designated clone of Saturday Night Live called "Friday's" in 1979. Jack Burns, our comic, ex Marine of a producer, who ran every "Friday's" rehearsal from the war room in his head, called Mary Edith Burrell, Michael Richards and me into the Green Room just before our live late night show was about to crank up on the air without a net in our second season, 1981. Andy was guest starring for the second time. Our drill sergeant was pacing, stoked by the thrill of a kill festering in his head.

"Andy's gonna bust out of the show tonight," he gleamed. "He's gonna mess up and break the fourth wall from the top of the monolog. It's gonna be great. It's gonna kick our ratings through the ROOF!!"

"He's gonna mess up. It's gonna be great. It's gonna kick our ratings through the ROOF!!"

"Ho, boy," I worried. "Here we go." Kamikaze comedy -- my favorite. How desperate our Network was; ratings pigs before their time. Reality TV was being born on the bleeding edge where shock and awe were more important than art or life. The precious fourth wall*, which the audience trusts to protect it from involvement, was to be irreparably violated that night.

"In the last sketch (which had remained oddly unfinished in rehearsal) he's gonna refuse to go on with the scene. And I want you troopers to just stay in character and improvise, okay? Let him run with it. Make it look real! Good luck, men!"

So we set off on our mission to be compliant in our victimization, while appearing to be enraged. Making fools of ourselves was how we made a living, after all. As promised, Andy petulantly trashed every moment he could from the top of the show, putting down the performers, the writing, the "Friday's" show in its entirety. The audience anxiety was palpably mounting by the moment. Not my idea of a good time, but on we went.

In the last scene of the night, the premise promised: a rather straight couple of couples goes out to dinner and one by one goes to the john and comes back ‘different.' The writer had murmured something about social commentary, but it was clearly just an excuse for the preplanned ‘rave-off.'*

I was playing a prissy uptight wife, and we all proceeded with our insipid dialog. And, of course, as expected, Andy refused to say his lines, began to rant, Michael grabbed the cue cards and threw them at Andy, I tossed a few buttered rolls at him in character, Mary Edith got self-righteously indignant, and our hero Jack Burns leaped into the faked fray to defend the tipsy ship. Pseudo violence ensued, somehow the entire cast materializing to get their punims on camera in the final moments....UNTIL.

Our loyal crew, not let in on the little ‘joke,' frantically red-faced, leapt to our defense, melodramatic Jack's defense, easily outraged Michael's defense, the show's defense, and the purchase of their own weekend homes and boats. They restrained the tortured Andy, while our noble leader, Jack, seemed about to beat him up before the show went black. Not a big fan of violence, even feigned, I retired to the wings in my character, who wouldn't have stuck around for violence either. She and I were embarrassed for us.

All my years of classical training to be remembered for this and as the mom on the cartoon "Rugrats"?

The news shows ran rampant with the story that night and for several days. Even the Village Voice was frothing for interviews with Mary Edith and me. Who could have known how famous we'd get, even infamously memorialized years later in a Milos Foreman film about Andy ("The Man in the Moon,") in which I was played by the illustrious and very blonde comedienne Caroline Rea? All my years of classical training to be remembered for this and as the mom on the cartoon "Rugrats"? Such is an actor's life.

And sadly, who could have known how nice Jewish boy Andy's obsessively making jokes at everyone's expense, crying wolf for so many years, would finally bite him in the chest. He didn't know when to quit, that the audiences had run out of patience, so his body did it for him.

Non smoking, macro meditating Andy got lung cancer in 1983, when the audience no longer bought his tricks. They mocked the shock, until he was a wraith in a wheelchair, and cold in a coffin. He fought that mysterious Long Island cancer like crazy, like he fought everything else normal, but it won when he was so so young.

I was very sad to lose him from life. Beyond his controversial genius, he was really just a nice Jewish boy.

*In improvisation circles, a ‘rave-off' occurs when the players have no ending or point to make beyond entertainment, and escalate hysteria and chaos till they force the scene to be blacked out.

Funny Business
Bechukotai 5782: Divine Retribution
Behar 5782: Working to Live or Living to Work?
The Wholeness of Being Broken
Comments
MOST POPULAR IN Cool Stuff
Our privacy policy