Chanukah: To Conceal and Reveal 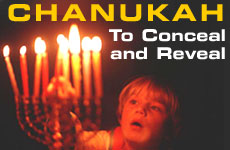 Chanukah is commonly viewed as a celebration of the Jewish People defeating the army of Antiochus and reclaiming political, along with spiritual, sovereignty. What is less well known is that Chanukah also highlights a delicate interplay between conflicting emotions, attitudes and intentions that that are expressed both in interpersonal relationships and in one's relationship with God. The pathway to unlocking Chanukah's hidden message leads us through the Torah portion Vayeshev, which is typically read on or immediately before the holiday of Chanukah.

The portion Vayeshev is filled with instances in which clothing is used to link someone to a particular event:

1. The brothers submit to their father Joseph's blood drenched cloak as evidence that he has been killed. (Genesis, 37:32)

2. The wife of Potiphar (Joseph's Egyptian master) claims that the owner of the cloak she is holding (i.e., Joseph) attempted to seduce her. (ibid, 39:11-18)

3. Tamar asserts that the owner of the cloak, ring and staff currently in her possession (i.e., her father-in-law, Judah), is the father of her as yet unborn twins. (Ibid, 38:25)

Tamar, in contrast, is not trying to deceive. Rather, she is trying to inform Judah that it is his children in her womb. In short, whereas the intentions of Pothiphar's wife and Joseph's brothers are to hide the truth, the intention of Tamar is to reveal it.

It thus comes as a surprise that, when presenting their evidence, Joseph's brothers use terms of speech that are identical not to those of the Potiphar's wife… but to those of Tamar. Tamar, on the brink of a painful death, pleads "Haker Na -- Please recognize." Advocating not only for herself but for the Messianic seed within her, she implores Judah to fully recognize the garments he once gave her. Tamar's sense of urgency, along with her desire for Judah to acknowledge his ownership, is clearly reflected in her choice of words.

Why, though, do the brothers, when submitting Joseph's cloak to their father, say "Haker Na -- Please recognize?" Do they truly wish for Jacob to discover their role in Joseph's disappearance? Using terms that aim toward concealment would have better suited their needs.

It is also ironic that the cloak Joseph's brothers use to identify him for Jacob is the multicolored coat. This is the very garment that the brothers view as the symbol of inequity between themselves and Joseph. Why would they select an article of clothing that is, presumably, invested with such negative and painful emotions?

Based on the above, it is conceivable that Joseph's brothers are communicating with their father on more than one level. On the surface, by altering the cloak to give the appearance of a mauling, they are deceiving Jacob. On a deeper, more subtle level, though, they are confiding to him what they sense is the primary cause for Joseph's dispatch. "Haker Na -- Please recognize. Is this not the garment you gave only to Joseph? Haker Na -- Please consider. The preferential treatment you accorded him sowed the seeds of jealousy and mistrust between us. Haker Na -- Please understand. When we stripped Joseph of his cloak, together with his dignity and freedom, you, our father, may have shared in the responsibility."

What is remarkable about the two levels of communication -- manifest and subtle; deceiving and confiding -- is that they reflect intentions that are diametrically opposed to one another.

The idea that a person (or group of people) is capable of displaying two opposing intentions or two conflicting emotions can be understood from within a developmental framework. Oftentimes, a young child runs away from his mother, even while glancing over his shoulder to see if she is following. When this occurs, the child is balancing his sense of dependence on her with the competing desire to become autonomous. As the child traverses the road to adulthood, this balancing act -- along with the relational dynamic it implies -- does not fully disappear. Rather, it is experienced and expressed in a less obvious fashion.

That Joseph's brothers could subtly reveal to their father the perceived roots of their misdeed, even as they were apparently concealing from him its details, is consistent with this notion.

The above can, likewise, be understood in spiritual terms. We are taught that even at the moment a person transgresses his Heavenly Father's commandments, he experiences an innate desire to relate to Him.1 This is reflected, to an extent, in a person's interactions with his flesh and blood parents as well. When the brothers try to deceive Jacob about their role in the sale of Joseph, they are delivering the second blow to a relationship with him that has already been wounded (in a spiritual-existential sense) by the actual sale. Yet, even as Jacob's children are misleading him, they are secretly confiding to him -- not only that they played a role in Joseph's disappearance, but also their deep seated emotions regarding the antecedents of their misdeeds. This represents a step, however small, being taken by the brothers toward healing their relationship with their father.

A parallel can now begin to be drawn to Chanukah. The assault of Antiochus on the Temple is viewed by many as being the outward manifestation of a more insidious invasion -- that of Hellenistic ideals into the minds of practicing Jews. Faith and belief were replaced by empirical rationalism. The pursuit of physical pleasure no longer served as an instrument of spiritual health; it became an end unto itself. The concept of God was both splintered and reduced from a , transcendent Being, to a pantheon, decidedly human in character. By the time Antiochus defiled the Temple, Jewish sensibilities had themselves degraded and lost their clarity.

It is this spiritual decline that serves as the backdrop for the miracle of the pach shemen --the one-day supply of oil that burned for seven. According to the Chassidic commentator, S'fas Emes, the sealed flask of oil found on Temple grounds symbolizes a small compartment of the Jewish mind that was as yet untainted. Even as those who pursued Hellenism largely abandoned the ideals of Judaism, there remained in their heart of hearts a desire to believe, a yearning for spirituality and an understanding that God is One. That single flask and what it symbolizes is what fueled the Jews' recovery of political sovereignty and spiritual integrity.

The emergence of the pure oil from within a dominant spiritual climate of defilement is not an accident. Similarly, the articulation of "Haker Na -- Please recognize" from within a larger communication pattern of deception is not a coincidence. Even as God allows for the possibility of our straying from Him, He guarantees that there will always be a small corner of the soul that still yearns for closeness to Him. Similarly, even as some children move away from the ideals of their parents, God ensures that they retain (in the least) a faint attraction to those ideals, along with a need for closeness to their parents.

There is much to be gained by carefully attending to covert requests for nearness that are embedded in louder, more obvious attempts to distance. This is particularly the case when the person sending these apparently contradictory messages is someone for whom we care. By identifying, nurturing and responding to these subtle strivings for intimacy, we become partners with God in allowing our friends and loved ones to come closer.

Rabbi Yehuda Krohn, Psy.D. lives in Chicago with his wife and children. As a Licensed Clinical Psychologist in private practice, he works with individuals, couples and families.

Taking Up Arms
Can You Show Me This "God?"
How to Become Immortal
Judaism and Mental Health
Comments
MOST POPULAR IN Chanukah
Our privacy policy
Aish.com Is Looking for Great Writers