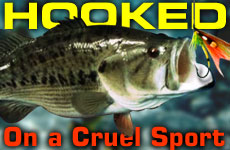 Finding gratification in the suffering of another isn't sport. It's sadism.

I'm not a vegetarian. I eat meat, fish, and fowl. I don't oppose experimenting on animals when necessary for medical research. I like zoos. I have no moral objection to wearing fur or leather. I think it's okay to keep pet dogs on a leash and birds in a cage. And while I admire the work of the American Humane Association, I am no supporter of PETA (People for the Ethical Treatment of Animals) or its fanatic agenda.

But I do think sport fishing is cruel.

I have no quarrel with the man who takes a salmon out of the water and eats it for dinner.

By sport fishing I mean catch-and-release fishing -- fishing for fun and adventure, not for food. I have no quarrel with the man who takes a salmon or trout out of the water and eats it for dinner, even if he greatly enjoys the taking. What appalls me is fishing for its own sake. I don't doubt that it can be thrilling to drag a fish through the water by a barbed hook in its mouth, or that there is pleasure in making it struggle frantically, or that it is exciting to force a wild creature to exhaust itself in a desperate bid to get free. I don't deny the allure of it all. But finding gratification in the suffering of another isn't sport. It's sadism.

One of PETA's billboards shows a dog with a barbed hook through its lip, and asks: "If you wouldn't do this to a dog, why do it to a fish?" PETA's analogies are frequently tasteless and morally repugnant, but this one is exactly right. No one would throw Fido a Milk-Bone with a hook hidden inside and then, when the barb had pierced his mouth and he was trying violently to shake it loose, drag him to a place where he couldn't breathe. Anyone who did such a thing would be condemned for his brutality. Is it any less brutal to do it to a fish?

Writing a few years ago in Orion, a magazine about nature and culture, essayist and avid outdoorsman Ted Kerasote opened a piece about the ethics of catch-and-release fishing with a quote from a fellow outdoorsman, "the philosopher, mountaineer, and former angler Jack Turner."

"Imagine using worms and flies to catch mountain bluebirds or pine grosbeaks," Turner told him, "or maybe eagles and ospreys, and hauling them around on 50 feet of line while they tried to get away. Then when you landed them, you'd release them. No one would tolerate that sort of thing with birds. But we will for fish because they're underwater and out of sight."

I can hear the indignant reply of countless anglers: Fish are different! Unlike dogs and birds and other advanced animals, fish don't feel pain. The hook doesn't hurt them.

But there is mounting evidence that fish do feel pain. A team of marine biologists at Edinburgh's Roslin Institute make the case in a paper just published by the Royal Society, one of Britain's leading scientific institutes. Their experiments with rainbow trout prove the presence of pain receptors in fish, and show that fish undergoing a "potentially painful experience" react with "profound behavioral and physiological changes . . . over a prolonged period comparable to those observed in higher mammals."

Other studies have demonstrated the agitated responses of fish to painful conditions, from rapid respiration to color changes to the secretion of stress hormones. Does this mean that a fish feels pain in just the way we do, or that its small brain can "understand" the painful event? No. It does mean that the ordeal of being hooked through the mouth, yanked at the end of a fishing line, and prevented from breathing each time its body leaves the water is intensely unpleasant and distressing. To put a fish through that ordeal in order to eat fresh fish is one thing. But to do it for fun?

Anglers tell themselves that catch-and-release fishing is more humane and nature-friendly than catching fish and killing them. That strikes me as a conscience-salving fib. Hurting an animal for enjoyment is never nature-friendly, even if the animal doesn't die. Sport fishing is clearly more cruel than hunting. Hunters don't torment their prey or force it to engage in frenzied combat. They aim to kill the animal, as quickly and painlessly as possible. But how many sport fisherman want a quick kill? Where's the excitement in that?

"We angle because we like the fight," Kerasote writes. "Otherwise all of us would be using hookless [flies] and not one angler in 10,000 does. The hook allows us to control and exert power over fish, over one of the most beautiful and seductive forms of nature, and then, because we're nice to the fish, releasing them 'unharmed,' we can receive both psychic dispensation and blessing. Needless to say, if you think about this relationship carefully, it's not a comforting one, for it is a game of dominance followed by cathartic pardons, which . . . is one of the hallmarks of an abusive relationship." (His essay in Orion, by the way, was titled "Catch and Deny.")