Passover is the season to dispel falsehood and pursue truth.

She stood joyfully playing with her prized possession: a two-week-old red birthday balloon.

My one-year-old daughter Sari chased the failing balloon around the living room. She happily touched and stroked her newfound toy, a wide smile spreading across her irresistibly pinch-able cheeks.

Suddenly, as she reached up to grab the bobbing balloon, a loud bang shook the room.

She looked up and then all around, desperately searching for her inflated toy. But alas, it had magically disappeared.

Peering down, she picked up the remains of the burst balloon. She fingered the rubbery torn remnants in her tiny hand, upset that her cherished toy, which provided immense pleasure and delight, had, in one instant, vanished into thin air.

What people dream of is often a good indication of their value system, what is sacred and precious to them. Financial success, prestige, honor, fame and wealth are typical goals in Western society.

All it takes is a major life event for the balloon to burst.

Yet such goals often prove superficial and illusory. All it takes is a major life event -- being fired from a job, or the death of a close relative -- for these ambitions to shatter. For the false dreams to puncture. For the balloon to burst.

What is one then expected to do? He is left to seek out the truth and to face reality.

Passover is the festival that celebrates the historic event of the Exodus. The Jewish nation gained their freedom from Egyptian bondage. It was a two-tiered freedom -- physically and ideologically. As much as it involved the physical departure from Egyptian soil, nationhood required shaking off the idolatrous Egyptian practices and value system.

Passover commemorates that time of year when the inflated balloon of illusion is punctured by the confrontation of reality. This is symbolized by the two foods upon which the festival revolves: 1) On Passover we eat matzah, and 2) we do not eat chametz, leavened bread.

Matzah and chametz are identical ingredients: flour and water. Why is one consumed and the other not?

Matzah and chametz are made of identical ingredients: flour and water. Why then is one consumed and the other not?

The commentators explain that when dough is left for more than 18 minutes before baking, the fermentation process sets in and it becomes chametz. By contrast, matzah is baked before the dough has time to become leavened.

These two foods correspond to emet, truth and sheker, falsehood.

Consider: The deliciously fluffy, tasty food of chametz projects an image of what it is not. It is the yeast, the bloating up of the dough, that expands beyond its true size. In this respect, it can be seen as an illusion, a falsehood.

It is not surprising that the Talmud (Brachot 17a) sees leavened bread as symbolic of the Yetzer Hara, the self-destructive urge to move away from God. It is the aggrandizement of ego that leads to a false sense of identity and security -- the catalyst for transgressing God's will.

Indeed, the biblical paradigm of transgression is the Tree of Knowledge in the Garden of Eden where Adam disobeyed God's command not to eat. The chassidic work “Bnei Yissachar” notes that the gematria (numerical value) of se'or, yeast (501) and chametz (138) equals the value of Eitz HaDa'at, the Tree of Knowledge (639). This primal sin forged the root of human inclination to pursue false mission and purpose.

Passover celebrates Jewish redemption from the false ideologies of Egypt. Thus on Passover, when it is forbidden to eat chametz, the message is clear: Foreign ideologies, symbolized by chametz, are to be "driven out of the Jewish home." They are to be eradicated and nullified from one’s possession.

Foreign ideologies, symbolized by chametz, are to be eradicated and nullified from one’s possession.

Only the undiluted truth can combat human arrogance. The manufacture of the simple, flat matzah from flour and water produces a flat, tasteless wafer. It is a basic product, true to its source without any additives, inflation or hype.

At the Exodus, where the Egyptian wizardry melted away in the face of God's supernatural intervention in the natural order, we gained a clear glimpse of the Creator Whose insignia is emet (Talmud - Shabbat 55b). The falsity of the Yetzer Hara is nowhere to be found in the trailblazing path emergence of the Jewish nation.

In this new environment of post-Egyptian bondage, the Jewish nation's journey toward the Holy Land continued their spiral upward toward emet. The commencement of the 400-year decreed exile (counted from the birth of Isaac) was followed by 40 years in the wilderness, and then the Jewish people entered Israel the following year -- the 441th year. It is no coincidence that the numerical value of emet is 441.

Passover is the occasion when the authentic Jewish reality and worldview rise to the surface, as the Jewish people commit to living up to their forbear Jacob whose attribute was emet. We nullify false and inflated pretences, symbolized by chametz, and travel the path toward Torah.

The balloon bursts, replaced by the simple, holy truth of matzah.

Osher Chaim Levene writes for the Hamodia Newspaper and for other Jewish publications. He is the author of Set in Stone on the reasons for the mitzvot and most recently, People of the Book: from Adam to Yehoshua: Personalities of the Torah, published by Targum Press. 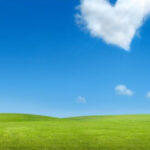 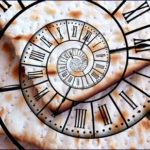