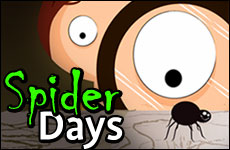 I am Mother, hear me roar.

I am torn from the curtain of too-little sleep by the blood-curdling screams of three children -- all mine.

"Mommmmmmmmy!! There's a huge spider in our room!" There is no turning back to the temptations of sleep; I get out of bed grumbling.

They're right; the spider is huge and perched comfortably above my daughter's top bunk.

"It deserves to die," she intones solemnly, condemning the intruder to instant death. Her two brothers nod in agreement. They look at me expectantly. The Big, Brave Mother will -- indeed, she must -- save the day.

I pull myself up to the top bunk awkwardly. Never mind we have 30 minutes to be all dressed and at school or forever endure the principal's reproaching gaze. Never mind that everyone is still in pajamas -- myself included. The hairy spider on the wall stops the traffic of life in midstream.

This seemingly simple directive is not so simple. My daughter doesn't want her own school shoes tainted with the guts of the offending creature. My sons are of similar mindset. They volunteer the flip-flops accidentally left behind by the neighbor but it seems a unethical to use them. Finally an agreement is reached, and they throw up the shoe.

I pause for a moment. My conscience bites me even as my children watch. He's not hurting anyone; maybe I should just try to take him outside.

They are transfixed -- their eyes dart from spider to mother and back again. I raise the shoe...

And the spider jumps. Boy, does it jump. Right onto my daughter's bed.

The screams in the room become alarming. Pandemonium ensues as the eight-legged very unwelcome guest burrows somewhere in my daughter's linen. My children inform me that they will no longer be sleeping in their room. Twenty-five minutes until the school bell rings.

I make a very meticulous search, pulling the bunk bed away from the wall with exaggerated care. I see large dust balls, a half-eaten apple, and the toy they were looking for all last month. I poke the bedspread, the sheet, and the crevice where the mattress meets the Bunkie board. No spider.

Five minutes later, I inform them that the spider is gone and I will continue a thorough investigation into its whereabouts later. In what can only be attributed to a miracle, we are all dressed and out the door on time.

Despite a happy and uneventful afternoon, bedtime prompts an immediate trip down memory lane stopping at our sworn enemy, The Spider.

Faced with the very real threat of sharing my bed with three children, I do something I rarely ever do: I lie.

To make matters worse, it is Friday night and we forget to keep the hall light on. The murky shadows, bearable at other times, now evoke intense spider fears. A mutinous cry rises up, and faced with the very real threat of sharing my bed with three children, I do something I rarely ever do: I lie.

"The spider is gone," I tell them in as calm a voice as possible. "He's dead."

They eye me suspiciously. If there is one thing I tell my children, it's to be truthful.

Forgive me, God, my trespasses. It is late and I need them asleep. Please accept a prayer from a tired mother and do not show me up in my lame little half-truth.

"How do you know?" my son asks. They want hard evidence.

"It must be dead," I insist. "I searched the whole room and didn't find him. It's a big spider, we would have seen it. Either it's dead or it's at our neighbor's house."

They waver, and in that tiny instant of hesitation I scoop them up and put them into bed with vaguely calming words about their assured safety from all things arachnoid.

Shabbat morning I awake to a terrified scream.

"The spider's on the floor! It's on the floor!" I stumble out of bed as the scream swells to all-out frenzy. It's not a spider; it's a Lego helmet. My children are becoming delusional, and so am I. Visions of wringing that spider's furry little throat flash through my exhaustion.

I show them the helmet. They laugh. Ha, ha -- very funny. I go back to sleep.

A few minutes later, I am awakened by a series of triumphant shouts.

"Mommy!" they burst into my room excitedly. "The spider's dead! We found it under the bed and ants are already eating it."

Is there newfound respect in those shining eyes as they joyously renew their faith in me and my words? I can feel their thoughts as they watch the gruesome spectacle on the floor. She's our mother -- she's always right.

One day perhaps I will need to come clean with them and reveal that all the extraordinary superpowers I claim to manifest -- from knowing who stole the toffees to prophesying about dead spiders -- are all an illusion. As a mother, I fly by a wing and a prayer all day long, and as every pilot knows, there are good days and there are bad ones. And then there are Spider Days. They start off nightmarish and they end up rather dreamy.

Thank You, God, for the gift of motherhood.

It's All in the Name

A Woman's Work Is Never Done

Faith in the NICU
What Makes Eli Run?
The Tyranny of Materialism
Science Enters the Mysterious Inner World of Consciousness
Comments
MOST POPULAR IN Family
Our privacy policy