Spider-Man on the Roof 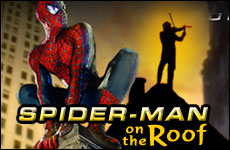 The creator of a Jewish superhero comic book series weaves a web between Spider-Man 2 and Broadway's Fiddler on the Roof. Fasten your seatbelts…

Does Spider-Man's struggle to find himself resemble the dilemma of the modern Jew in America?

Not really. It may more closely resemble the small-town, impoverished rural
Jews of Czarist Russia.

I ask for your indulgence in my examination of Spider-Man 2, stretching some
of the gossamer webbing very thin, back to a small fictional town called
Anatevka in what may be the most popular piece of Jewish pop culture in
history. Just read on, nod a little and nobody gets hurt.

In a recent interview, Alfred Molina, currently starring as Tevya in the umpteenth
Broadway revival of Fiddler on The Roof, challenged me, well not me personally, but in mentioning his part as mad scientist Doctor Octopus in the new Spider-Man movie and his role as Tevya the milkman on Broadway, he remarked that he has a career strategy of picking each acting role as different as possible from the previous one.

So I got to thinking: How different are the two, The Spider-Man super-sequel that was almost entitled "Spider-Man No More" and the new production of Fiddler on the Roof on Broadway?

Spider-Man's dilemma of how he can remain a hero to the unbalancing detriment of his career, bank account, education, social life and commitment to family, (not to mention him swinging from the tops of skyscrapers) evokes Tevya's opening monologue:

"In our little village of Anatevka you might say every one of us is a fiddler on a roof. Trying to scratch out a pleasant simple tune without breaking his neck. . . You may ask, why do we stay up here if it is so dangerous?"

And that's basically the same question asked by college student Peter Parker, who, thanks to a bite from a genetically modified spider, became Spider-Man.

In the first movie, his loved ones suffer because of his commitment to a life that carries serious obligations. As this new film opens we see his failure to eke out even a modest living, as his secret identity prevents him from keeping a job, a class schedule or any other commitment.

Like Fiddler, Spider-Man 2 begins with the impoverished hero making the rounds with his dairy products (Parker is a delivery boy for Joes' Pizza) and just as Tevya's horse loses a shoe right before the Sabbath, Peter's pathetic little scooter gets broken at the most inopportune time imaginable.

Like Tevya, Parker suffers from an almost comical inability to make a living. With a landlord hounding him, his aunt May threatened with foreclosure and eviction (not unlike the inhabitants of Anatevka) a professor threatening to fail him, and an abusive couple of downsize-happy bosses, Peter asks himself why he should be fighting crime… fiddling around on rooftops.

Like Spider-Man leaping off of skyscrapers, at times it may seem like near-suicidal madness, but for generations, millions of Jewish families lived every day in danger of their lives.

This is the Jewish heart of the matter: the issue of balancing one's identity, the haphazard dance of living life on the edge, in constant danger of falling one way or the other. Just how much Jewish commitment am I capable of? How flexible can I be Jewishly without myself or my children stumbling onto a slippery slope into the abyss of assimilation?

Like Spider-Man leaping off of skyscrapers, at times it may seem like near-suicidal madness, but for generations, millions of Jewish families lived every day in danger of
their lives.

There were those who assimilated or converted, left the small-town shtetls for Moscow or elsewhere, shaved their beards, ditched their head-coverings, changed their names and neither looked back, nor were seen by the Jewish community again. (Similar, perhaps, to a story where Spider-Man tosses his suit in a trash can in order to leave his super-past behind.)

Historically, there were those who could have left their Jewish community but chose to stay, literally putting their loved ones in danger every day, just by remaining part of the Jewish community… because they believed that living a Jewish life was important enough to take those risks.

In a certain way the historical obligations of the Jewish people are somewhat like the obligations of super-heroes. We have a never-ending set of tasks including -- prominently -- helping those in need. We are called upon at times to make tremendous sacrifices and to lead lives that can include much that is unfamiliar to others. At times, to protect ourselves and our loved ones, we have had to go underground, adopt other identities. And in every generation there is someone like Spider-Man or someone like Tevya, who holds
up a mirror to the sacrifice and its consequences, personal, financial or otherwise.

After the first 15 minutes of Peter Parker's life on screen, I can't say the audience would have been surprised if he looked skyward and began to sing Tevya's signature song "If I Were a Rich Man."

On top of ruining his life, it seems as if Peter's spider-powers might be vacillating at inauspicious times. The webbing material which he shoots out of his hands and which he may have begun to take for granted, fails him. He looks longingly at his hands, suddenly empty of webshooting stuff, but Peter could just as believably be looking at his palms bemoaning his fiscal empty handedness.

But maybe there's a relation between the two. Just as Peter Parker, when leaping from a building, must have faith that he will have in hand (literally) the light thin life-saving substance that makes all the difference between life and death, the Jewish people once counted on another white gossamer material without which we would have been lost.

In the wilderness for 40 years, the Jewish people counted on a miraculous white, thin-yet-powerful substance, the life-sustaining manna. The biblical story is considered an important lesson in faith, as manna could only be gathered in quantities sufficient for that one day, except for Friday, when there was an extra portion for the Sabbath. In perhaps a similar way, Peter Parker must make a leap of faith, confident that the webbing will carry him from building to building and not fail him over midtown. Sort of like the sad little portions of milk and cheese Tevya distributes, hoping that the meager payment he receives for them will be enough to get him and his family to their next Sabbath.

With his selfhood challenged, Peter, faced with a reality that he cannot speak of openly, invents a dream. With memories playing a vital part in this film, Spider-Man's life is haunted by two 'ghosts' from the first film: his memories of his Uncle Ben, whose sage advice and tragic death made Spider-Man a hero, and his friend Harry's memory of his own father, secretly the villainous Green Goblin, played to chilling perfection in the first
Spider-Man movie and in flashbacks here by Willem Dafoe.

Similarly, in Fiddler on the roof, Tevya invents a dream with two ghosts, Fruma Sarah and Grandma Tzeitel, one threatening to thwart human happiness with murderous vengeance, and one pointing the way to bliss, bearing a promise that a blessing will be forthcoming to those who do what's right.

On Broadway, Molina, a really remarkable actor with a winning smile and a gift for accents, delivers a beautiful performance. His Tevya lives up to the character's reputation, famous for waffling, alternating, even equivocating. "On the other hand," he reasons numerous times during the play, continually trying to see all acceptable alternatives.

The dramatic high point of the show occurs when, after always being able to solve a problem by looking at "the other hand," one daughter crosses the line, relinquishing Judaism and the Jewish community entirely. He says bleakly, "On the other hand… there is no other hand!!"

Well now, there is another hand -- four of them. Molina plays the multi-limbed Dr. Octopus, an affable genius scientist who is trying to serve mankind by creating laboratory fusion which, if harnessed properly, could provide enough energy to turn the world into a paradise.

But there are four snakes in His Eden. Doctor Octopus has created four mechanical arms -- tentacles really -- whose artificial intelligence is no more under control than the fusion mini-sun he is obsessed with creating. He thinks he can retain control, but the arms turn him into their evil puppet.

The 'Revolutionary' technology out of control evokes another character from Anatevka. To Perchik, as to many other Jews under the Tsars, Communism seemed the solution to all their problems. That is until, like Doc Ock's fusion mini-sun, it began to suck in everything around it, finally bringing down the very roof on which everyone's been trying so desperately to fiddle.

SHTETL ON A TRAIN

Doc Ock is really only his nomme de villainy. He starts out as kind-hearted Dr. Octavius. (pronounced Ock-Tevyas). Like those perpetrating the community-threatening pogrom in Fiddler on the Roof, Doctor Octopus is only following orders. Still, Spider-Man's personal relationship with New York is underlined by a subway car full of people who stand together in times of crisis, just like the good people of Anatevka.

Like Peter Parker, and like Tevya before him, we all have something innate making us incapable of permanently, irrevocably denying who we are, although sadly, we sometimes wish and pray otherwise.

Which brings us back to "If I were a Rich Man." When Peter Parker is suffering from his appointed role in life, seeing his gift as a curse and wishing he wouldn't have to bear his heavy burden, your heart goes out to him. You can almost see him looking heavenward singing:

Alan Oirich writes on Jewish issues, film, and superheroes - in this case, simultaneously. He is the creator of the Jewish Hero Corps, the Comic Book team residing at www.jewishsuperhero.com

The Rose that Never Blossomed
Grilled Israeli Lamb and Veggie Kabobs Recipe
How To Barbecue Like an Israeli
Pain is a Reality; Suffering is a Choice
Comments
MOST POPULAR IN Arts
Our privacy policy